The Cost of Living Continues to Rise for Bay Area Residents 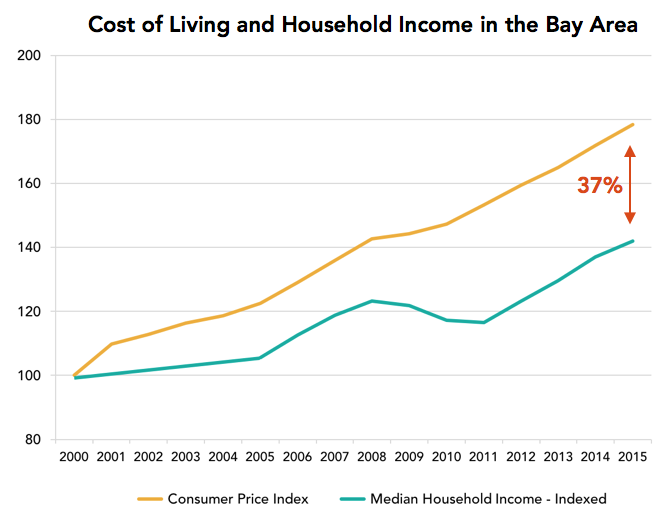 The Bay Area has recovered from the Great Recession faster than the rest of the nation, and has proven to be resilient to economic downturns. Labor force participation and job growth rates have surpassed those of the nation. Nonetheless, despite the region’s economic success households have not seen their income rise at a fast enough pace to keep up with the rising cost of living.

According to the Bureau of Labor Statistics, the Bay Area Consumer Price Index (CPI) reached 258.5 in 2015. The index takes into account the cost of shelter – for homeowners and renters – as well as the cost of everyday expenses such as apparel, transportation and medical care. Between 2000 and 2015, CPI saw an increase of 78.4%, one of the fastest growing cost of living for US metro areas. During the same period, the median household income in the Bay Area saw increased from $73,000 to $103,600, a 41.9% total increase 36.5 percentage points behind CPI.

To put things into a national context, the 2015 annual CPI for the whole nation was 237.01 and only saw a .1 percent increase from the previous year. On the other hand, the San Francisco-Oakland-San Jose MSA’s CPI for 2015 was 258.57 saw a 2.6 percentage growth during the same period.

While the Bay Area’s increase in CPI surpassed the nation’s by only a few percentage points, the Bay Area is one of the most expensive regions in the country with median home sale prices tripling the nation’s average. In 2015, the average home sale price in the Bay Area was $766,394, while the nation’s was $247,600. Similarly, Bay Area renters pay among the highest prices for rent in the nation with thirteen Bay Area cities ranking in the top 20 nationally. Listings for one-bedroom apartments in Palo Alto, San Francisco, and Cupertino averaged $3,423 in 2015.