China and the San Francisco Bay region enjoy a 160-year relationship dating back to the first arrival of immigrants during the Gold Rush. New arrivals came in the tens of thousands, built railroads, panned for gold, fished the Bay, worked as servants, started businesses and built thriving communities in San Francisco, Oakland, San Jose, Sacramento and the Delta.

Since then, successive waves of immigrants from Hong Kong, Taiwan and mainland China have made important contributions to the regional economy—as business owners, and most recently as entrepreneurs with advanced degrees in science, technology, engineering and mathematics.

The Bay Area has also contributed to China’s development as a global economy. The region’s universities, research laboratories and companies have played a role in building China’s Internet; reforming its legal and judicial systems; planning new, sustainable buildings and communities; and supporting entrepreneurial growth.

Immigrant workers from China have grown as a percentage of the Bay Area's foreign-born workforce. 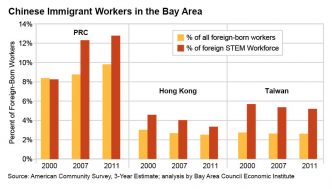 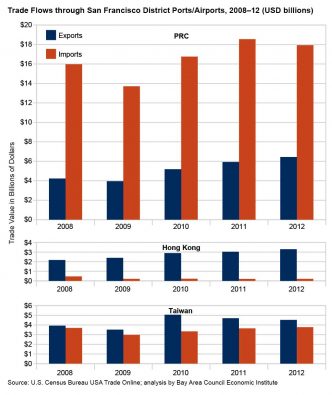 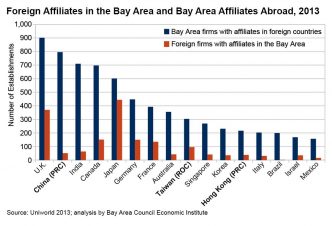 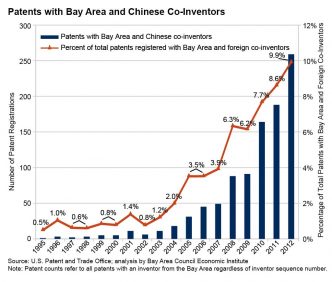 China’s admission into the World Trade Organization (WTO) in 2001 marked the beginning of an explosion in investment and trade that changed the global landscape, stimulating massive investment in China—primarily in manufacturing—and generating large Chinese trade surpluses that have produced more than $3 trillion in foreign exchange reserves. The 2008–09 recession marked a change, however. Nearly two decades of double-digit GDP growth ended, and with it the dramatic expansion in U.S.-China trade. Trade growth has resumed but is slower; the assumption of a continuous and steep upward economic trajectory has given way to new pragmatism.

Within China, the largest mass rural migration to cities in world history is continuing. Rising wage and land costs are pushing new industrial development away from highly developed cities such as Beijing and Shanghai, to Tier 2, Tier 3 and interior cities. And a growing and sometimes restive middle class is pressing the government for improved working conditions, a cleaner environment, a stronger social safety net and continued upward mobility.

These trends point to important synergies, as the San Francisco Bay Area is a global center for much of the talent, innovation and technology crucial to China’s continued economic transformation.

Chinese students have made an important contribution to the region’s economy. Many have chosen to remain in the area after graduation, supporting technology innovation, launching start-ups, and becoming angel and venture investors.

Trade with China is growing, but more slowly than in recent years.

As China’s middle class broadens its horizons, the number of Chinese travelers to the U.S. is growing. The Bay Area is a prime destination.

Cross-border investment and collaborative innovation are growing. The presence of Chinese companies in the Bay Area is increasing, as is the presence of Bay Area businesses in China.

While China remains an important manufacturing base and markets continue to grow, Chinese objectives have broadened to include indigenous innovation and the creation of globally competitive Chinese brands. As a result, today’s business environment is increasingly complex.

Bay Area architecture and planning firms have brought cutting-edge design and sustainability principles to Chinese cities, as China has embraced daring forms and sustainable design, with planning and construction taking place on an extraordinarily scale. In the last decade, Chinese demand has helped keep a number of Bay Area firms afloat, particularly as new construction in California and the Bay Area contracted, and as China’s stimulus spending ramped up. A revival of construction in California and the Bay Area now offers increased opportunity at home, but Bay Area architecture and planning firms remain in demand due to their prestige and reputation for leadership in sustainable design.

China’s pressing need for renewable energy and environmental solutions and California’s expertise in both cleantech and environmental management (primarily concentrated in the Bay Area) point to further synergies. Cleantech markets in both the Bay Area and China are growing, but that has also brought political complexity.

Foreign-owned banks in China continue to face headwinds. The most sophisticated global banks make money but have small shares of an already thin slice of an otherwise huge market. Wells Fargo Bank has two branches, in Shanghai and Beijing. Bank of America’s Asia-Pacific operations activities, with 27,000 employees, are headquartered in Hong Kong, with client-serving offices in Beijing, Guangzhou and Shanghai. Opportunities are growing to serve mid-market U.S. companies with operations in China, and Chinese companies that are expanding internationally. Bank of Tokyo-Mitsubishi UFJ has been active in China since 1980; its U.S. subsidiary Union Bank leverages this China presence through its Global Business Coordination Unit in San Francisco. Silicon Valley Bank has a strong focus on tech and innovation-centered companies and has subsidiary offices in Shanghai and Beijing and a banking license to handle onshore dollar-based transactions.

Hong Kong and Taiwan banks have a long his-tory in the Bay Area, and now PRC banks are making an initial approach. Industrial and Com-mercial Bank of China (ICBC) has five Bay Area retail branches—in San Francisco, Oakland and South San Francisco—through its 80 percent interest in Bank of East Asia, a Hong Kong-owned bank chartered in the U.S. The Bank of Communications has been approved to open in downtown San Francisco its second wholesale branch outside New York.

As the Internet matures, it has become the nexus where computing and communications intersect, for consumers and increasingly for enterprises. China has been quick to embrace this change, and the Internet in China begins with the smartphone. In 2013, one in three smartphones sold in the world were sold in China.

Oracle serves its top 500 enterprise accounts in China—mainly large institutions, government agencies and state-owned enterprises, such as China Mobile, China Telecom and China Unicom— through a dedicated sales force and has an R&D center in Shanghai. Cisco was instrumental in developing China’s Internet infrastructure and works with universities and provincial governments to expand delivery of public services. Intel has production facilities in Shanghai, Chengdu and Dalian.

Tech companies active in China since the 1980s face challenges from both technological change and from Chinese competitors. Global web portal Yahoo! and search firm Google once enjoyed lead positions in China but were caught between government surveillance, censorship policies and competition from indigenous portals. Yahoo eventually traded its China operations and $1 billion to Alibaba.com for a 40 percent stake. Google took down its China site and moved its servers to Hong Kong in 2010 to offer unfiltered search via Google.hk. Its Android operating sys- tem, however, is found on most Chinese-made handsets and enjoys a 90 percent share of the China mobile phone market.

iPhones are considered a luxury in China and sell mainly to high-end customers in major cities. As a result, Apple (served by China Unicom) has only a 4.2 percent share of China’s mobile phone market. The September 2013 launch of its less expensive iPhone5c in partnership with China Mobile, however, is expected to increase its market share.

Bay Area firms are taking advantage of China’s growing pre-clinical and clinical trial research capacity, conducting trials at lower cost and in shorter time frames than in the United States. Chinese pharmaceutical, biotech and medical device firms are also looking to the U.S. for partnerships and M&A that combine cutting-edge U.S. science with low-cost production to more deeply penetrate Chinese and global markets. They are also investing in the Bay Area.

The environment for foreign direct investment (FDI) between the U.S. and China is changing at both ends. Some U.S. investors in China have taken a defensive posture, favoring greater China plays—financial services in Hong Kong, and tech manufacturing in Taiwan—that leverage the mainland market. Venture and private equity groups are favoring later stage investments in companies with proven management and business models. Fund managers are using the Five- Year Plan as a roadmap to invest in sectors that address identified national priorities and enjoy government support.

The biggest news, however, is the dramatic growth in outbound investment from China to the U.S. and other countries. Chinese FDI in the U.S. has been rising strongly, setting new records every year since 2009. Some proposed Chinese investments have failed, primarily due to strategic or security concerns. In response, a new strategy may be emerging in favor of deals under $500 million; joint ventures, partnerships and equity stakes rather than outright acquisitions; a focus on privately held versus publicly traded firms; and avoidance of companies that are likely to raise strategic or security concerns.

New organizations have joined the already-rich landscape of institutional connectors between Bay Area and China business.

Several specific areas of opportunities emerge from this analysis.

The Bay Area is in a strong position to interpret China to the U.S., and the U.S. to China, as it continues to build a positive, multifaceted relationship.

While China will remain a sometimes controversial topic in Washington, states, regions and private companies tend to see China more pragmatically. The Bay Area has shown a particular affinity and openness to China, and ever since the historic creation of the Shanghai-San Francisco Sister City Committee, has reached out to develop new relationships and channels. New in- termediary entities such as ChinaSF and the Bay Area Council’s Shanghai and Hangzhou offices exemplify this trend and provide platforms for continued business growth.

The wealth of opportunities outlined in this report does not suggest that China will be an easy place to do business or that significant barriers don’t exist. China’s economy is slowing, labor costs are rising, and competition from Chinese firms is increasing both in China and overseas. Cyber security, intellectual property protection, transparency, and government policies that require technology transfer or favor national companies will remain significant issues for both businesses and policy makers.

Bay Area companies, however, have demonstrated their capacity to succeed in China’s often challenging environment, and local government has chosen to lead as well. As the Economic Institute found in its 2006 report, as China grows as a major force in the world economy, the San Francisco Bay Area continues to occupy the pole position among its potential U.S. partners. Because of the scale of this opportunity, the relationship merits continued investment at both the public and private sector levels.