Remote Work in the Bay Area

In light of the drastic shift to remote work as a result of the COVID-19 pandemic, this report provides a foundational analysis of remote work eligibility in the Bay Area. It also seeks to begin understanding the economic, equity, and environmental considerations surrounding a potential sustained increase in remote work adoption in the region. The report was prepared in partnership with the Bay Area Regional Collaborative (BARC). This study is meant to provide an initial step in better understanding the population that could work remotely into the future.

In the San Francisco Bay Area, the pandemic has collided with California’s worst season for wildfires in its history. While the pandemic will eventually pass, climate change will continue to threaten the state—making solutions that limit greenhouse gas emissions paramount for the state’s and region’s future livability. With that backdrop, and the near overnight adoption of remote work by a large population of residents, remote work has once again emerged as a potentially important tool in reducing greenhouse gas emissions.

Planners and policymakers across the Bay Area are looking for ways to capture the potential environmental benefits of remote work while limiting its unintended consequences. In order to make sound decisions in policy and programs to support wider, long-term adoption of remote work, it is important to recognize the potential implications on local economies, public transit usage, and service jobs—with a social and racial equity lens across each of these areas. What is missing from this conversation is a deep understanding of the data around remote work eligible occupations. While no model can predict the future uptake of remote work and it is impossible to disentangle the impacts of remote work from impacts related to the pandemic, much can be gleaned from understanding the population that could work remotely into the future.

These numbers and the data presented do not represent the number of people working remotely today, or even those that have in the past or will in the future. Given that accessible data on work location is not real time, this analysis instead focuses on the occupations that could be completed remotely, offering an upper bound for potential remote work adoption. More importantly, this analysis seeks to use the available data to draw comparisons and highlight differences; it does not seek to definitively predict remote work uptake or frequency into the future. 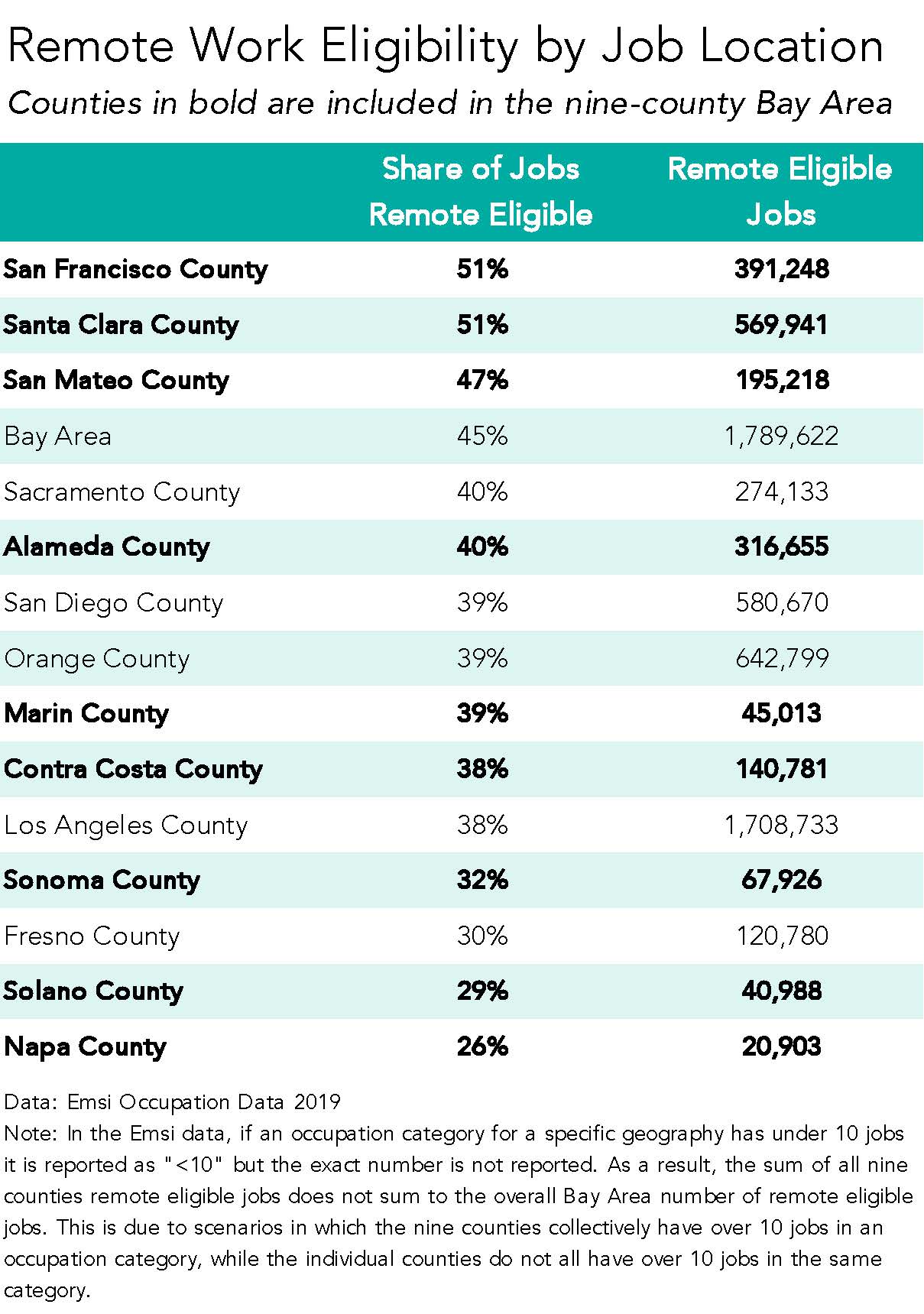 This analysis also outlines a number of different areas that should be considered if remote work becomes more prevalent over the next few decades—either via employee and business preference or by public policy.

If each of the region’s 1.79 million people employed in a remote eligible job worked outside of the office for just one day per week, over 1 million single-occupancy vehicle trips could be avoided each week—a reduction of 8% based on pre-COVID-19 travel. Reduced demand for commute trips will ease congestion for those that do travel, creating further emissions benefits. However, if households relocate to more dispersed locations in the region because they only need to be in the office a few days per week, more drivers could take to the roads for longer commutes between locations that are not currently connected by transit. In addition, if many households relocate to less transit and pedestrian-friendly locations, there could be a localized impact on the environment as people become more reliant on cars as a primary mode. Shifting travel behavior could also call for a re-prioritization of transportation investments away from commute trips to urban centers and toward local transit, bicycle, and pedestrian infrastructure.

The future of downtown districts

In San Francisco, the Financial District (67 percent of total jobs are eligible for remote work) and SOMA (61 percent) show high remote work concentrations. In contrast, smaller commercial districts such as Downtown Napa (25 percent) and Downtown Vallejo (24 percent) have a smaller share of total jobs within remote eligible occupations. The potential for remote work to drive down daytime populations in downtown areas can impact the service economy, housing markets, and public transit usage.

Equity and opportunity for remote work

Outmigration or shift in housing preferences

It is impossible to disaggregate remote work effects from COVID-19 effects, and this is especially true when it comes to housing markets. Median rents have fallen by at least 20 percent year-over-year as of October 2020 in San Francisco, Mountain View, and Cupertino—all locations with a high percentage of jobs that could be done remotely. These drops in rental prices in these locations indicate their susceptibility to population decline driven by increased remote work. If remote workers begin to prefer housing in suburban locations, remote work could also alleviate some of the pressure on urban housing markets while simultaneously shifting affordability concerns to other parts of the region.

Disruption to the service sector

Of the 55% of workers in the Bay Area who hold occupations that are not eligible for remote work, many would be described as service sector employees. In dense urban areas, the service sector is dependent on the daytime office worker population and its spending. Within the 12 urban locations analyzed in this report, there are a total of 265,000 non-remote eligible jobs and a large share of them are in occupations that are directly connected to the size of the area workforce. This suggests that many service sector jobs in commercial districts could be at risk if the loss in daytime population is sustained. Alternatively, these jobs could migrate to local nodes, thereby supporting greater jobs-housing balance in the region. However, the geography of jobs is difficult to predict going forward.

Among remote eligible workers in the Bay Area, 265,000 (or 15 percent of all remote eligible workers) take transit to work, while 1.1 million workers (or 62 percent) drive alone. The remaining 411,000 remote eligible workers commute via carpool, on bike, walking, or they already work from home. While remote work could eliminate a larger number of car trips, it could also reduce transit ridership. Trips to San Francisco could be particularly impacted, as almost half of the jobs in San Francisco that are remote eligible are filled by workers that take transit, equating to 183,000 daily transit riders. The top stations for morning exits for both BART (Montgomery Street and Embarcadero) and Caltrain (San Francisco, Palo Alto, and Mountain View) all are located in zip codes with high percentages of remote work eligible occupations.