Transportation systems are a critical component of a well-functioning economy. The ability to efficiently move both people and goods provides residents access to job opportunities and necessary services, and offers businesses a wider talent pool and larger customer base. States and regions that prioritize transportation infrastructure not only create pathways to improved economic competitiveness, strategic investments also have positive implications for equity and the environment. This report explains interconnected nature of the economy in Northern California Megaregion and examines the economic potential that a more efficient rail transit system could bring to the megaregion. The report examines how unlocking the transbay bottleneck with a new transbay rail crossing is an integral investment in building a connected rail network in the Northern California Megaregion and how that network would transform rail travel across the 21-county megaregion.

The Bay Area region and the State of California are rightly focused on the immediate health and economic recovery from the COVID-19 pandemic, but the pandemic has also created an opportunity to re-envision blueprints for future growth. Population growth has blurred the boundaries between the state’s metropolitan areas, particularly in Northern California. Housing markets are no longer local or even regional in nature, as exemplified by a growing wave of Bay Area migrants to Sacramento; and affordability challenges in urban areas have resulted in increasing commute times. Yet planning at a megaregional scale is difficult as governmental structures do not match the megaregion’s geography.

Transportation systems are one area where megaregional trends are most visible, and megaregional coordination on infrastructure planning is already taking place, particularly around passenger rail systems. Transportation creates the physical points of connectivity in the Northern California Megaregion, enabling commutes, business trips, and leisure travel—all of which are key to the success of the economy across the megaregion. In 2018, approximately 187,000 people were commuting into the nine-county Bay Area for work, a number that was rising each year; however, more than 95% of those commuters were driving.

If highways and rail lines are the circulatory system of the Northern California Megaregion, then the transbay corridor—connecting San Francisco and Oakland—is the critical artery for travel. Prior to the pandemic, Bay Bridge traffic during peak commute hours was at a standstill almost daily and BART riders through the transbay tube, the existing BART tunnel between West Oakland and downtown San Francisco, were experiencing crush loads—both pointing to a need for added travel capacity and resilience against system delays.

The potential for a new rail crossing to serve multiple markets and connect into the regional rail system means the project would have immense impacts within the transbay corridor and across the Northern California Megaregion. A new crossing becomes more than a capacity solution, it becomes a transformative investment for a broad population. New markets for rail travel will be opened—particularly trips between Sacramento / Northern San Joaquin Valley, San Francisco, and the Peninsula that are now completed via car or with long travel times and multiple transfers via rail and transit—and new opportunities for economic growth will be created. 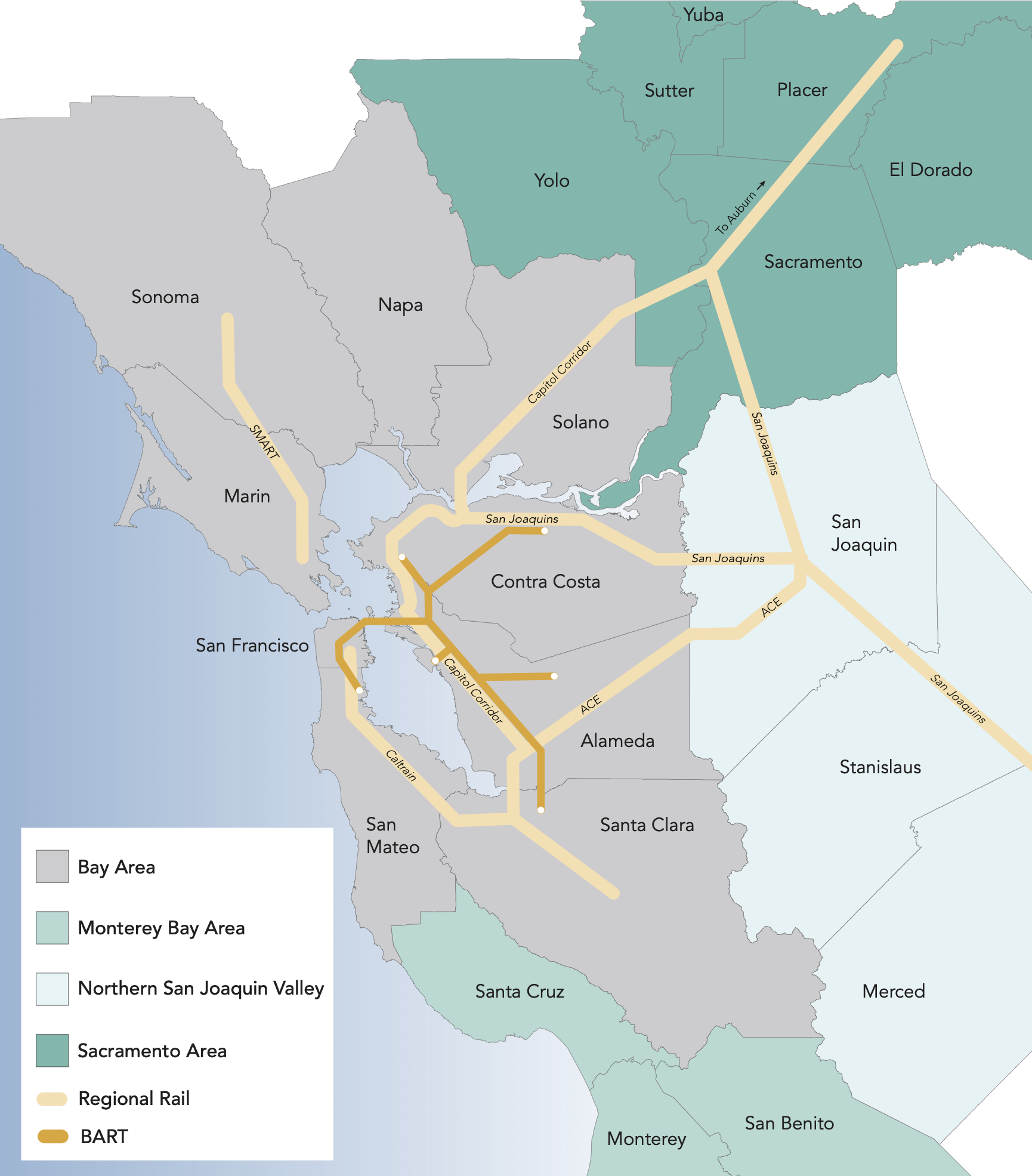 These trends have shaped usage of the megaregion’s transportation systems, as key gateways into the Bay Area region have seen sharp spikes in usage. Of note, the corridors with fast, frequent rail service, the transbay corridor (BART) and the I-101/I-280 corridor (Caltrain), have the highest transit shares among their users: 51% and 19%, respectively. No other key corridor in the megaregion has a transit mode share over 10%.

A new transbay rail crossing not only provides added capacity within the transbay corridor, it is a lynchpin project that unlocks the potential of numerous other rail improvements in the 21 counties of the Northern California Megaregion. Planners are calling this overarching program of passenger rail network improvements Link21, of which a key project is a new transbay rail crossing between San Francisco and Oakland. With new access to the San Francisco and Peninsula markets, planned infrastructure improvements for regional rail will form a megaregional rail network that can serve customer needs across the Bay Area, Sacramento, and the Northern San Joaquin Valley and provide a much greater percentage of total trips in the Northern California Megaregion. Without a new transbay rail crossing, some of these new rail investments will only serve to add to the transbay corridor bottleneck. 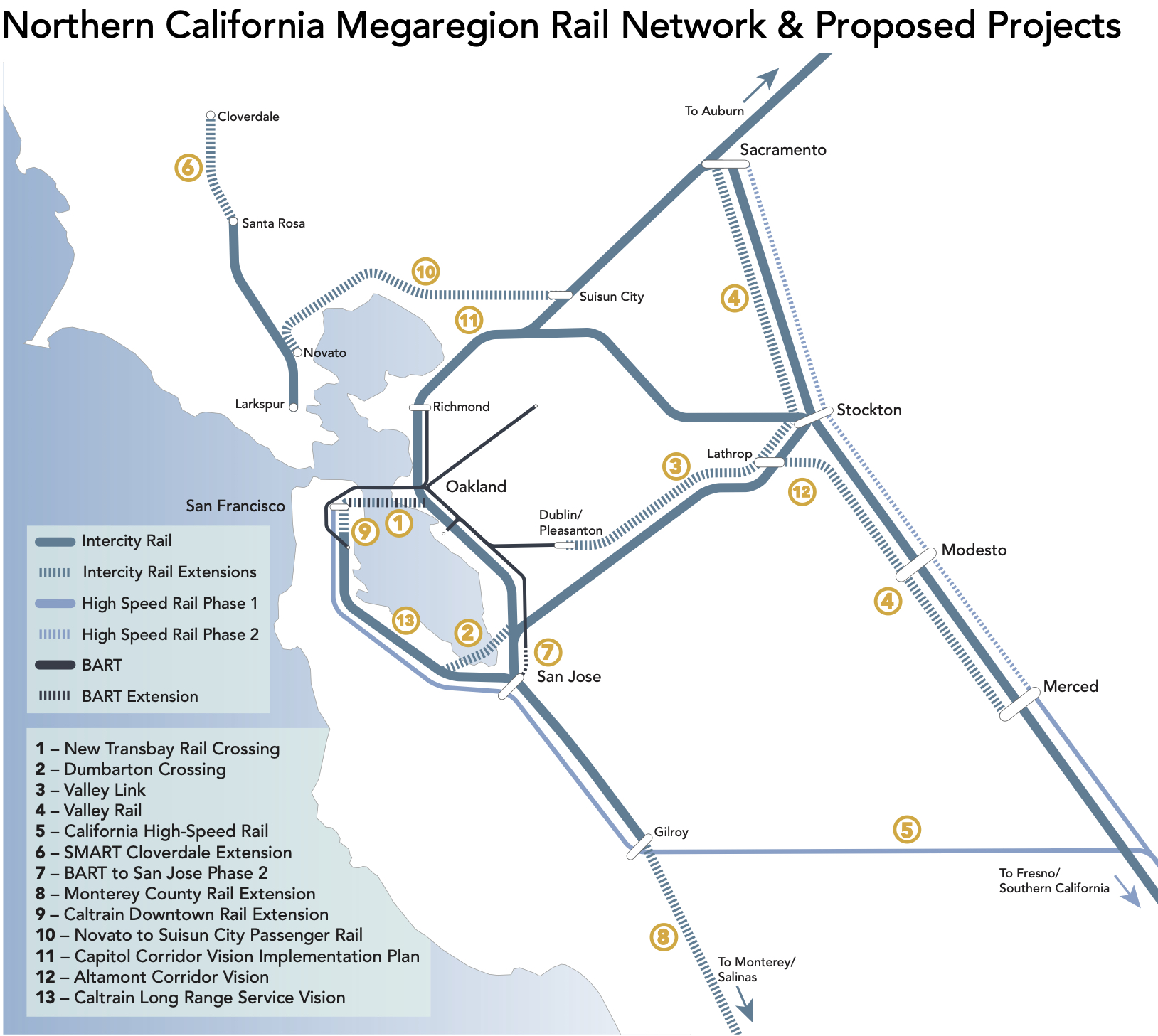 Reducing Travel Times Across the Megaregion

A new transbay rail crossing between Oakland and San Francisco has the potential to reduce travel times for all populations traveling between and within the San Francisco Bay Area, Sacramento Area, Northern San Joaquin Valley, and the Monterey Area if implemented in coordination with other megaregional rail projects.

More Destinations within One Hour by Rail: Link21 will make more destinations accessible via the current rail network and encourage and enable more people to choose rail for different purposes, including those who are transit dependent. Access to more jobs, educational institutions, health care centers, and entertainment within an hour will make travel by rail a viable option on any day of the week for business, school, or leisure trips. While the details of a new transbay rail crossing and how it connects to BART and other regional rail networks will determine future transit travel times, an easier trip will create more demand for the service—at the very least moving trips to transit that would have otherwise been completed with a car. Other trips could also become more viable via transit if onerous transfers are eliminated.

Direct Access and One-seat Rides: A new rail crossing in the transbay corridor could enable one-seat rides between some major destinations in the megaregion that currently lack a direct rail connection. The Link21 program will look at different ways to improve the passenger experience by serving high-demand weekday and weekend destinations. Since megaregional travelers traverse long distances through traffic-congested corridors, reducing travel times by rail is critical for moving people more efficiently.

Mode Shift Also Benefits Highway Trips: With a new transbay rail crossing creating capacity, increasing reliability, and inducing demand within the rail transit network, travel time benefits can also accrue to users of the highway system. By replacing car trips with rail transit trips, highway congestion could be eased for goods movement or those commuters without a transit option.

As alternative investment plans are developed for the Link21 program, planners will evaluate the benefits of capital and operational improvements to offer a better travel experience for passengers.

Service Reliability: Investments in the Link21 program will improve service reliability so that trains run on time and can more easily recover from unexpected delays. Train on-time performance could greatly improve for regional rail trips, especially where passenger rail must share tracks with freight trains. Constructing passing tracks or alternate routes around congested bottlenecks in the system provides a backstop for BART and regional rail if there are equipment, service, or medical issues that cause train delays.

Extended Service Hours: A new transbay rail crossing and associated improvements could allow extended service hours in the rail network. Extended service hours (early-bird / late-night) would serve people who commute outside typical work hours, especially essential workers and those in the construction, hospitality, and air transportation industries. Implementation of such service will be determined as the program advances.

COVID-19 has made clear the economic divisions present in the Northern California Megaregion, as inland regions more reliant on service industries struggle with high unemployment while coastal areas, and the tech economy in particular, are relatively less impacted. By tying together once-disparate regions, Link21 can provide a more equitable trajectory for long-term economic growth across the megaregion.

Easier Commutes: A new transbay rail crossing and a robust megaregional rail network can increase the viability of rail travel for commutes. Riding transit can be easier to navigate, more predictable, and allow for productivity while traveling.

Increased Access to Jobs: A new transbay rail crossing can link affordable housing with higher paying jobs and enable increased rail transit service to more jobs and destinations overall. In 2018, 79% of the megaregion’s jobs in Professional and Business Services were located in the Bay Area, while 92% of jobs in the Information sector were located there. These are the two most geographically imbalanced employment sectors in the megaregion, and they are also the providers of some of the highest-wage jobs. With the concentration of high-paying jobs in the megaregion’s core of San Francisco and Silicon Valley, facilitating commutes from locales with more affordable housing will become even more important for economic opportunity.

Expanded Choices: The Link21 program enables greater reach and frequency of public transportation between markets, thus expanding the options people have in locating their homes and where employers locate their businesses. Efficient rail systems can make the Northern California Megaregion more competitive against peer U.S. metropolitan regions and global megaregions, as shorter travel times mean companies can recruit over a larger geographic area and access a larger talent pool. Additionally, companies with multiple offices or clients spread across the megaregion can benefit from faster trips between more rail-connected destinations.

With vehicle miles traveled rising in key corridors, projects that make transit more attractive will be paramount in meeting the state’s environmental goals.

Reduced GHG Emissions: The largest single contributor to greenhouse gas (GHG) emissions in California is the transportation sector, making up 40% of all GHG emissions in 2017. An improved megaregional rail network can shift more people from single-occupancy vehicle travel to a greener transportation mode. Even as cars become greener, there are additional benefits related to traffic congestion relief that can be achieved by reducing car travel. The new transbay rail crossing was found by the Metropolitan Transportation Commission to be the single most cost-effective transit expansion program to reduce GHG emissions and vehicle miles traveled in the Bay Area.