Matilija Dam, constructed by Ventura County in 1947 on Matilija Creek near Ojai, California, no longer functions as intended. Sediment has filled the reservoir, eliminating water storage while starving the Ventura River ecosystem of replenishing sands and cobbles. Over multiple decades, the County, stakeholders, and a host of funding partners have built significant momentum around removing the dam, with the goal of restoring access to upstream habitat for the endangered steelhead trout and completing necessary infrastructure improvements to protect downstream communities from future flood risks. While these attributes of the Matilija Dam Ecosystem Restoration Project are well documented, this report seeks to provide a greater understanding of the job and economic benefits associated with the comprehensive dam removal effort.

The Matilija Dam Ecosystem Restoration Project (“Project”) is a collaboration of the Ventura County Public Works Agency – Watershed Protection (“County”), local stakeholders, and funding partners to improve water and climate resilience in California’s Ventura River watershed. Removing the obsolete Matilija Dam and improving associated watershed infrastructure will benefit residents and visitors who depend on the river for flood protection, water supplies, river crossings, and recreation. These investments will also restore and sustain the native wildlife and ecosystems of the Ventura River from headwaters to estuary.

Significant economic benefits are also associated with the Project. The estimated $165 million to be spent across the suite of project components will catalyze job creation and stimulate the local, regional, and statewide economy. The chart below outlines the economic impact of the Project for the local Ventura County economy, the seven-county Southern California regional economy, and the statewide economy. 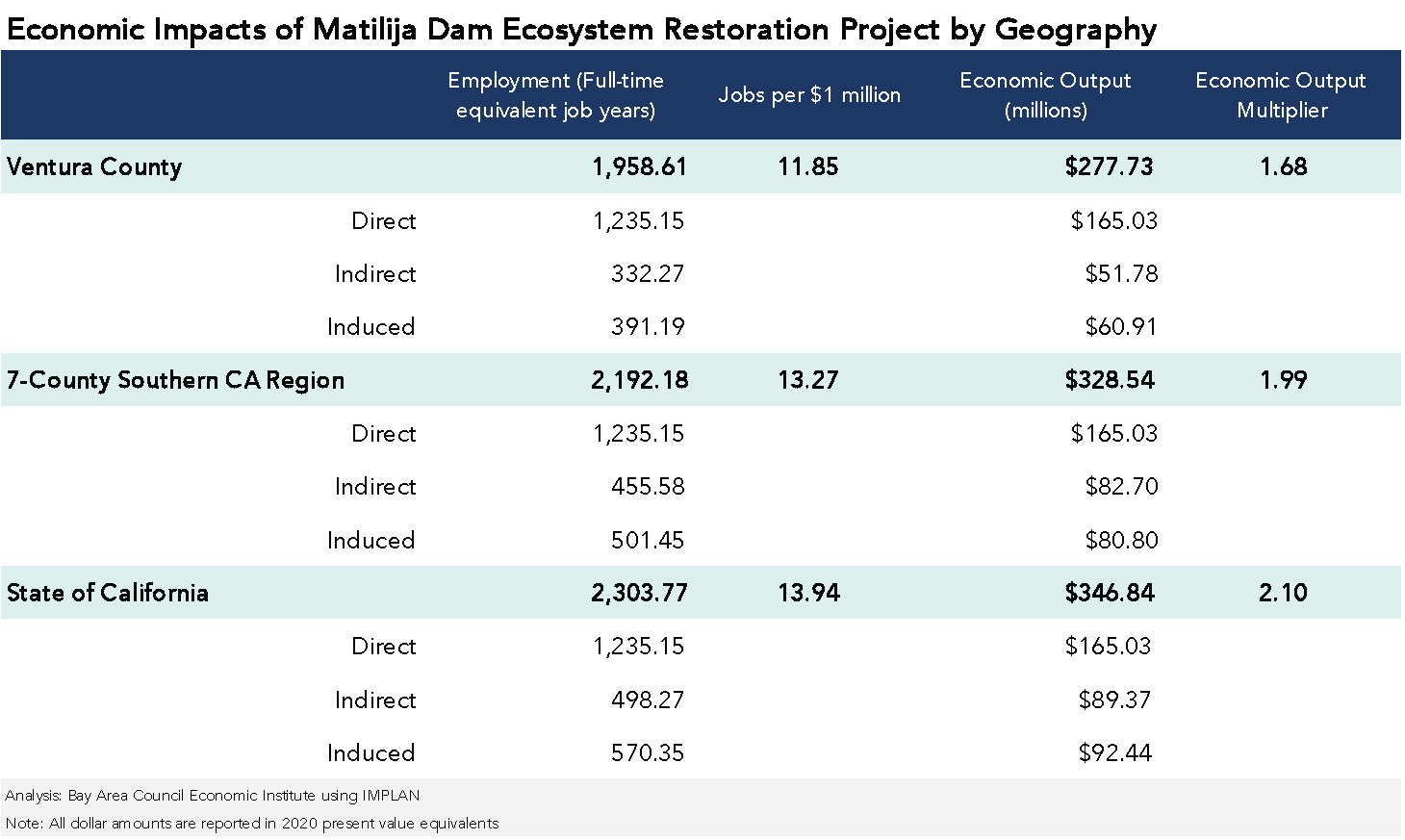 Due to the scale of the Project, this analysis includes investments that prepare the downstream infrastructure for the removal of the dam and the deconstruction of Matilija Dam itself. In addition to the dam removal, the infrastructure components include two bridge reconstructions, three levee projects, and a number of water diversion system improvements. A project map in Appendix A provides additional information, as does the section on Project Impact Detail.

For this analysis, it is assumed all essential downstream components and dam removal will be designed, funded, and implemented during the 10-year period, 2020 to 2029. Post-construction monitoring, habitat restoration, recreation enhancements, adaptive management, and project management will continue for another five to 10 years, ending by 2040.

In total, the $165 million invested in the entire Matilija Dam Ecosystem Restoration Project results in the impacts depicted on the previous page across the three different geographies over the 20-year project timeline. Key results of the analysis include the following:

The chart above also shows the two key economic impacts studied here: employment (in full-time equivalent job-years) and economic output (or the total value of all transactions associated with the initial spending). The results show three impact categories, which are also explained further in the Methods section of this analysis:

The economic output multiplier indicates the total value of transactions that are generated as a result of one dollar of initial expenditure. The multiplier effect grows as the geography studied gets larger—this pattern is typical as larger geographies have less spending leakage to other surrounding areas. As a state with a diverse set of industries and a large labor pool, the California model has very limited immediate leakage to other states. The model assumes that all of the Project’s initial capital and labor inputs come from within California. The project team confirmed that all existing project contracts are with firms headquartered in-state, and that the vast majority of future contracts will also be California-based.

The major difference in the employment estimates across all three geographical models is related to induced impact. This is the result of the impact that project-related wages will have on local economies across the state—even those outside of the immediate project area. For example, labor income spent in the retail, healthcare, or tourism industries in surrounding counties as a result of increased wages from the Project stimulates those local economies via an induced impact. The statewide model has a higher number of jobs supported because it incorporates these indirect and induced impacts not just for the design and construction workers employed in Ventura County—likely living in the Southern California region where the Project is taking place—but also the earnings of all contractors in cities across the state such as Oakland, Rancho Cordova, and Folsom.

The impacts on the statewide economy for each project component, including pre-construction and post-construction spending, project management, and major infrastructure projects, are shown in the table above. The chart at the bottom of the page shows that the majority of the jobs in California are created in the first 10 years of the Project. This reflects the timelines of the infrastructure components that encompass the greatest amounts of spending. The last 10 years of the Project support a more consistent level of employment, reflecting the timelines of spending associated with various post-construction elements (monitoring, continued project management, etc.). 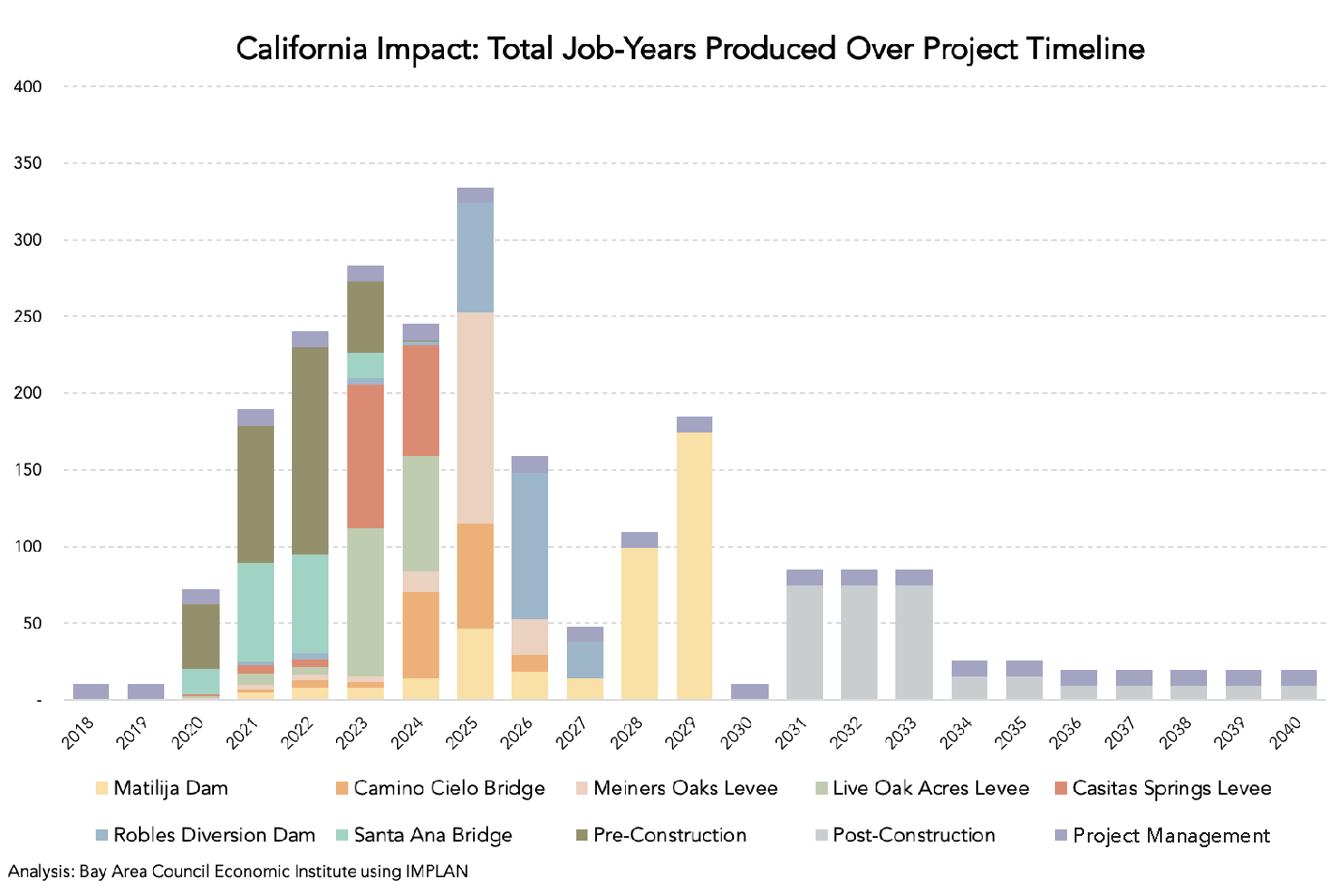 Read the Full Report
Download the Summary
Get Email Updates