Economic Profile 2020: The Impact of COVID-19 on the Regional Labor Force

How has the pandemic disrupted labor force participation in the region?

Prior to the COVID-19 pandemic, the Bay Area had one of the lowest unemployment rates in the nation—an indicator often cited to convey the region’s strong economy. While less commonly referenced, the labor force participation rate—the percentage of the civilian population age 16 and older that are either employed or looking for work—has taken on added importance given the job dislocations that the pandemic has caused.

Looking backward, the Bay Area regionwide labor force participation rate hovered between 65 percent and 70 percent between 2000 and 2018. Over this period, the Bay Area’s labor force participation was lower than peer metros such as Seattle, Boston, Austin, and Denver, but higher than New York, Los Angeles, and San Diego. The difference can largely be attributed to demographics.

Labor force participation rate is also an important indicator for regional economic recovery, as it provides greater nuance to reported unemployment rates. It can also be a reflection of migration during the pandemic. The chart below shows labor force changes by metro area across the U.S. Movement can partially be attributed to people dropping out of the labor force in each of these regions, but it may also be an early sign of population shifts particularly given that the areas with labor force increases are also the same regions where rents are increasing during the pandemic.

Since October 2019, the Bay Area labor force has fallen by more than 56,000 people. While not as steep of a drop as in New York, Chicago, Boston, and Los Angeles, the region’s labor force loss does point to a combination of slow economic recovery—which has pushed those that have lost their jobs to not seek work—and potential population decline. Looking within the Bay Area, much of the labor force reduction can be attributed to Alameda, Contra Costa, Marin, San Francisco, and San Mateo counties, whereas Santa Clara County has actually grown its labor force year-over-year. 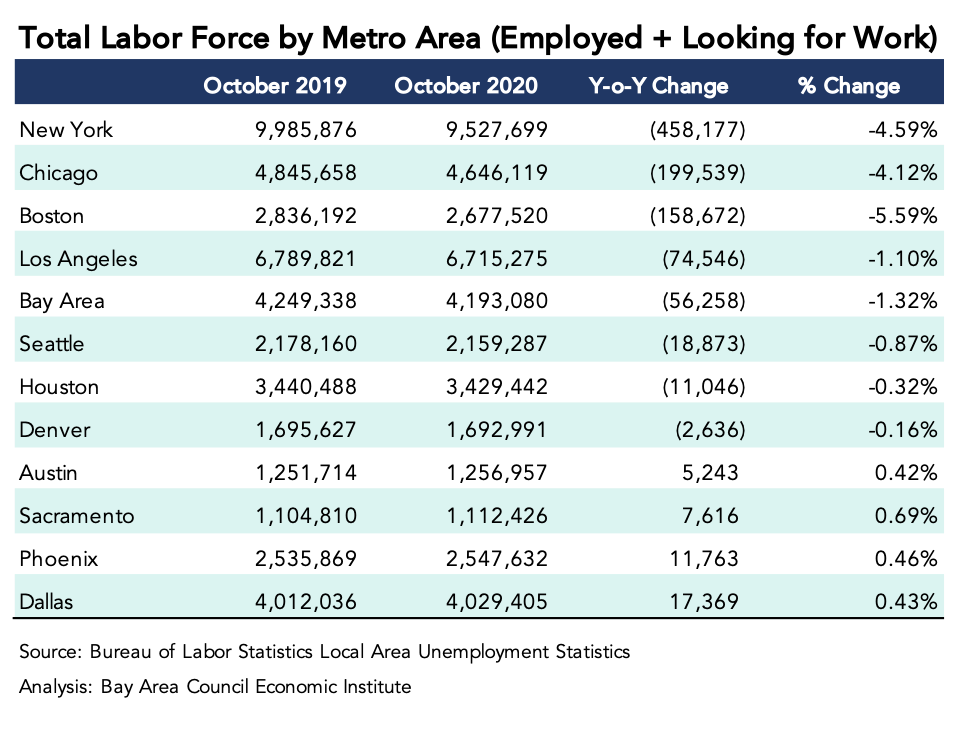 On a national scale, woman made up 46 percent of the workforce before COVID-19 but have accounted for 54 percent of the unemployment claims during the pandemic. Furthermore, women are disproportionately represented in industries that are expected to be negatively impacted by COVID-19 in the long term.

Aside from labor market dynamics, another major factor influencing women to drop out of the workforce is the increased burden of domestic and unpaid care work. Research has found that the pandemic has created additional unpaid and domestic work among households, and that the gender distribution of this additional work has remained similar to pre-pandemic: women take on more of the work.

Fifty-five percent of women and 64 percent of men reported an increase in overall unpaid care and domestic work as a result of COVID-19—a discrepancy likely due to women already spending more time per day on this type of work prior to the pandemic. However, respondents of both genders were more likely to indicate that unpaid care and domestic work during COVID-19 is done mostly or 100 percent by women than to indicate the same about men.

Exhibit #2: The lowest wage industries in the Bay Area have experienced the deepest and most sustained job loss

The industries that have sustained the highest levels of net job loss in the Bay Area as a result of the COVID-19 pandemic are predominantly industries with the lowest average wages. Accounting for over one-third of the net jobs lost in the region, accommodation and food services is also the industry with the lowest average weekly wage in 2019. With the job losses concentrated in these low-wage industries, there is an opportunity to invest in retraining the inactive workforce with skills that help direct these previously low-wage workers into higher wage career trajectories as they return to the workforce. 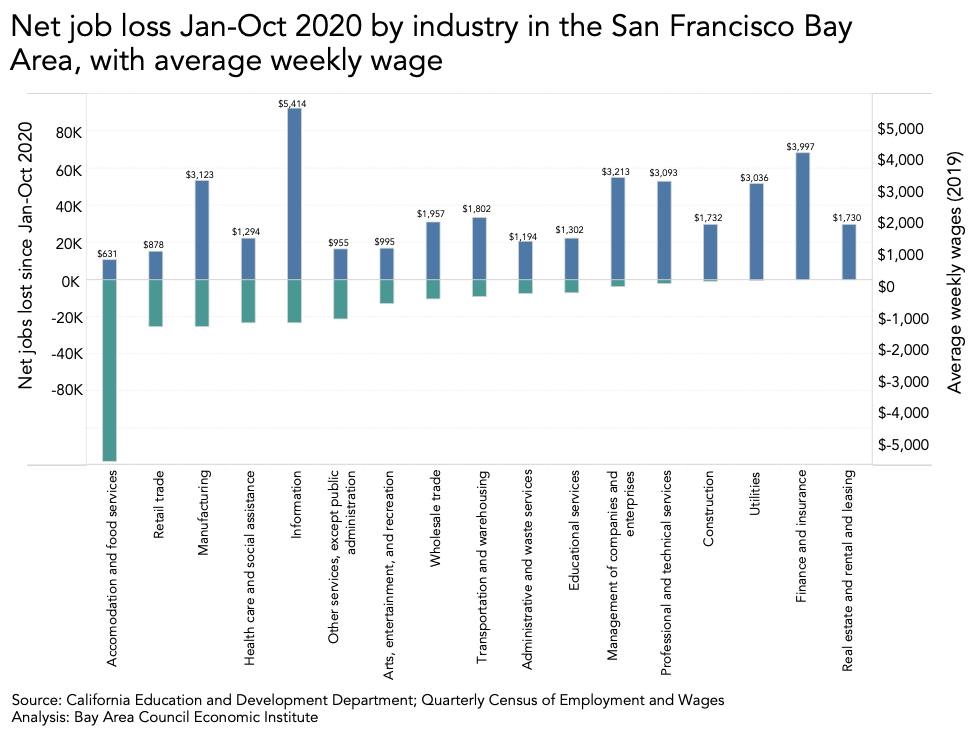 Building upon the skills that workers previously employed in these lower wage industries would position many Bay Area residents for higher-wage, more resilient, and in-demand jobs in the post pandemic economy. Research on in-demand jobs that are resilient in the short term, to the pandemic, and in the long term, to factors such as automation, has found that the most resilient jobs are concentrated in technology, healthcare, and business management. An analysis conducted prior to the pandemic found that nationally only 11 percent of the job postings in those three categories did not require a bachelor’s degree, significantly limiting the pool of qualified candidates. Simultaneously shifting the mind sets of hiring managers to take a skilled-centered view of candidates and building opportunities for those who have either left the labor force or are unemployed as a result of the pandemic to build new relevant skills would provide a pathway to higher wage employment for many currently excluded from the regional economy’s most resilient jobs.

This approach would also offer employers an opportunity to improve diverse representation in their workforce due to the higher concentration of women, Black, and Latinx workers in or previously in industries that have experienced the highest job losses. 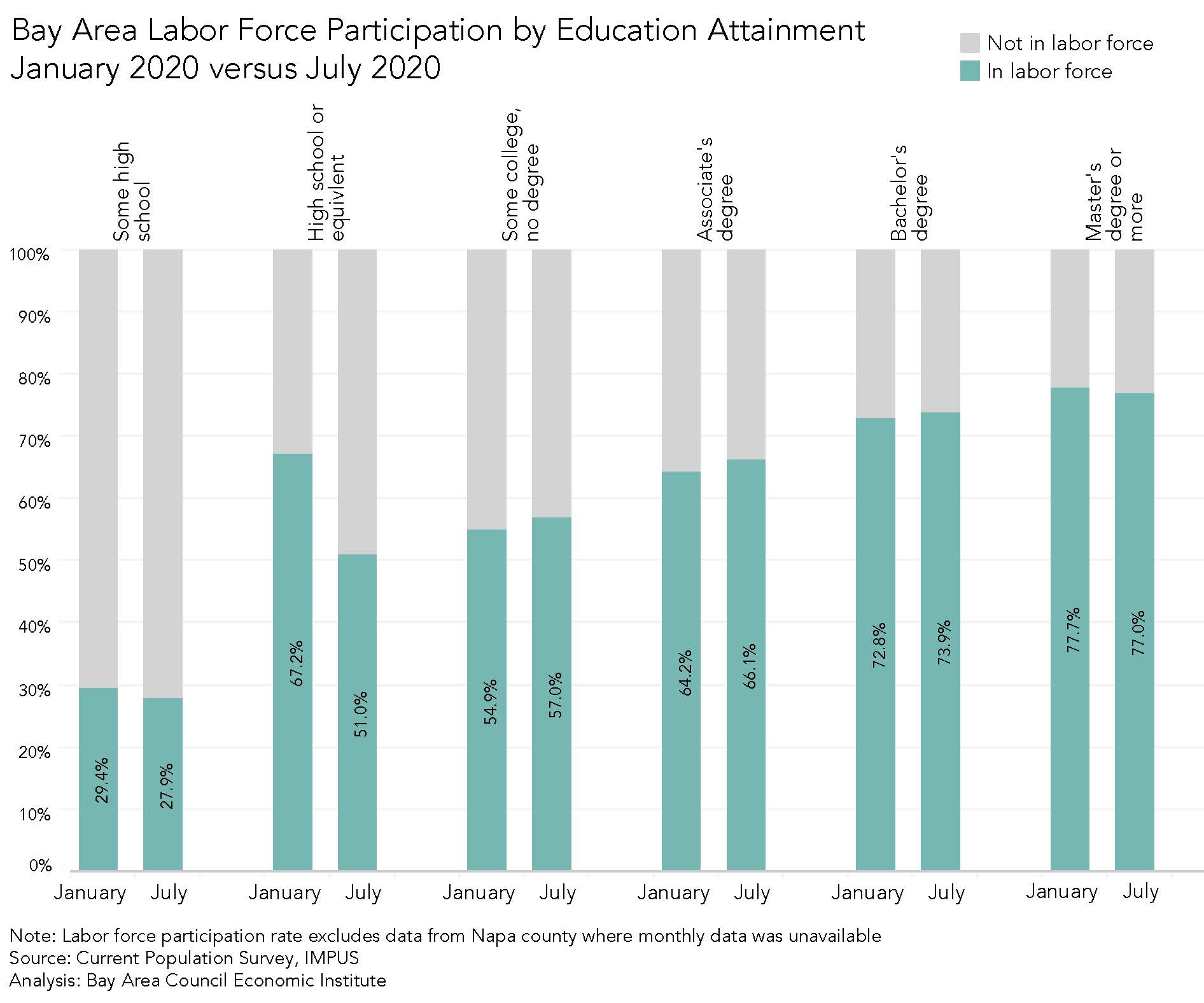 This dynamic is likely driven by the concentration of employment for those without a college degree in industries impacted most deeply by the pandemic. Another factor at play could be the relationship between the ability to telework from home during that pandemic and education level. At the national level, 10 percent of those employed with a high school degree but no college were able to work from home as of July 2020. The share with the ability to work from home rises to 19 percent among those with some college or an associate’s degree and to 47 percent among those with a bachelor’s degree or higher. The inability to work remotely for many with lower education attainment is another factor likely driving people from the workforce due the increased health risk now associated with maintaining onsite jobs.

The Bay Area’s labor force rates as compared to peer metros will be an important indicator as the region tracks recovery from the COVID-19 economic downturn. The groups that are not seeking work or possibly leaving the region in the coming months will shape what the regional workforce looks like in the wake of the pandemic. Understanding not just the sheer number, but the demographics that are falling out of the labor force over the course of the region’s economic recovery will indicate the equitability of the region’s employment recovery.