Economic Profile 2020: The Future of the Bay Area’s Innovation Ecosystem

How will COVID-19 shape the future of the Bay Area’s innovation ecosystem?

The Bay Area is renowned globally for its strong presence of technology giants, successful startups, and unmatched ability to capture venture capital investment. These factors have largely influenced and driven the Bay Area’s economic growth over the last decade, exemplified by its rapid GDP growth. Between 2015 and 2018, the Bay Area experienced a 5.9% compound annual growth rate in GDP – one of the highest growth rates among national economies, outpacing that of its peer U.S. cities. Home to many of the largest companies in the country based on market capitalization, the Bay Area’s innovation ecosystem has attracted talent from across the globe, heightening the region’s role as a global leader in innovation and entrepreneurship.

Venture capital, which has a larger share of investment in the Bay Area than any other region in the U.S., has served as the catalyst for the region’s strength in technology and the growth of startups. Venture capital investment is an indicator of a region’s financial and tech prowess, which in turn strongly influences its economic status at both a domestic and global level. Historically, the Bay Area’s highly educated population has led to the growth of successful companies and spurred investment in others across the region.

Exhibit #2: The Bay Area has more top-performing companies, particularly in the technology industry, than most major metropolitan areas.

Additionally, despite the current economic environment, several companies have announced initial public offerings this year. Of the 18 that have announced IPOs since October, seven are headquartered in the Bay Area. 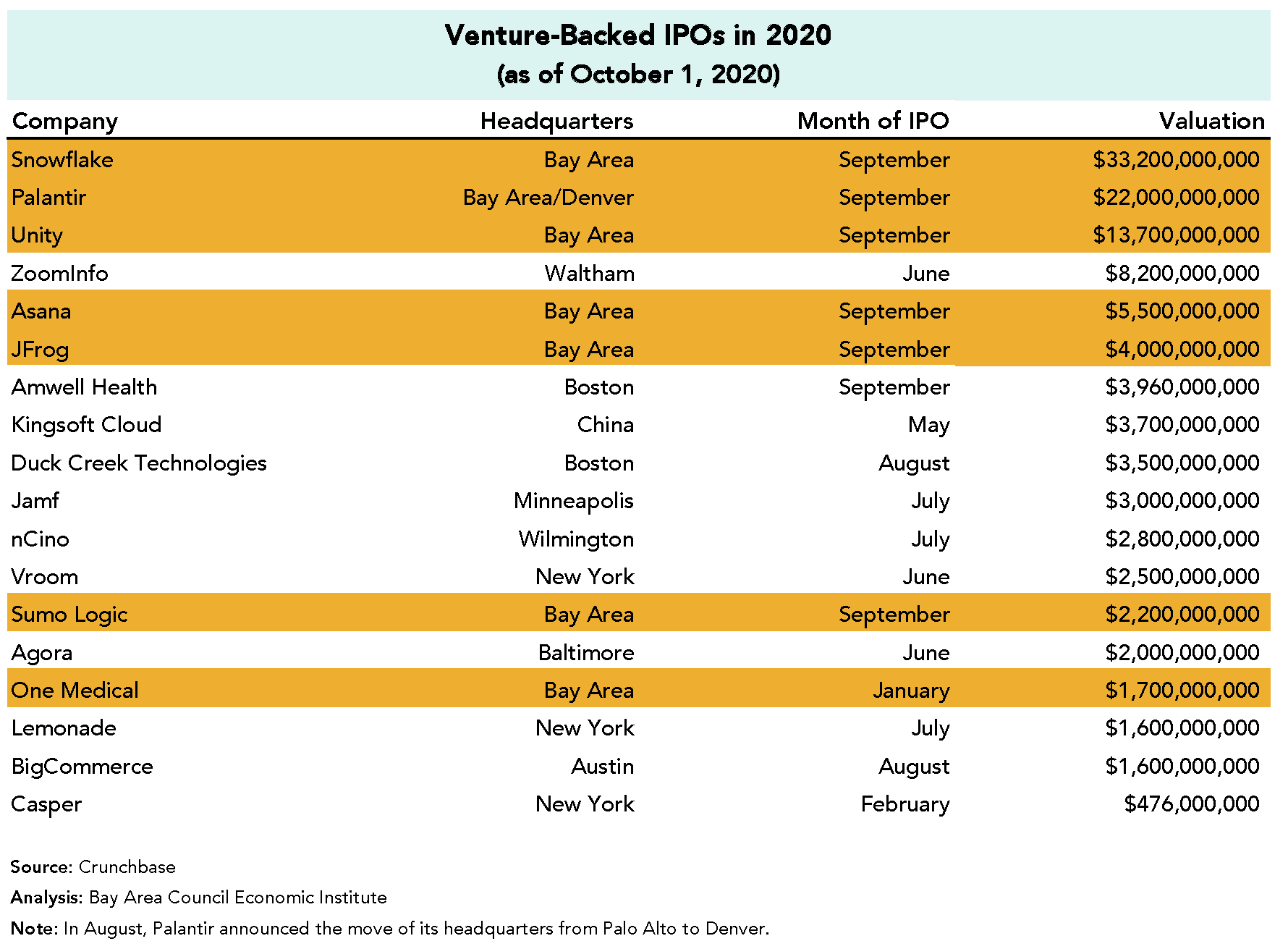 The Bay Area’s innovation environment in general exceeds that of many peer cities across the U.S. The region has a concentration of technology companies, but the region’s top performing companies remain more industry diverse than its peer regions. As of 2020, the Bay Area had 39 Fortune 500 companies in the U.S., only second to New York at 44 companies. The Bay Area’s share of Fortune 500 companies by market capitalization is largely found in the technology industry, while more than half of New York’s share is found in the Financials industry (56%) and Chicago’s share is largely found in the Industrials (39%) and Consumer Discretionary (32%) industries. 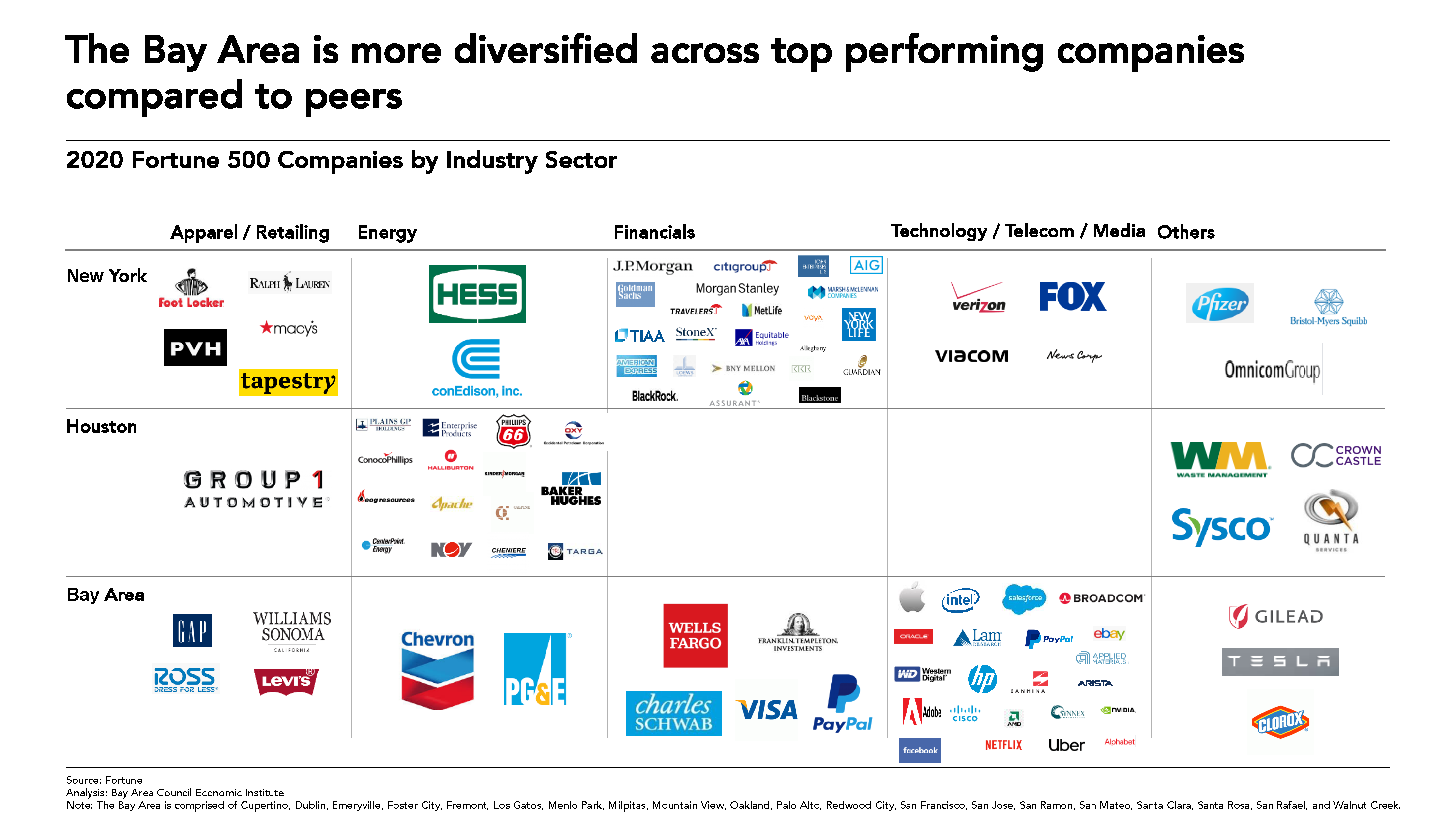 Exhibit #3: The demographic representation of employees in the venture capital and technology industries is still skewed toward white individuals.

While the dominance of the Bay Area’s venture capital investment and technology presence is impressive, the racial and ethnic breakdown of these industries are imbalanced. Many tech companies lack diversity among employees, especially in leadership and technical roles, and this lack of diversity has shaped which businesses and companies receive investment and ultimately succeed in the region.

According to a 2018 Deloitte survey of venture capital firm and startup employees, over 75% of respondents were white, compared to 17% Asian/Pacific Islander and 4% Black.

Other sources have found that only 1% of VC-funded startups are Black, and only 8% are women.

According to the most recent diversity reports of some major technology companies in the region, between 51% and 74% of the global workforce is male, and the majority of the U.S. workforce is either white or Asian.

Increasing diversity in these industries can help advance economic equity for historically underrepresented groups that have not been able to break ground as company founders or as employees in technology and innovation roles.

In an effort to diversify the industry, nonprofits such as Transparent Collective are working to give underrepresented founders more exposure in the venture capital industry, connecting Black, Latinx, and female founders with entrepreneurs and providing valuable resources like fundraising preparation workshops. Likewise, technology companies, such as those represented in the charts above, have begun providing transparency around their workforce demographics through annual diversity reports and exemplifying a larger focus on diversity in their recruitment processes.

Exhibit #4: How will COVID-19 affect the future of VC investment in the Bay Area?

Since the beginning of the COVID-19 pandemic and 2020 recession, venture capital investment has certainly slowed when comparing the number of deals that were made in 2019 to deals made thus far in 2020. According to Crunchbase, the number of deals made in the seed to Series B stages declined by 44% when comparing the March-June 2019 period to the March-June 2020 period. Seed-stage deals were most impacted, shrinking by 57% during this time period, and Series B tech funding (particularly for travel tech companies) got hit the hardest for Series B deals. According to PwC/CB Insights’ MoneyTree Report for Q2 of 2020, year to date funding declined by 7% compared to the first quarter of 2019. However, between Q1 and Q2 of 2020, deal activity for US-based VC companies rose by 3%, indicating that deal activity could rebound in the coming months.

As for jobs more generally, the Professional & Business Services and Information industries, which encompasses technology jobs, have remained more resistant compared to other industries in the region. For example, for the Professional & Business Services industry, the industry had its largest loss of jobs in April – a 7% loss of the jobs it had in January, but by August, had recovered 97% of those jobs. Conversely, the Leisure & Hospitality industry saw a 50% loss in jobs it had in January, and by August, had only recovered 74%.