Economic Profile 2020: The Evolution of the Bay Area Higher Education System in the Wake of COVID-19

With 49% of the population over the age of 25 holding a bachelor’s degree, the Bay Area has one of the most highly education populations in the nation. This level of educational attainment is matched only by Boston (also 49%) and is well above the 33% national average. The region is also home to several institutions making impressive research investments. UC San Francisco (3), Stanford (10), and UC Berkeley (26), all rank within the top institutions nationwide in terms of expenditure on science and technology R&D. Additionally, MBA and undergraduate degree holders from Stanford and UC Berkeley have started impressive numbers of companies backed by significant venture capital. According to an analysis of Pitchbook by McKinsey & Company, between 2009 and 2017 Stanford and UC Berkeley graduates started a total of 2,948 companies. The region also has five different California State University campuses and an array of community colleges. 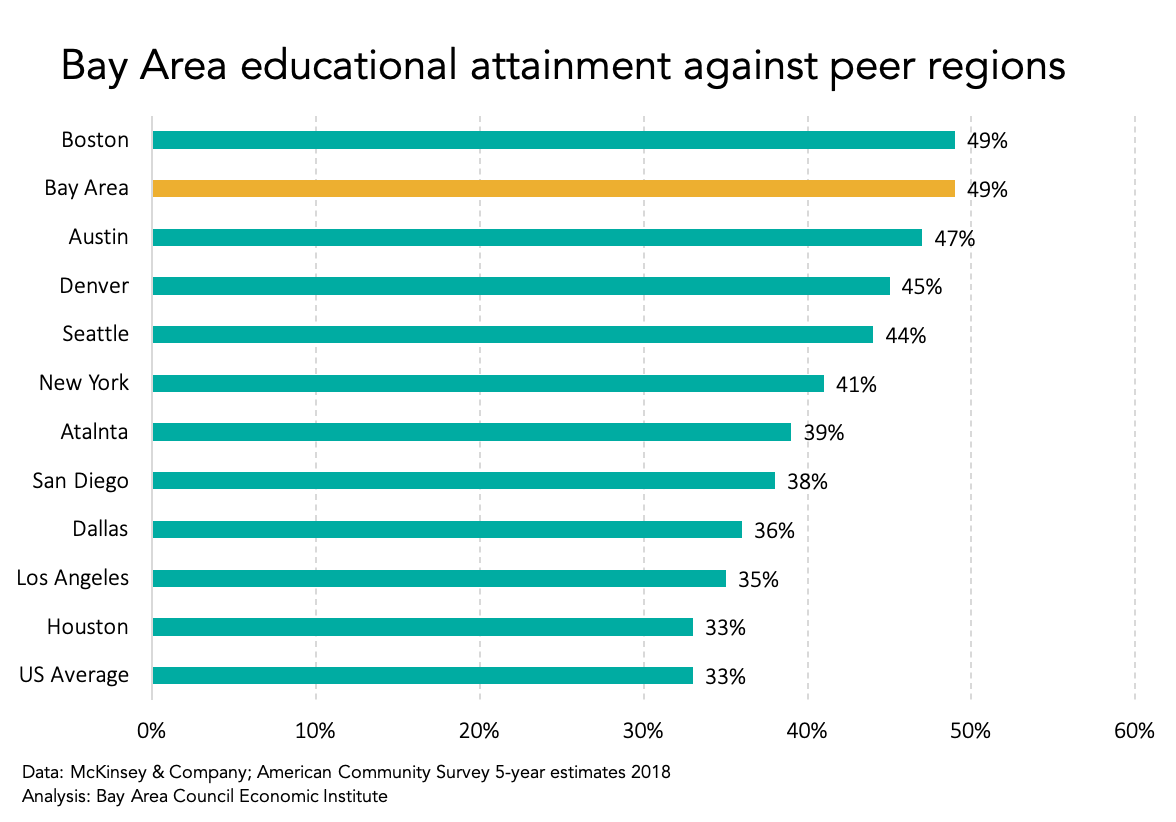 As these institutions grapple with the impacts of COVID-19, their future trajectories remain at least partially unknown. Revenue concerns driven by uncertain levels of enrollment, the possibility of partial or full remote teaching, and changes in first-choice school preferences among incoming students are all variables that could reshape higher education in the Bay Area in the wake of the virus.

Exhibit #1: Can the Bay Area make progress on racial disparities in educational attainment?

Admissions: While progress has been made in recent years, the UC admissions rate for Black applicants in 2016 was still only 47% compared to 62% among white applicants. 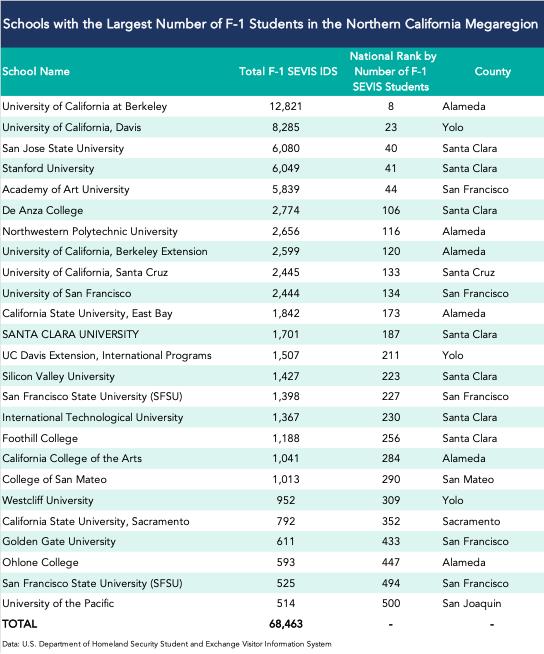 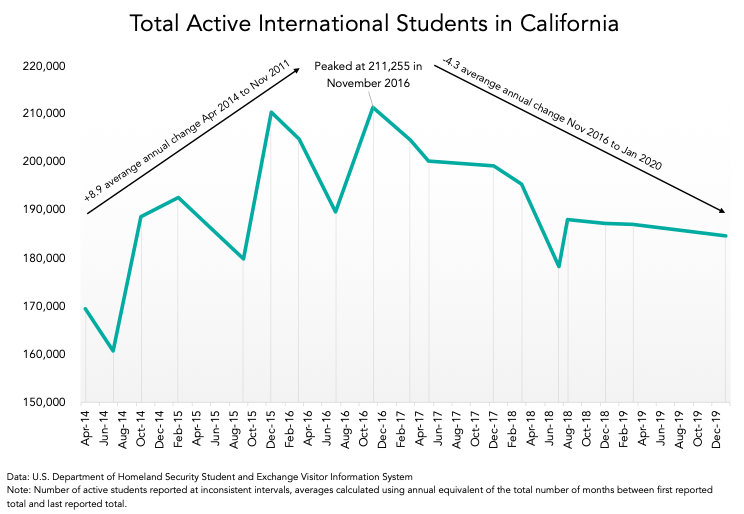 Exhibit #3: How will university R&D investments shift in the wake of COVID-19?

The university systems of the region are also major contributors to research and development (R&D), particularly in the life sciences. While certain life sciences R&D labs are kicking into overdrive with the vital goal of developing a vaccine or treatment for COVID-19, other subsections of the field and non-life sciences R&D fields face challenges in continuing their course amidst the implications of the virus. Surveys have shown that R&D organizations estimate productivity has fallen between 25 and 75 percent due to remote work, likely a factor of operating capacity being reported as 50 percent below normal.

Reduced operating capacity, supply chain disruptions, and laboratory shutdowns all have implications on the short-term productivity of product development, engineering, clinical trials, and more. Uncertainty around future market and customer demands further impact the ability of R&D organizations to prioritize programs and resourcing. 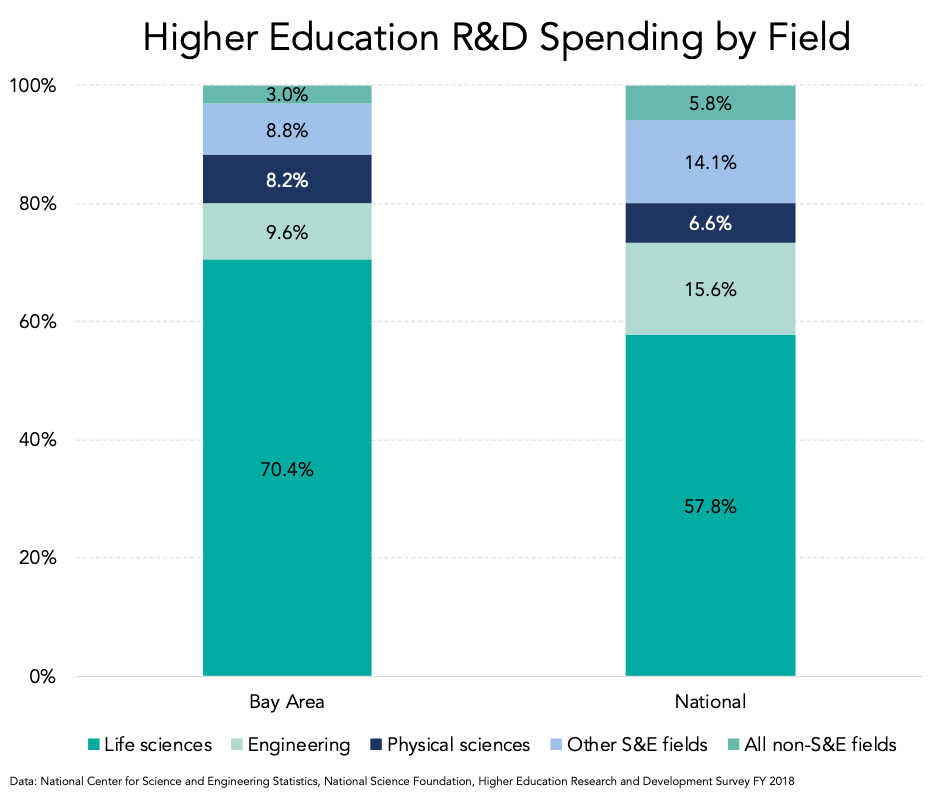 Compared to the breakdown of higher education R&D spending by field at the national level, the Bay Area has an over representation of spending in the life sciences field, with two-thirds of higher education R&D spending concentrated in life sciences as of fiscal year 2018. This concentration in life science R&D is a clear strength for the region, and it can be linked to the rapidly growing biotech industry in the Bay Area. With much of this R&D funding coming from state and federal grant programs, constrained public sector budgets in the wake of the pandemic could hamper spending levels going forward.

As the region begins to recover from the economic fallout of the pandemic, ensuring the strength of the Bay Area’s higher education institutions and maintaining the comparatively high level of educational attainment in the region are both integral inputs needed to protect the long-term vigor of the regional economy. As such, keeping an eye to factors such as equity in educational attainment, barriers to international enrollment, and changes in R&D spending is important during this period of recovery.