China's Technology Future and What It Means for Silicon Valley

The shift in China’s economy from low-end manufacturing to the production of increasingly sophisticated goods and services raises a far-reaching question: Is China innovative? Since innovation is widely viewed as being critical to technological competitiveness, the answer has important implications for Silicon Valley and other US technology companies. Its significance extends not just to trade but to investment as well, as US companies continue to invest in China, and Chinese technology companies increasingly invest in the Bay Area and California.

Innovation refers to the ability to produce new economic value through the creation or improvement of products or business services. It can take many forms. At one end of the spectrum is transformational innovation—something that fundamentally alters a market or an industry. Often, but not always, it is based on scientific research. But innovation can also be incremental—a modification or enhancement to an existing product or service that improves its market position and increases its economic value.

This report was prepared by Sean Randolph, Senior Director at the Bay Area Council Economic Institute. Alice Bishop, Research Analyst at the Economic Institute, and Sebastian Hamirani, an intern from California Polytechnic State University–San Luis Obispo, contributed to the research. The Economic Institute wishes to thank the sponsors of this project, whose support enabled its development: Lead Sponsors HSBC and Microsoft; and Supporting Sponsors Deloitte and Silicon Valley Bank. We also wish to thank the advisers for this report, who provided early guidance and reviewed its working draft, and also the many contributors who provided information and insight. They are listed in the Appendix.

China has advanced far beyond the mere copying of Western products or technologies and now excels at incremental innovation. It still lags the US, Europe, and Japan in transformational, science-based innovation, but with a sustained policy focus and investment by its government and the leverage provided by a massive domestic market, transformational innovation can also be expected to advance.

Government investment in scientific research is growing, as is the volume and quality of Chinese generated patents and articles published by Chinese authors in scientific journals. China is still playing catch-up when it comes to engineering, but quality is improving there as well. It can also devote large numbers of engineers to achieving its objectives. China also draws significantly on returnees from the United States and Europe, who have training and experience at Silicon Valley and other companies and universities and bring their knowledge home.

Advances are clear at the national level, in fields such as supercomputing, quantum communications, space, and robotics. In the private sector, advances can best be seen in mobile commerce, where China currently leads the world. While the innovations driving China’s commercial success are mostly incremental, they are increasingly enabled by investment in artificial intelligence (AI). Outside of mobile commerce—in fields such as semiconductors, software, commercial aircraft, and life sciences—China’s advance is more uneven. Even in those sectors, however, sustained investment is likely to bring change.

China’s innovation assets—leading private companies and public and private research centers—are primarily (but not exclusively) concentrated in three regions: Shenzhen and the Pearl River Delta, Shanghai and the Yangtze River Delta, and Beijing. Companies headquartered in those regions—Huawei in ICT, Tencent and Alibaba in internet and e-commerce, DJI in drones, Broad Group in construction, Geely in automobiles, and Mobike in bike sharing—exemplify the innovation that is taking place across a range of industries.

These companies dominate the Chinese market and are looking to global markets overseas for expansion. Products and services developed in Chinese markets don’t always transfer well outside China.

China also has an increasingly robust startup scene, with a rapidly growing number of incubators and accelerators. Many are sponsored by provincial and city governments, offering benefits such as grants or free rent. It is not clear, however, whether their rapid expansion reflects a similar scale of innovation, or whether it constitutes a bubble.

There is also growing private investment in startups, by large companies such as Tencent, Alibaba, and Baidu, and through an array of venture capital and private equity firms. Reflecting the scale of this activity, in 2016 China led Asia in the production of unicorns (companies with valuations of $1 billion or more) with 37; the country with the next largest number was India with 8. Internet companies are receiving more than half of China’s venture deal flow, and of China’s 46 unicorns in 2017, nearly half are backed by China’s largest internet companies.

Still, China’s startup support ecosystem remains a work in progress. Venture investors often look to monetize their investments quickly, reinforcing tendencies in their portfolio companies to go for short-term gains instead of transformational leaps (an area in which Silicon Valley excels). Most Chinese universities are also behind the curve when it comes to programs that generate and support entrepreneur-led startups.

To a degree that far exceeds other major economies, China’s technology development trajectory is deeply connected to government through a web of industrial policies set by the Communist Party, whose influence extends beyond provincial and local governments and state owned enterprises (SOEs) to private companies as well. This happens directly through embedded Party representatives and through incentives and disincentives that encourage private companies to align with government priorities. The most important policies impacting technology and innovation are the 13th Five Year Plan; Made in China 2025; the National Medium- and Long-Term Program for the Development of Science and Technology 2006–2020; the National Innovation-Driven Development Strategy Outline; the National Security Law; the National Cybersecurity Strategy; and the Social Credit System.

In the aggregate, these policies promote national corporate champions, “indigenous innovation” (the increased development of Chinese technology and reduced reliance on technologies of non-Chinese origin), and a transition to making both domestic and imported data systems “secure and controllable.” Required technology transfer to local partners by foreign companies investing in China, and the Great Firewall (which restricts access inside China to information provided by non-Chinese internet companies), advance these laws and policies. Weak but improving intellectual property protection adds to the challenge that both foreign and Chinese companies face.

In the process of supporting domestic innovation and security, these policies also create advantages for Chinese technology companies and disadvantage foreign ones. But this tilted playing field can also inhibit innovation through a too-heavy government hand and by restricting the free flow of ideas and information on which innovation thrives.

China and the Bay Area

China and the Silicon Valley/San Francisco Bay Area are closely connected through technology and innovation, a relationship that is growing stronger through inbound investment. California is the primary destination in the US for China’s outbound technology investment, most of which has been received in the last two years. The lion’s share of this is through acquisitions, primarily in ICT (Information and Communications Technology) concentrated in Silicon Valley, and spread across semiconductors, ICT equipment, and software. Investment in biotechnology is also significant. This investment comes primarily from private as opposed to state-owned companies. Government funds, however, are also used to fund acquisitions.

Leading Bay Area companies such as Uber, Lyft, and Airbnb have received substantial infusions of capital from China, primarily through Chinese participation in funding rounds. Many startup and early-stage companies have also received funding. Typically, Chinese investors in these smaller companies look for cutting edge technologies to fill competitive gaps in China. For the startups, Chinese investment brings not just capital but better access to Chinese markets. This activity is supported by a growing number of Chinese accelerators, corporate innovation centers, and venture funds that have opened in the region.

Looking to the Future

There is no question that China is innovative. This is evident in its leading private companies, which are among the best in the world in their fields. The question of innovation is complicated, however, by the role of China’s government which, to a degree unseen in market economies, directs resources, supports domestic technology companies, inhibits foreign ones, and mandates technology transfer. Under its policies, every player in China’s economy—public or private—is ultimately linked to national objectives. This presents complex options for US technology companies that want access to China’s growing market but do not want to risk their technology being lost or compromised. It also raises issues regarding the long-term impact of China’s technology investment in the US.

Chinese companies are demonstrating increased prowess in leveraging China’s market scale, government support, foreign technology, and their own R&D to generate innovation-led growth. While most SOEs and smaller companies still lag, the best Chinese companies can be strong partners, as well as formidable competitors. As China’s already considerable innovative capacity grows, this will present both challenges and opportunities for Bay Area/Silicon Valley companies. Either way, every company will need a China strategy or a global strategy that takes China into account. With the right conditions, both sides can benefit from an open door. Business decisions and government policy will determine whether China’s technology trajectory leads to increasing conflict or to expanded partnerships between the world’s two largest economies.

While not definitive on the question of innovation, several metrics are indicative of China’s technological development and its capacity to marshal resources in order to innovate at the national level. Below are a few examples. 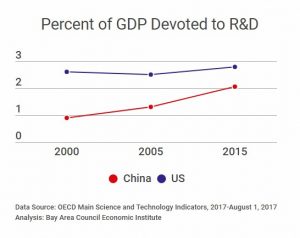 A breakdown of spending patterns shows that while the US continues to lead in basic and applied R&D investment—with about one-third of its $500 billion annual spending going to early-stage discovery research and two-thirds into later-stage “development”—China allocates 84% of its R&D spending to later-stage research connected to commercial products. This has implications for the kind of research at which China excels—incremental as opposed to science-based. 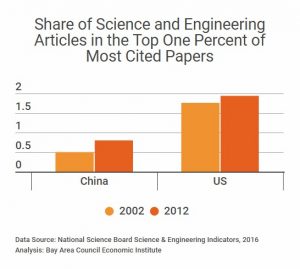 China’s score suggests two things. First, the change in China’s score between 2002 and 2012 indicates that the quality of its scientific research has improved significantly. Second, China’s share of top 1% articles is still smaller than would be expected given its total production of science and engineering papers. 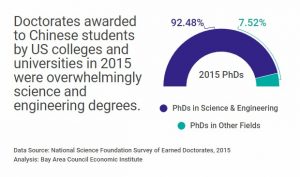 Despite China’s production of engineers in large numbers, top-level talent is still hard to find there compared to the United States. As a result, Chinese companies often draw on Chinese-born engineers in the United States, many of whom are graduates of US universities or have worked on big-data infrastructure at companies such as Google or Facebook. This also includes Chinese students who return home after studying in the West—a large and rich base.

To draw more of these senior-level graduates home, China’s central government has created the Thousand Talents initiative, promising jobs at R&D facilities and SOEs (state owned enterprises), and special living benefits. So far it has been a success, attracting high-level talent not just from universities but from top tier companies as well.