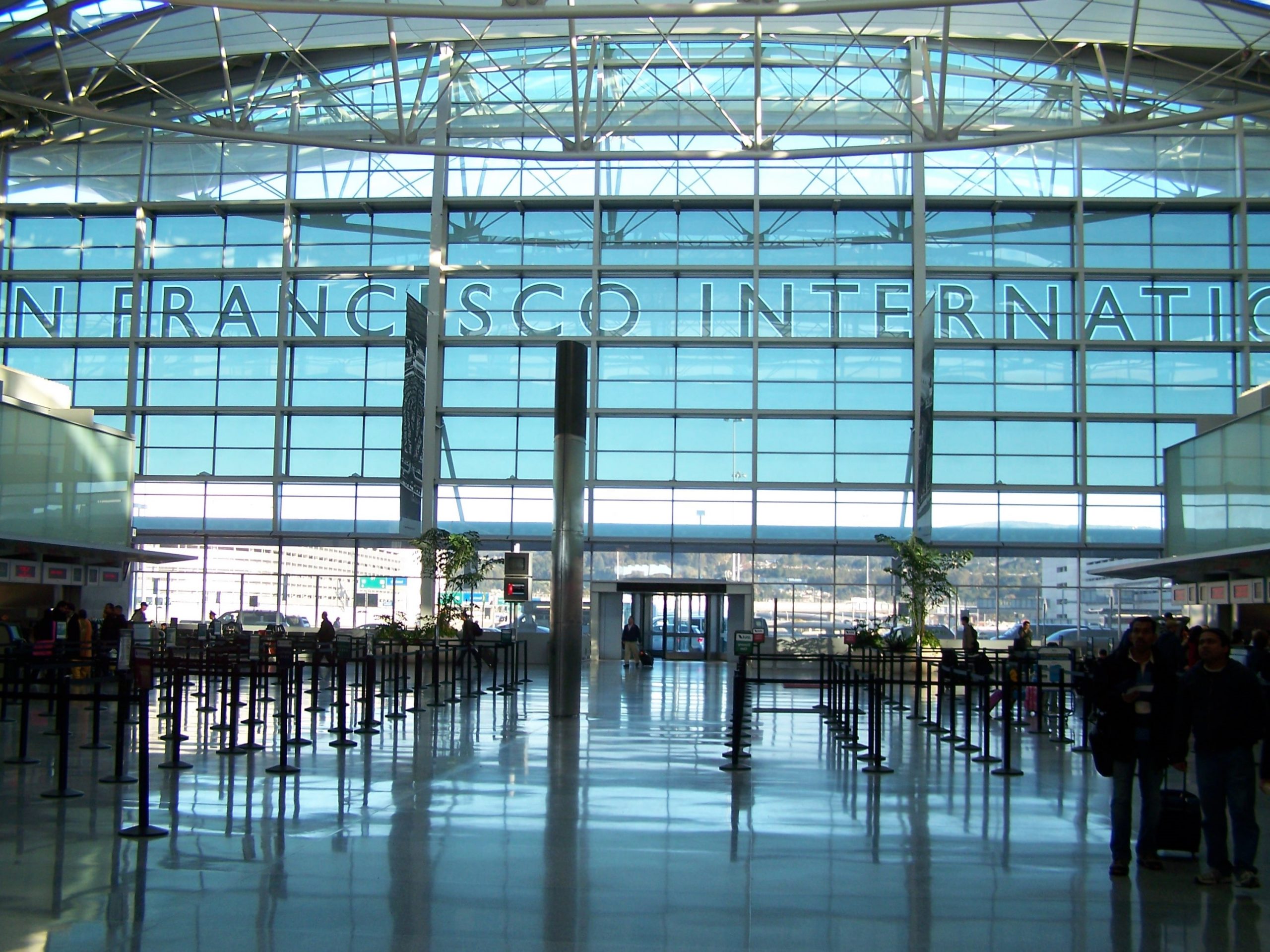 • Housing permits for the first six months of the year surpassed both 2021 and 2019 levels though still well below the region’s new RHNA targets. Air travel levels picked up though Bay Area passenger levels remain well below pre-pandemic levels.

• August 2022 brings major challenges to the global, national and regional economy with the Russian invasion of Ukraine, increases in interest rates amidst continuing high inflation, and the Bay Area challenges of housing, transportation and competitiveness. Positive signs are that inflation may be slowing, Ukrainian grain is hitting the market, COVID cases have started to decline and K-12 schools are in a more normal school year.

• Another challenge, discussed below, is where will employers find workers for continued job growth.

This is the chart that gets wide media attention and focuses on our region’s below-average job recovery rate. It is accurate and shows the better U.S. and California data. But look at the next chart to see the Bay Area catching up. 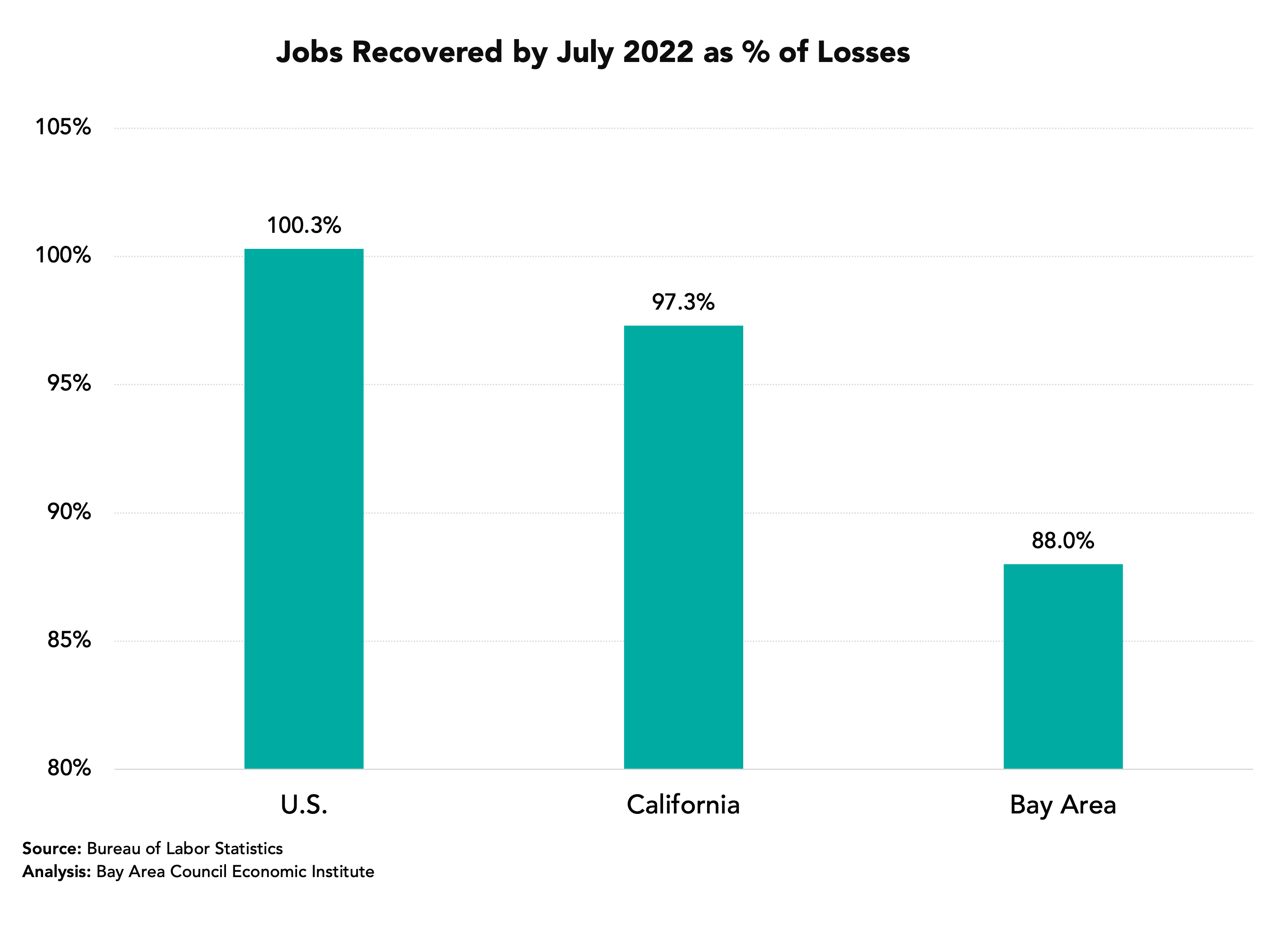 The Bay Area’s 5.2% growth rate topped all the other major economic regions in the state as well as the state and national job growth rate. 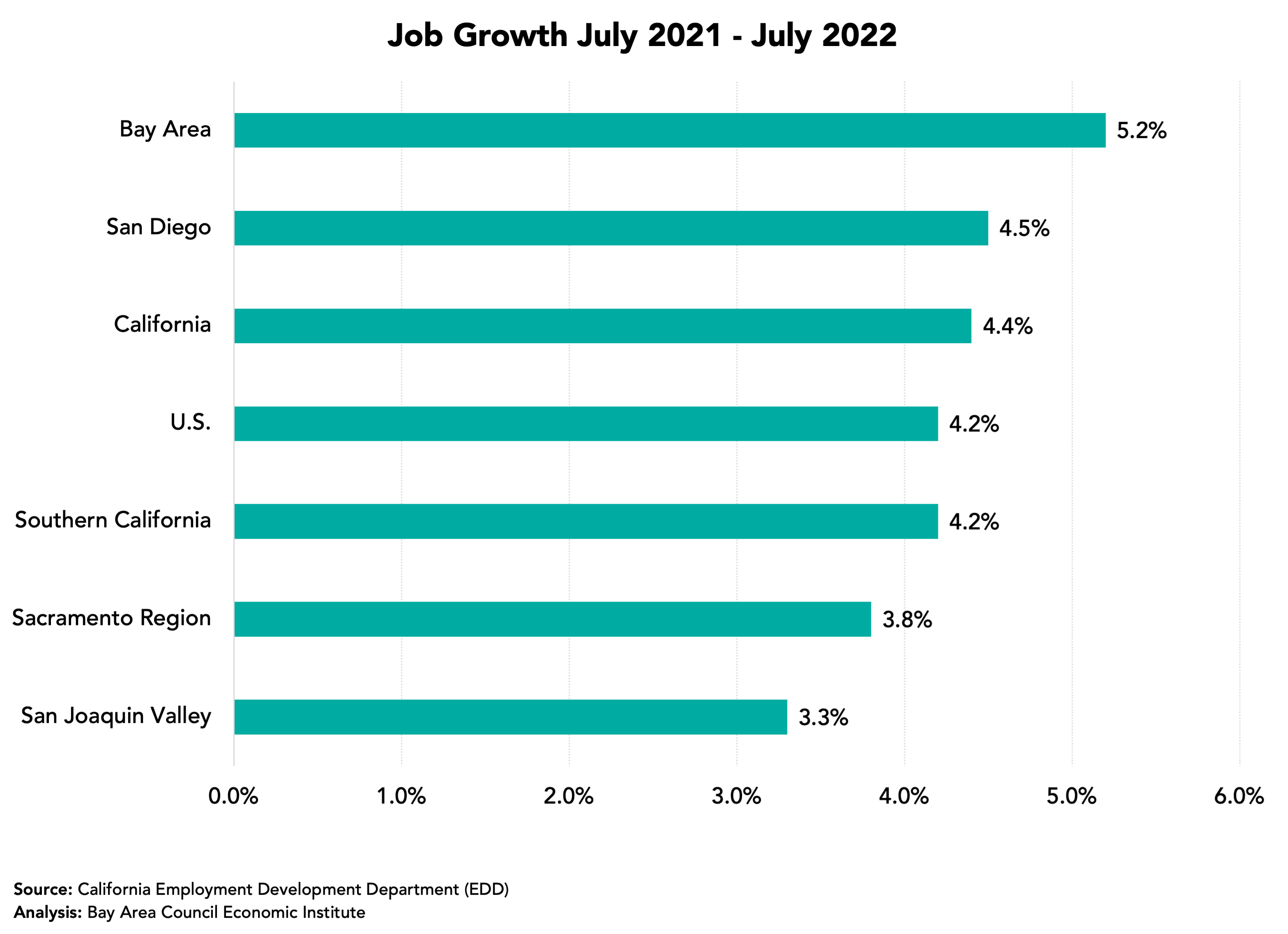 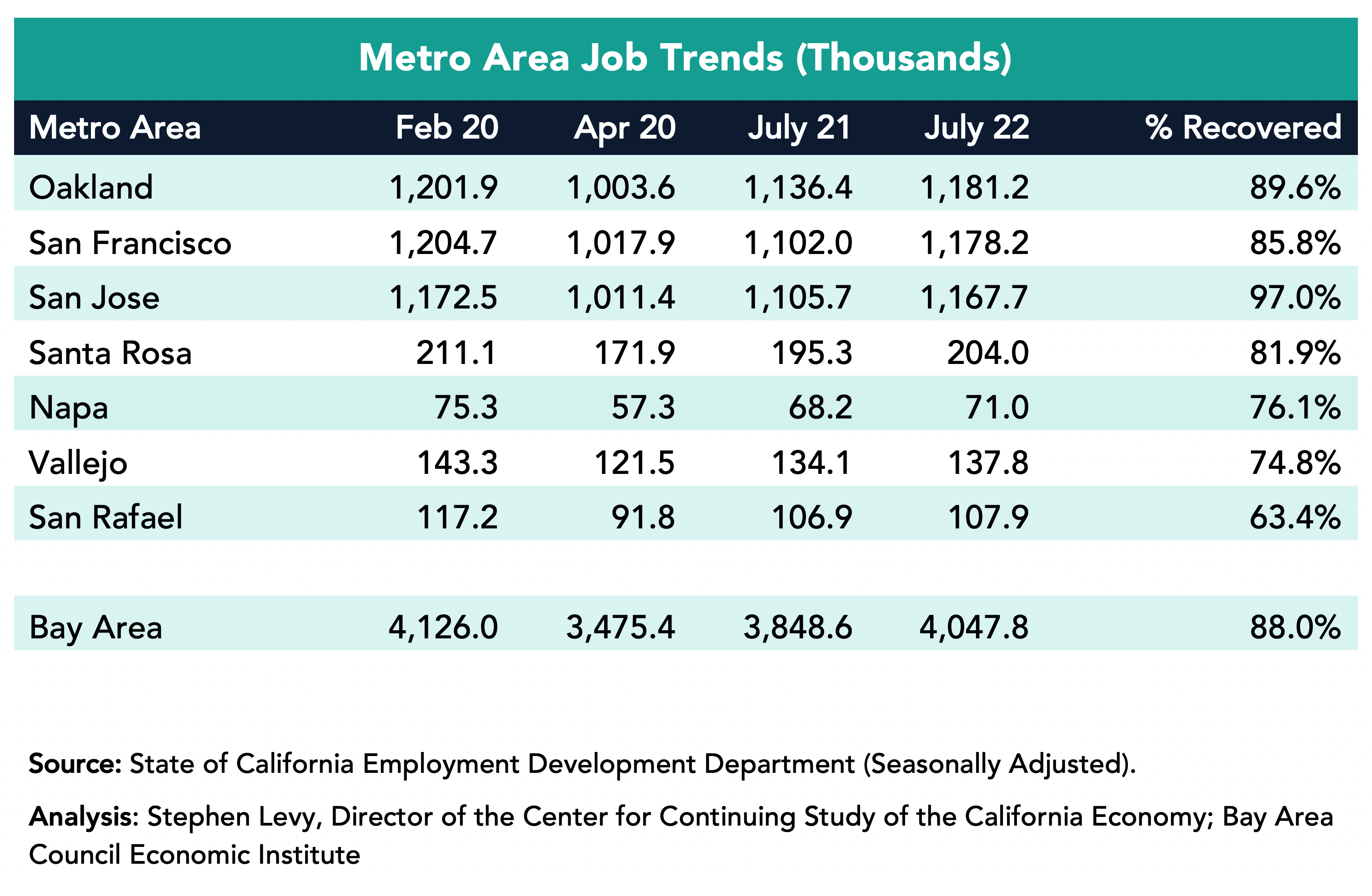 Five sectors—Construction, Manufacturing, Transportation and Warehousing, Information and Professional and Business Services—exceeded pre-pandemic job levels in July 2022. Financial Services at 30.6% had the lowest recovery rate and the Leisure and Hospitality sector has now recovered 81.3% of lost jobs by July 2022 and has the largest recent gains. The Government sector is now slowly recovering the jobs lost between February and April 2020.

Note that all sectors combined minus the government sector have now recovered nearly all the lost jobs as shown on the bottom row. 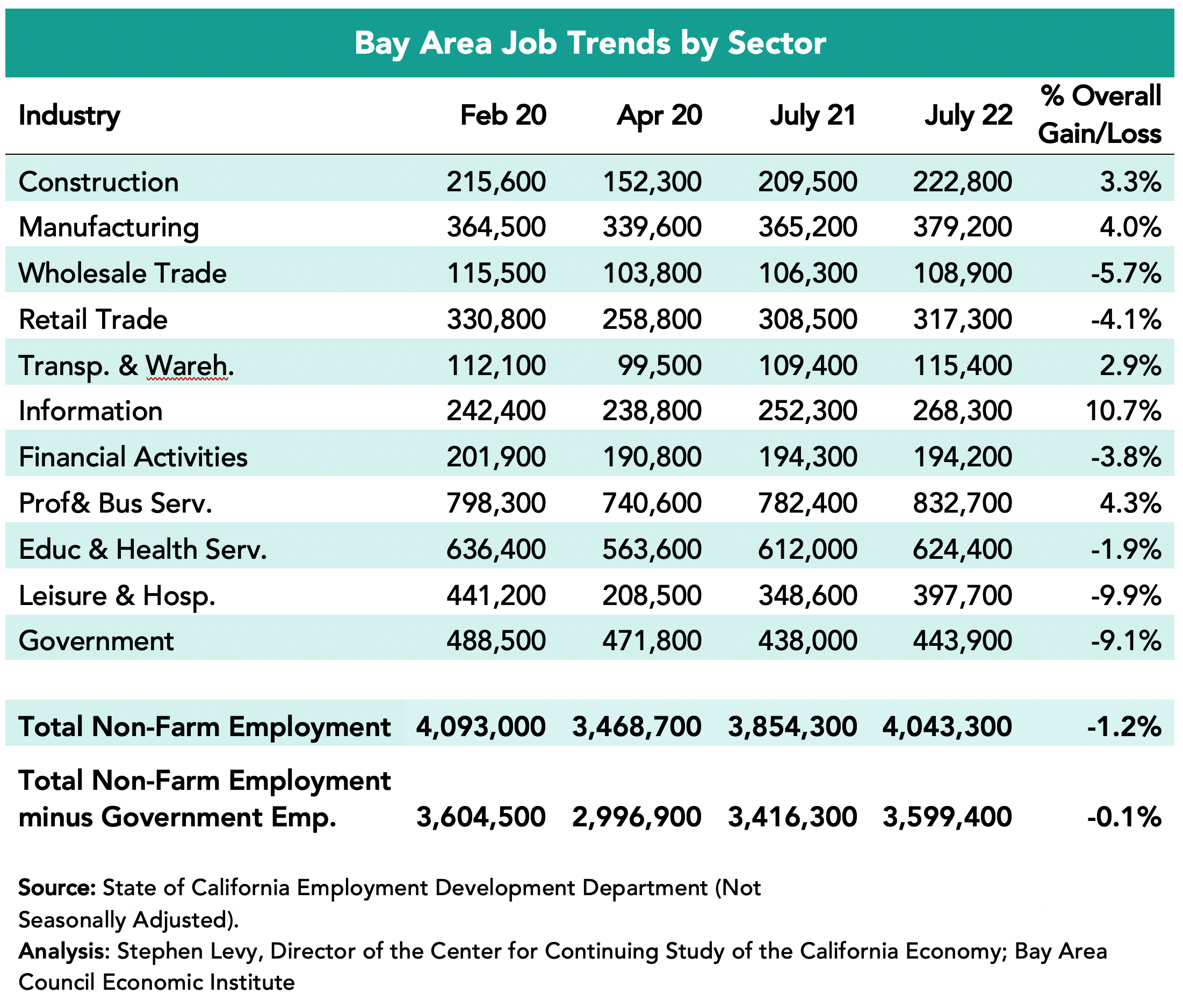 Unemployment rates go up in the summer on the not seasonally adjusted data as education jobs decline during summer break. Still Bay Area rates in July 2022 were below pre-pandemic levels though the months are not comparable. And there were 104,700 unemployed residents in July 2022 compared to 114,500 in February 2020. 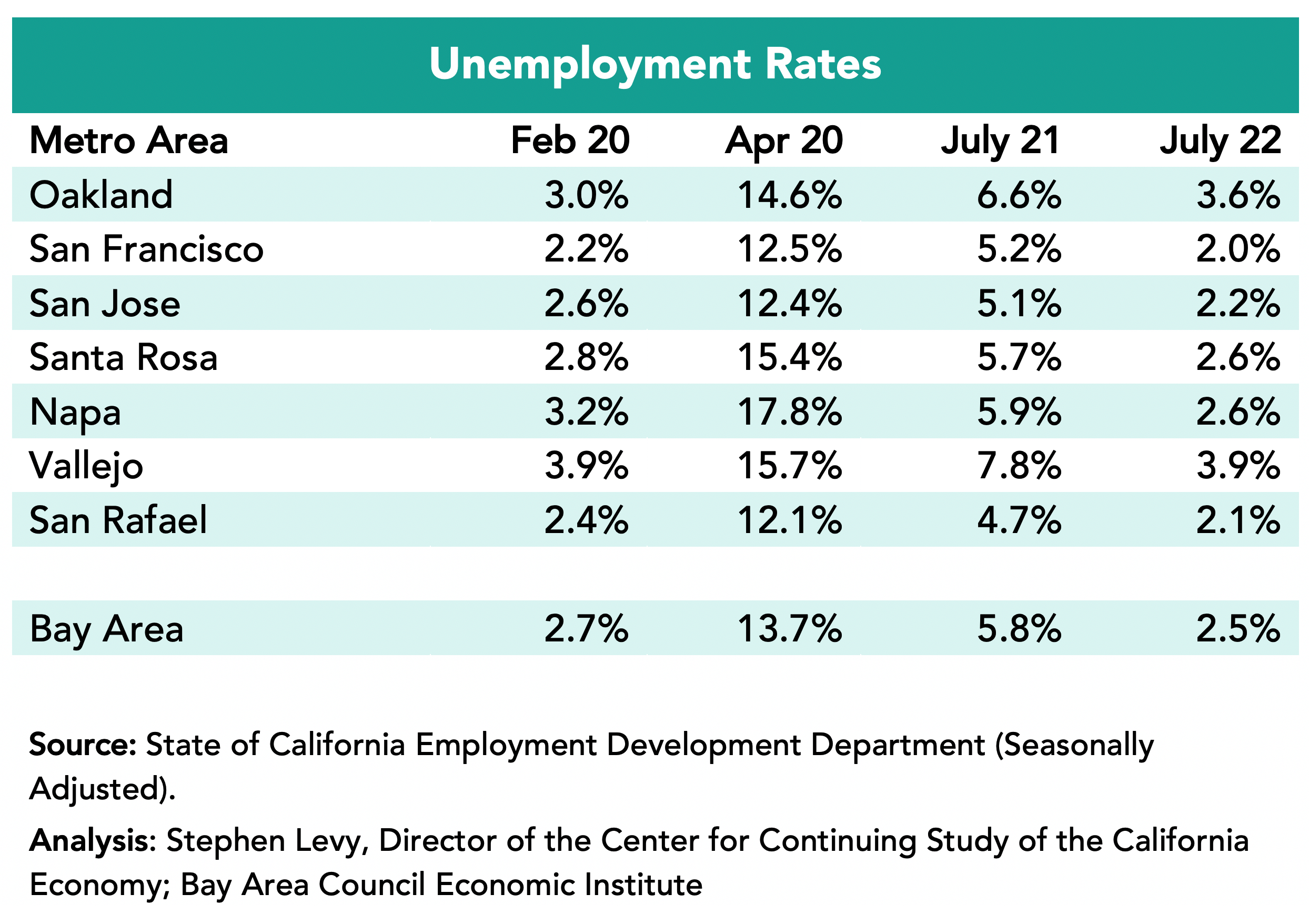 Though the recent pace of job growth has been encouraging, it is not clear where new workers will come from with low unemployment already and low population growth. Perhaps the new school year going back towards normal will allow parents who dropped out to return to the workforce. And it is possible that more workers can come from remote locations so the Bay Area and state can see job growth without more residents working. Job openings remain high and sectors like air travel are constrained by lack of enough workers 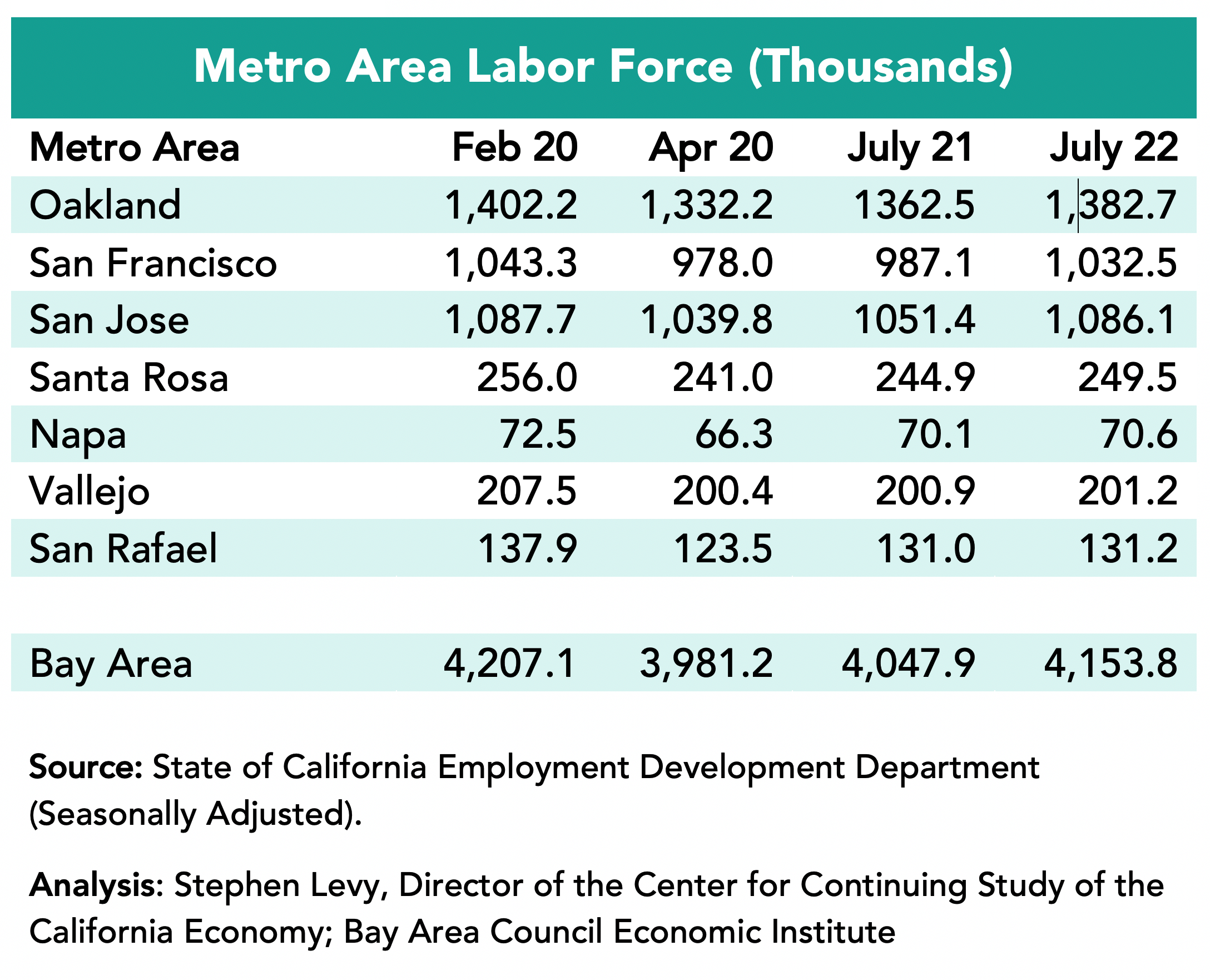 Permits levels in the first six months of 2022 exceeded 2019 and 2021 levels though East Bay permit levels were below earlier levels.
The other counties showed large year over year gains. In addition, now there are almost daily reports of new housing projects being proposed and approved though it is often a long step until these units are completed and on the market.
Bay Area cities are updating their Housing Elements currently and learning about the requirements to meet their RHNA goals. It is possible that the RHNA and update process is encouraging cities to loosen development standards and to approve more projects.
While the current growth in permits is a positive sign, these levels are still below the RHNA targets for the region. More needs to be done. 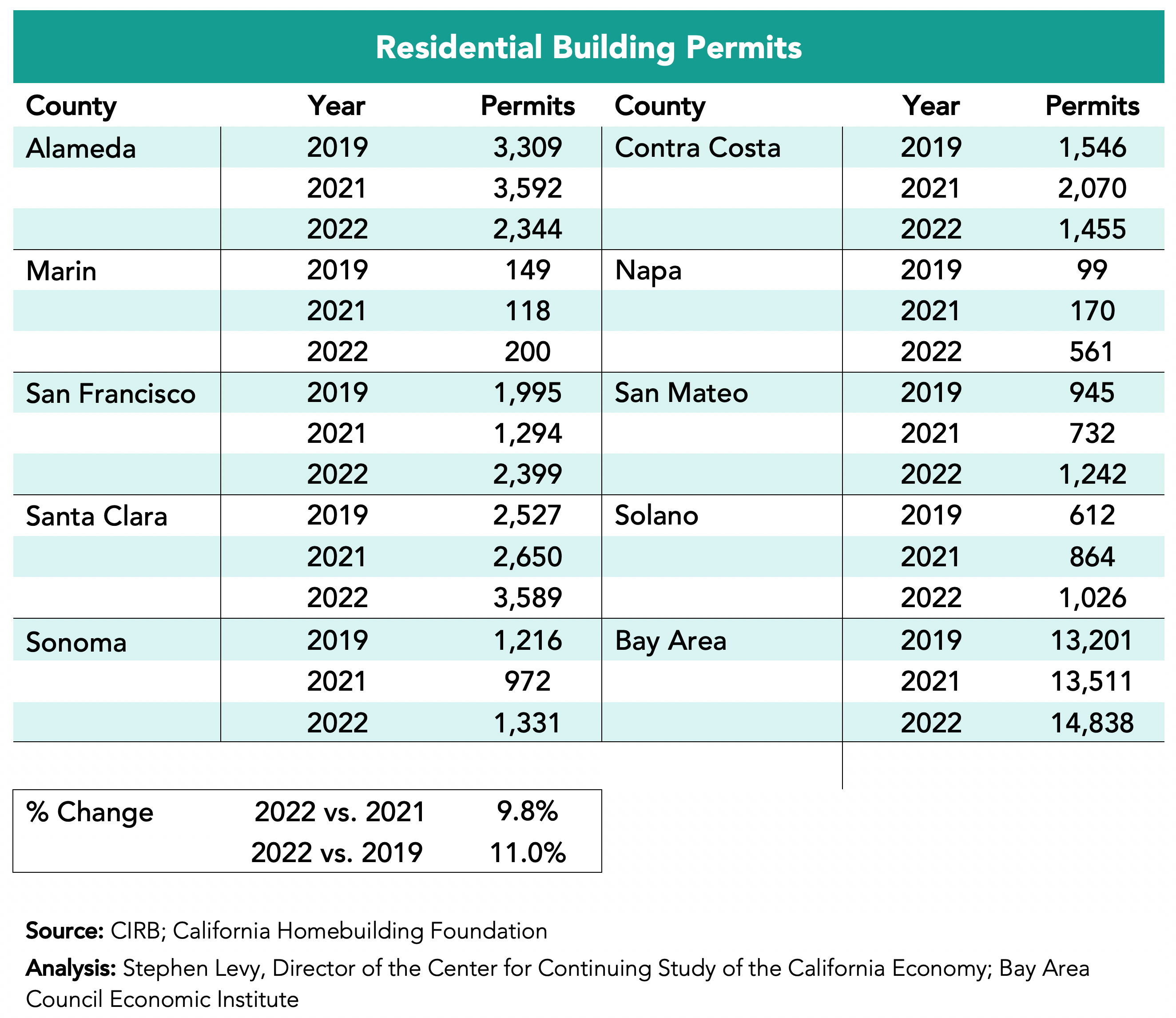 Passenger levels are up over 2021 levels but still well below 2019 totals for the first six months of the year. Bay Area airports trail other regions in California in the recovery to pre-pandemic travel. A part of the reason is the large decline in international travel that is only recently beginning to grow again.