Payroll Job Growth Slumps but That is Not the Whole Story

The Bay Area added 6,900 payroll jobs in May with substantial payroll declines in added jobs for each of the past four months. But this is not the full story of what happened in the Bay Area economy in recent months.

• During this period the number of residents with jobs of all kinds increased by 92,200.

• June 2022 brings major challenges to the global, national and regional economy with the Russian invasion of Ukraine, large increases in interest rates amidst continuing high inflation, the recent spike in Bay Area COVID cases and the ongoing Bay Area challenges of housing, transportation and competitiveness.

This is the chart shown in media around the region last weekend and it is accurate. Payroll job growth has declined substantially. 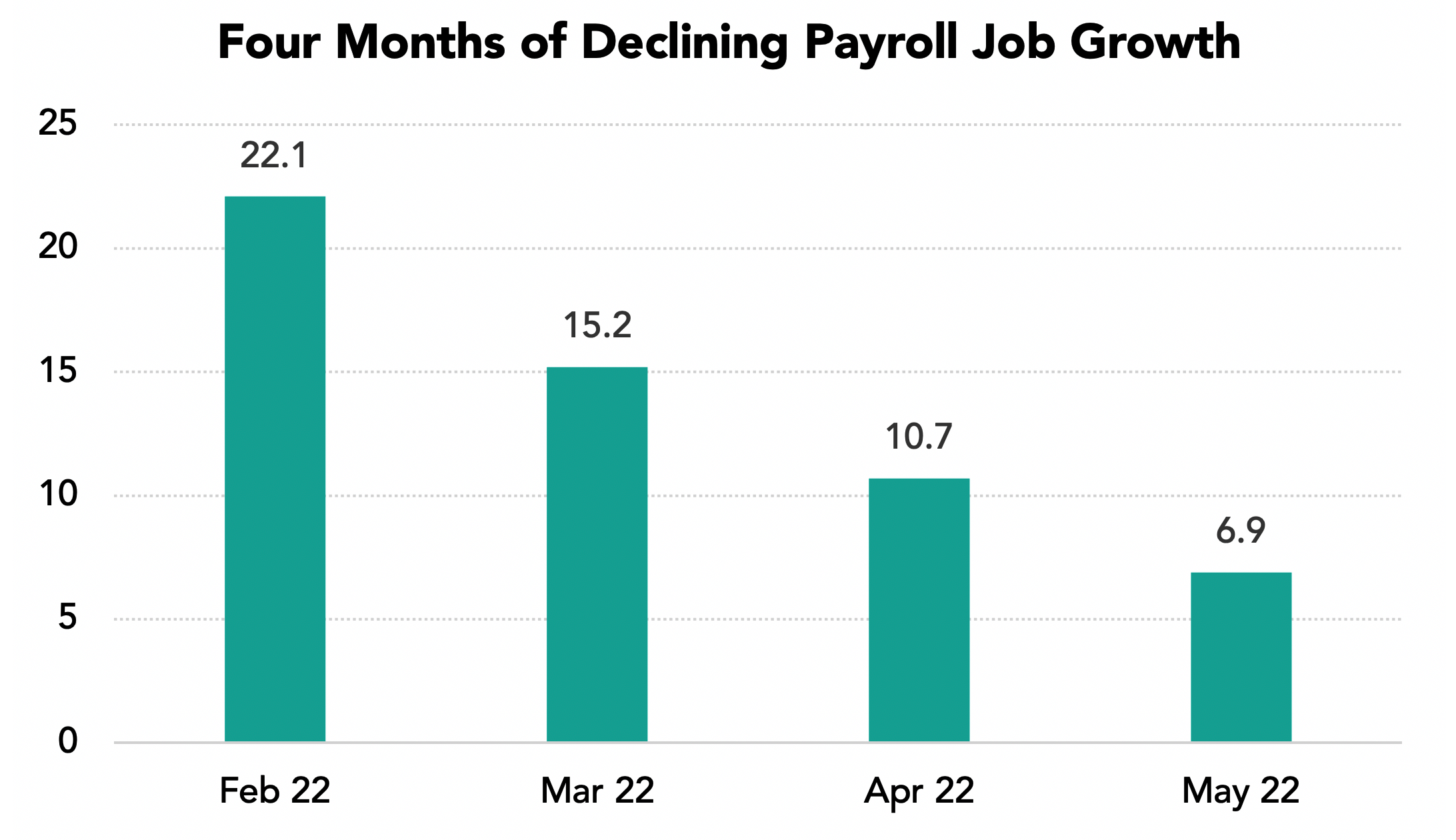 But the Number of Residents with a Job Grew More

These data come from the household survey, which is smaller than the payroll survey and more volatile month to month. But it is accurate over time. The inference is that workers are finding jobs in traditional self-employment and gig work. The discrepancy between payroll job and employed worker growth (59,200 versus 92,200 for the past four months) could be for many reasons. One is the difficulty in hiring in some industries from our high cost of housing. One could be a decline is jobs at tech startups. Workers unable to find jobs in declining sectors may be switching to self-employment.

But these data offer a counterpoint to the disappointing payroll job trends. 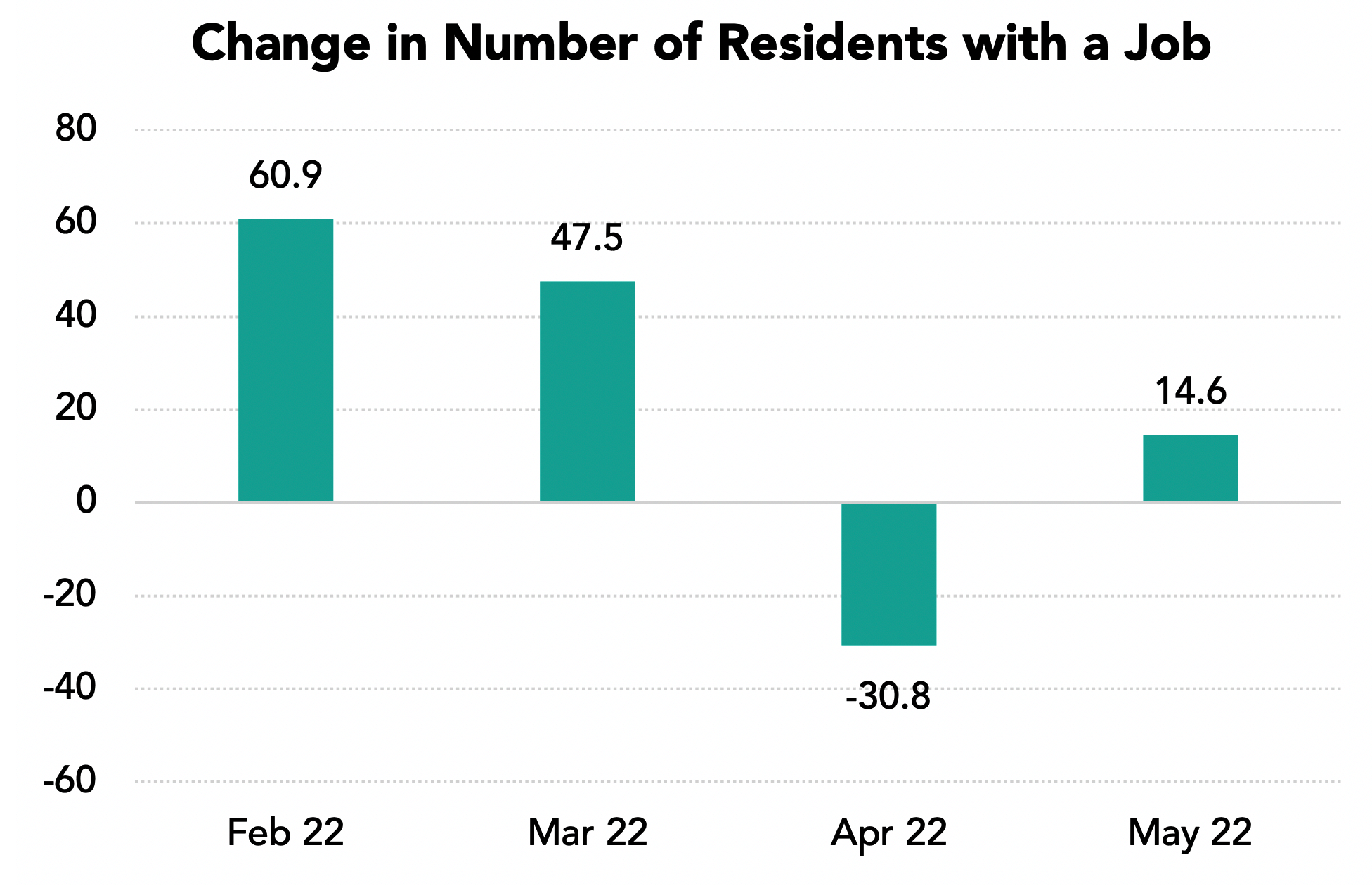 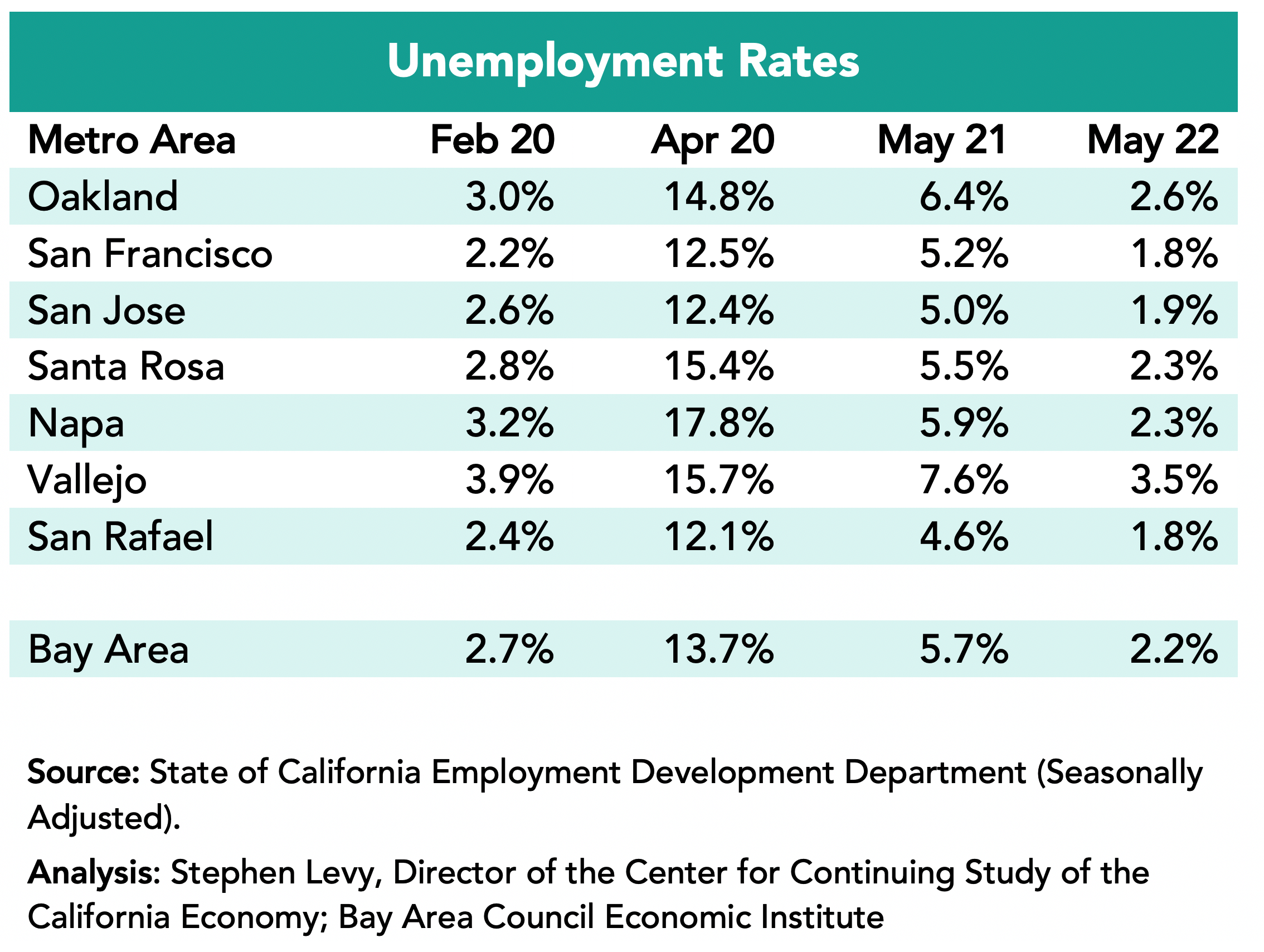 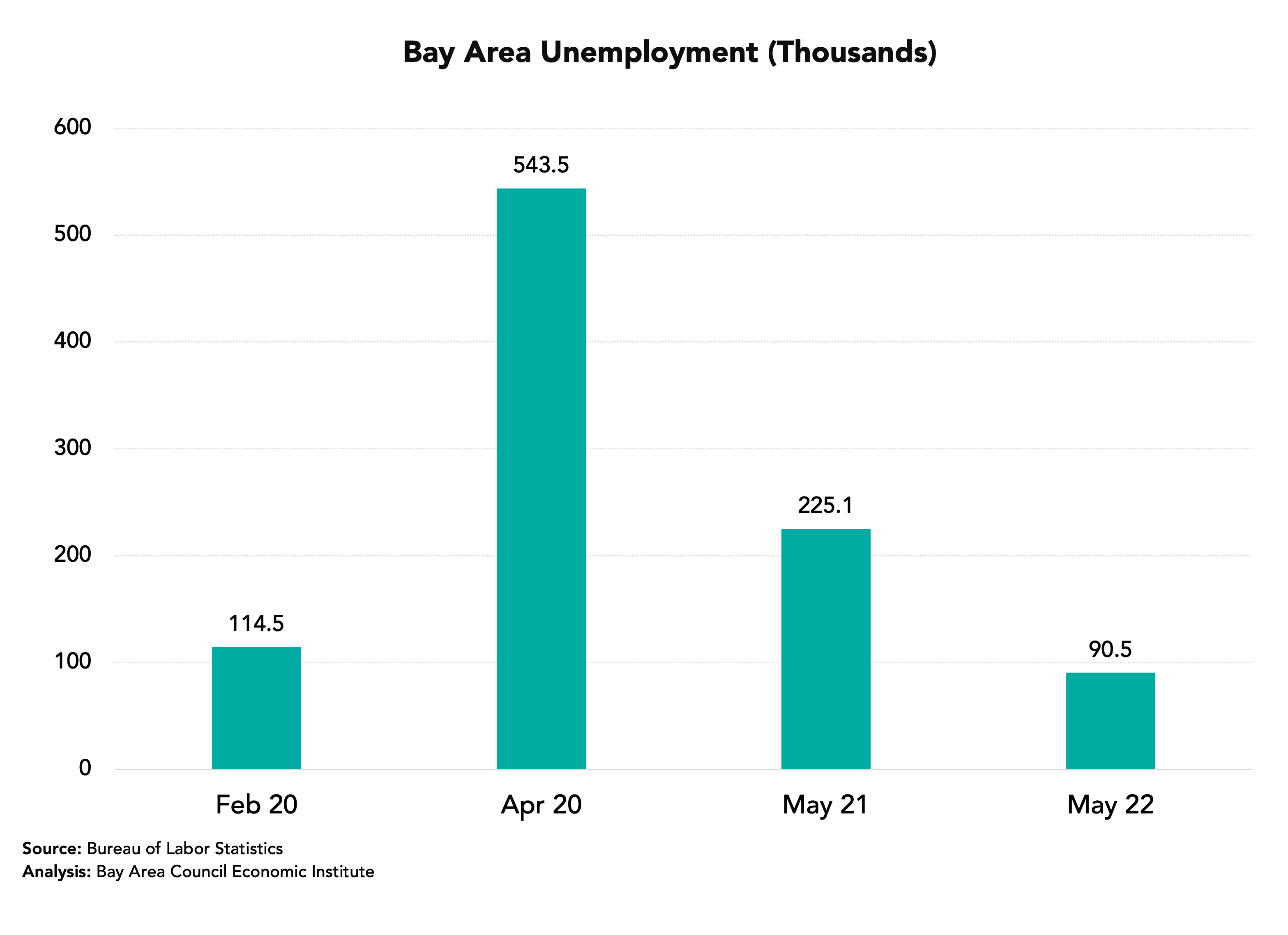 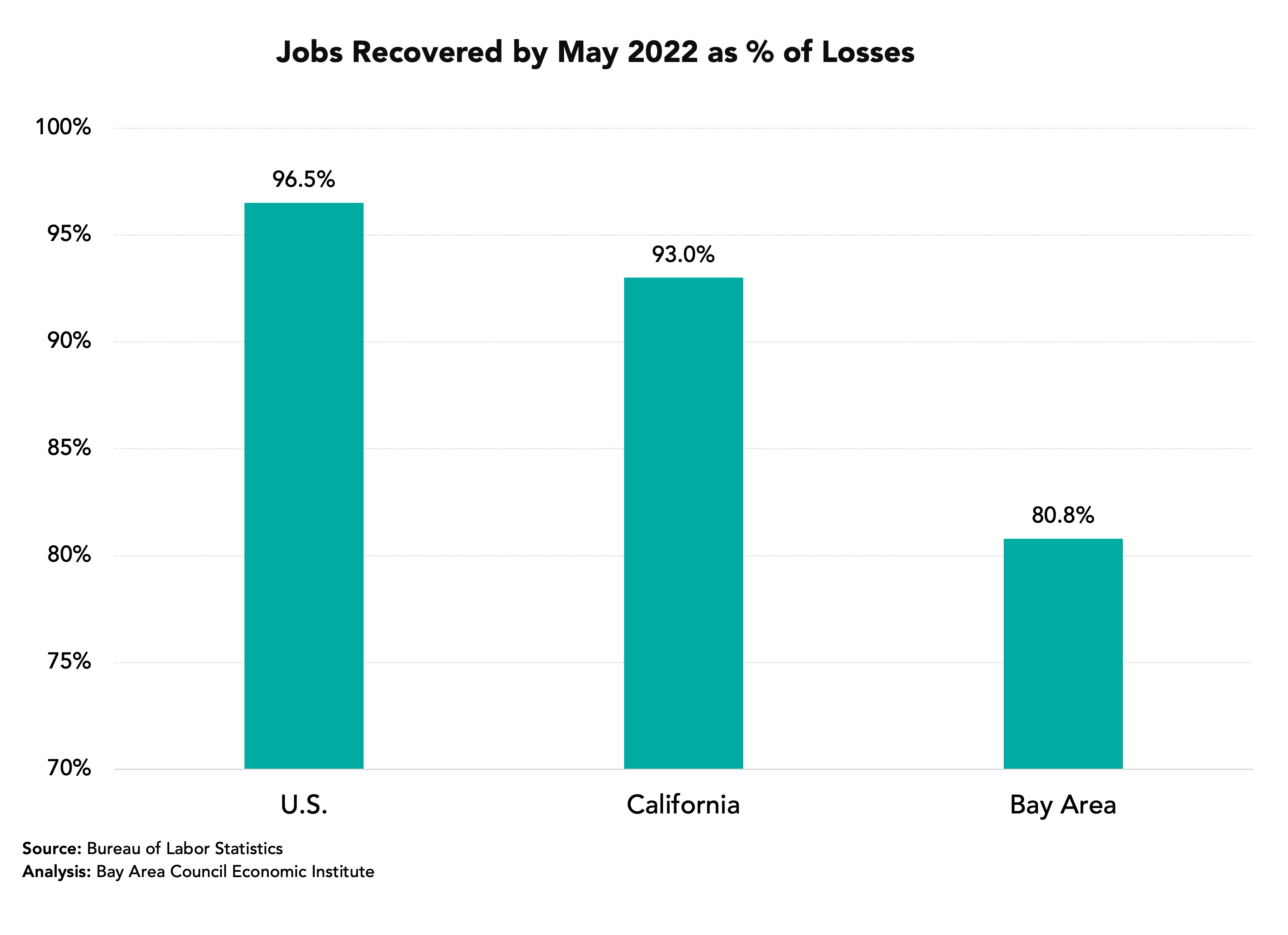 By May 2022 the region had recovered 80.8% of the payroll jobs lost between February and April 2020. This is a lower recovery rate than the state and nation, though the region has closed the gap in recent months.

While the region has recovered just 80.8% of the non-farm payroll jobs lost between February and April 2020, it has recovered 88.0% of the decline in the number of residents with jobs. The explanation for the gap between the two measures is an increase in self-employment jobs, most likely gig work jobs. 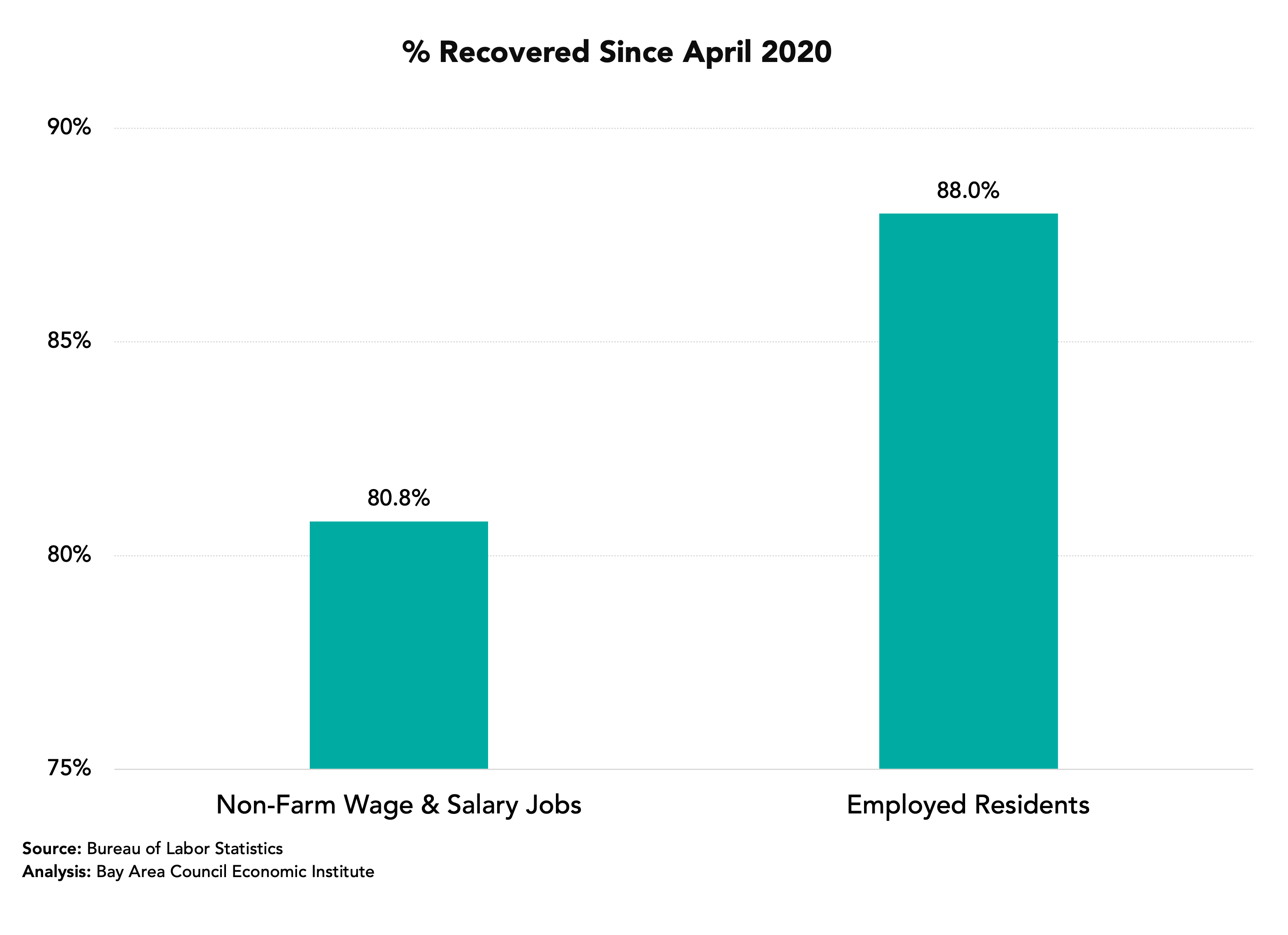 Payroll Job Growth Strong for the Year Though Lagging Recently 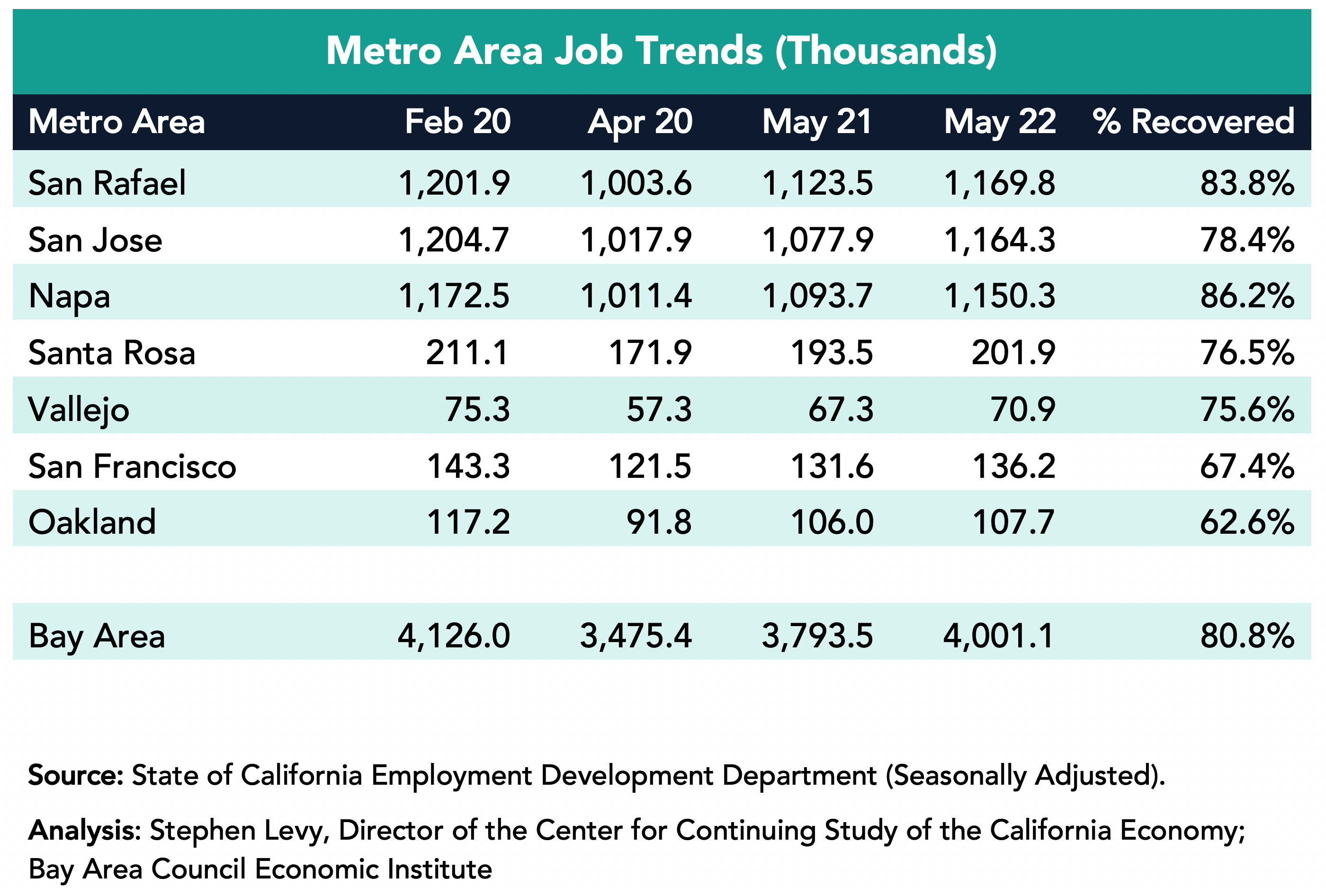 But 102,900 Workers Have Not Rejoined the Workforce Since February 2020

Residents who are not in the labor force are not counted as unemployed. As a result, the number of unemployed residents can decline while some are still prevented by choice or lack of child care or work in industries that have not fully recovered. The number of residents not in the labor force has increased recently, perhaps in response to the rise of COVID cases in the region. 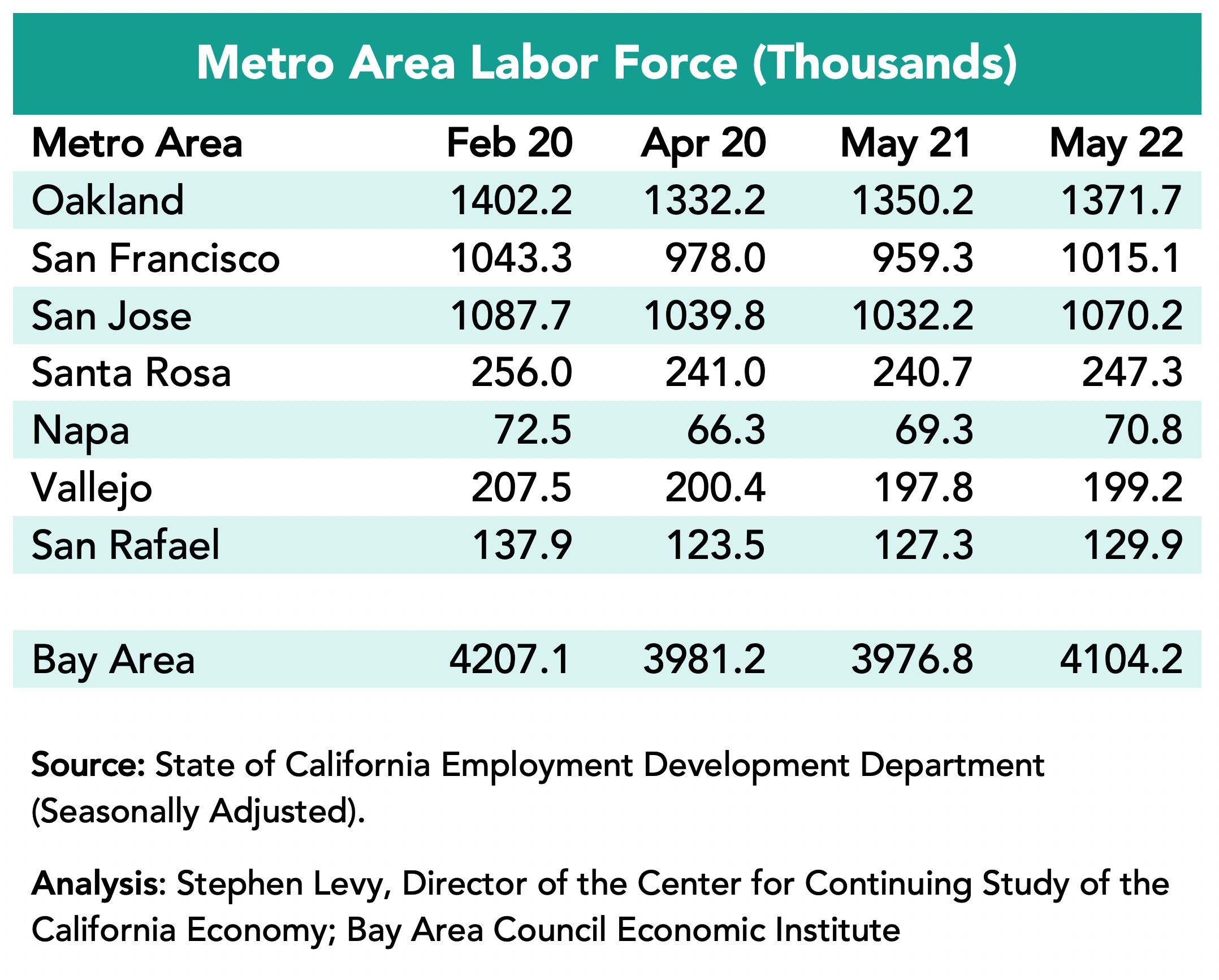 Four sectors—Manufacturing, Transportation and Warehousing, Information and Professional and Business Services—exceeded pre-pandemic job levels in May 2022 and Construction and Education and Health Care Services were close to full recovery. On the other hand, the Leisure and Hospitality sector recovered only 74.7% of lost jobs by May 2022, though travel and tourism jobs are now in a strong recovery. The Government sector is now slowly recovering the jobs lost between February and April 2020.

In the past two months Leisure and Hospitality and Government have shown the largest job growth.

Note that these data are not seasonally adjusted. 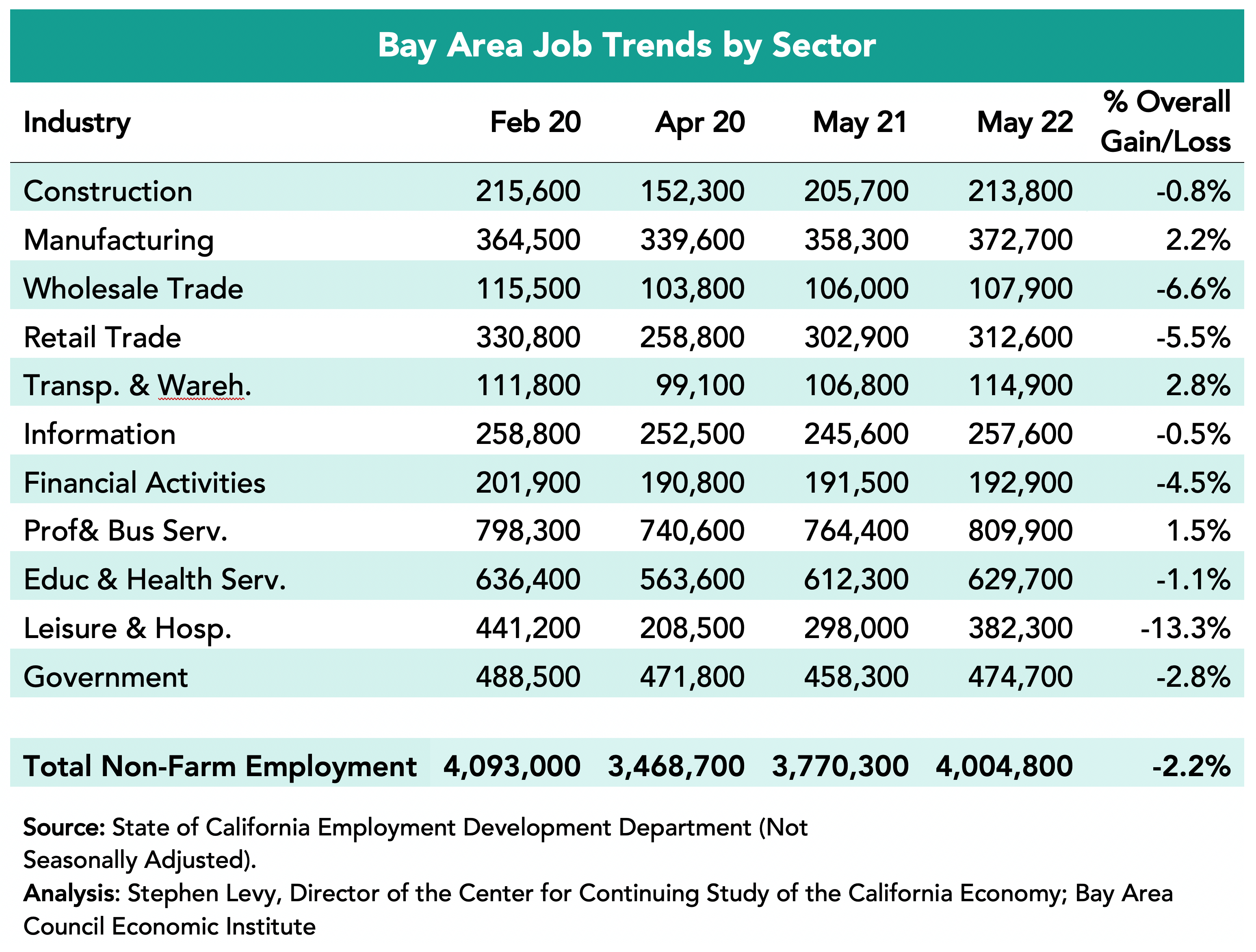