• The past two months have brought discouraging economic news for the near-term as a result of the virus spread and resulting restrictions on activity in the Bay Area. The region lost 20,900 jobs in Leisure and Hospitality (hotels and restaurants), saw an increase in unemployment of 34,300 with the regional unemployment rate jumping from 5.9% in November to 6.8% in December.

• The Bay Area recorded added 17,300 jobs in November down from 32,900 in October. The activity restrictions should limit job growth while they last.

• Between April and December, the Bay Area recovered 39.5% of the jobs lost between February and April trailing the state and nation.

• At the same time, news of vaccine approval and distribution, a possible stimulus package and the Biden administration focus on immigration, infrastructure and job growth point to a better outlook by mid-year 2021. The usual caveats about housing supply and affordability and maintaining a competitive economic environment remain. 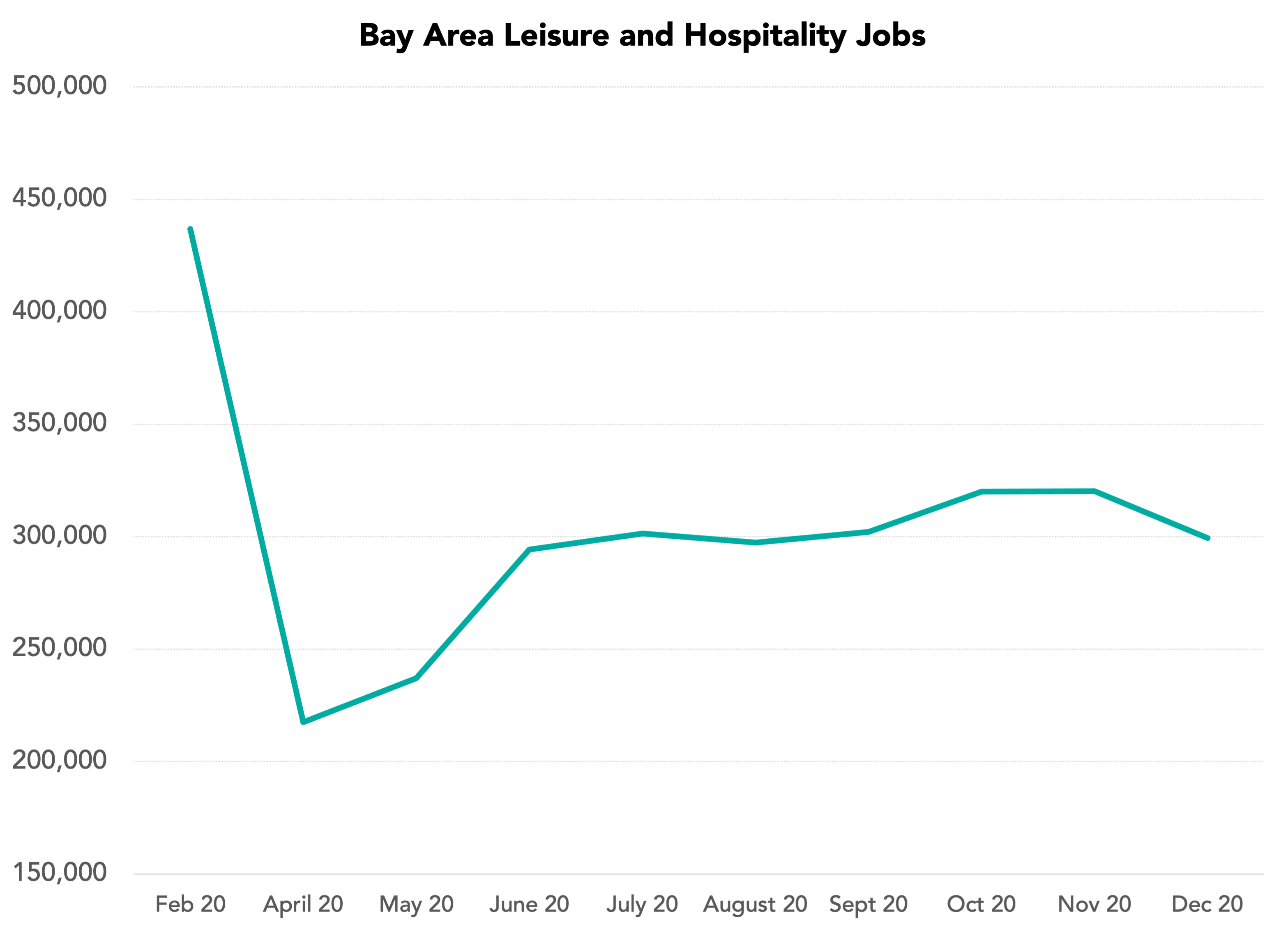 The state and Bay Area recovered a smaller share of the jobs lost by December compared to the nation. This is the result of our more cautious reopening pace and the more than 80% decline in business and visitor travel and resulting loss of spending and jobs. 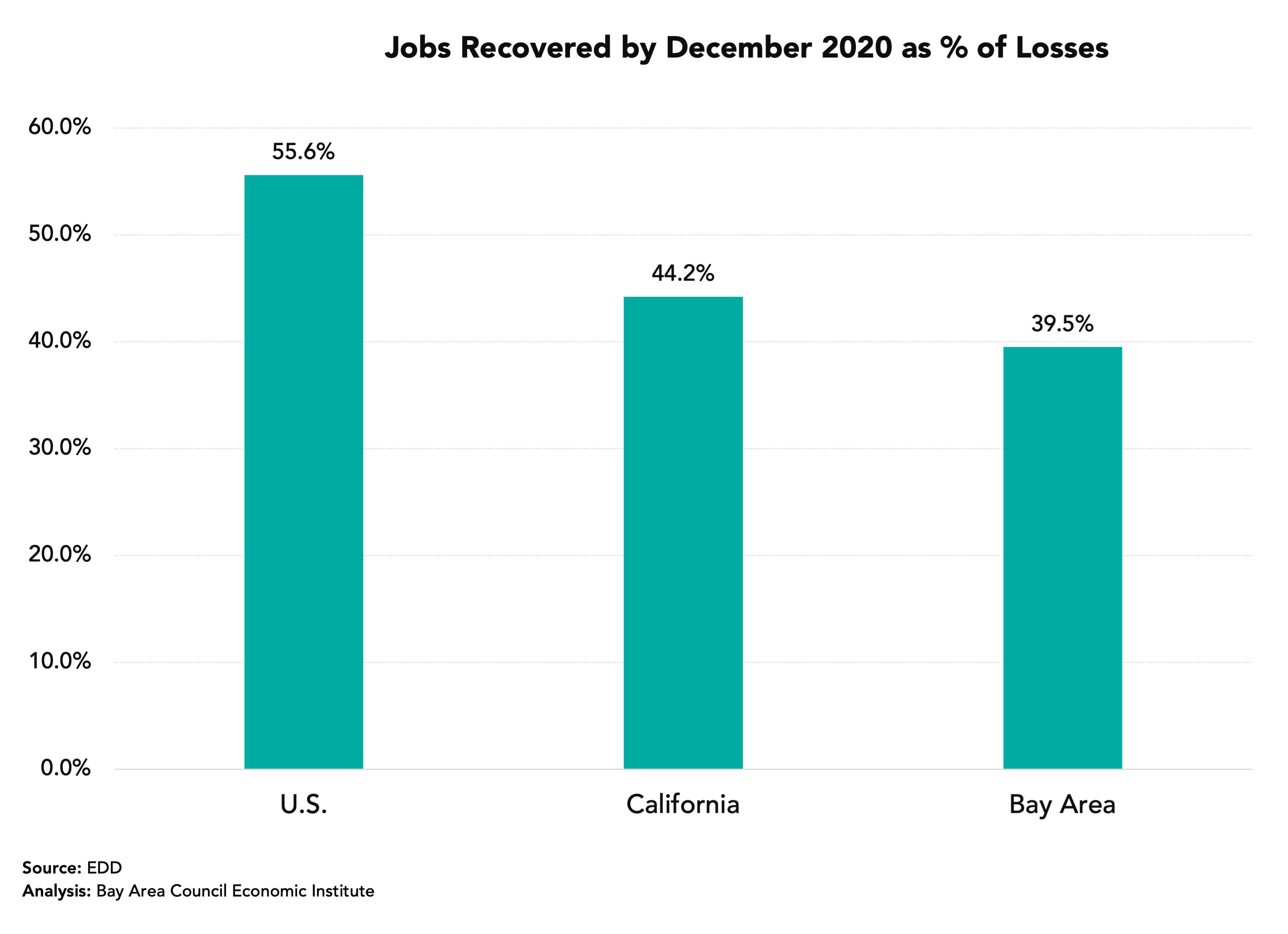 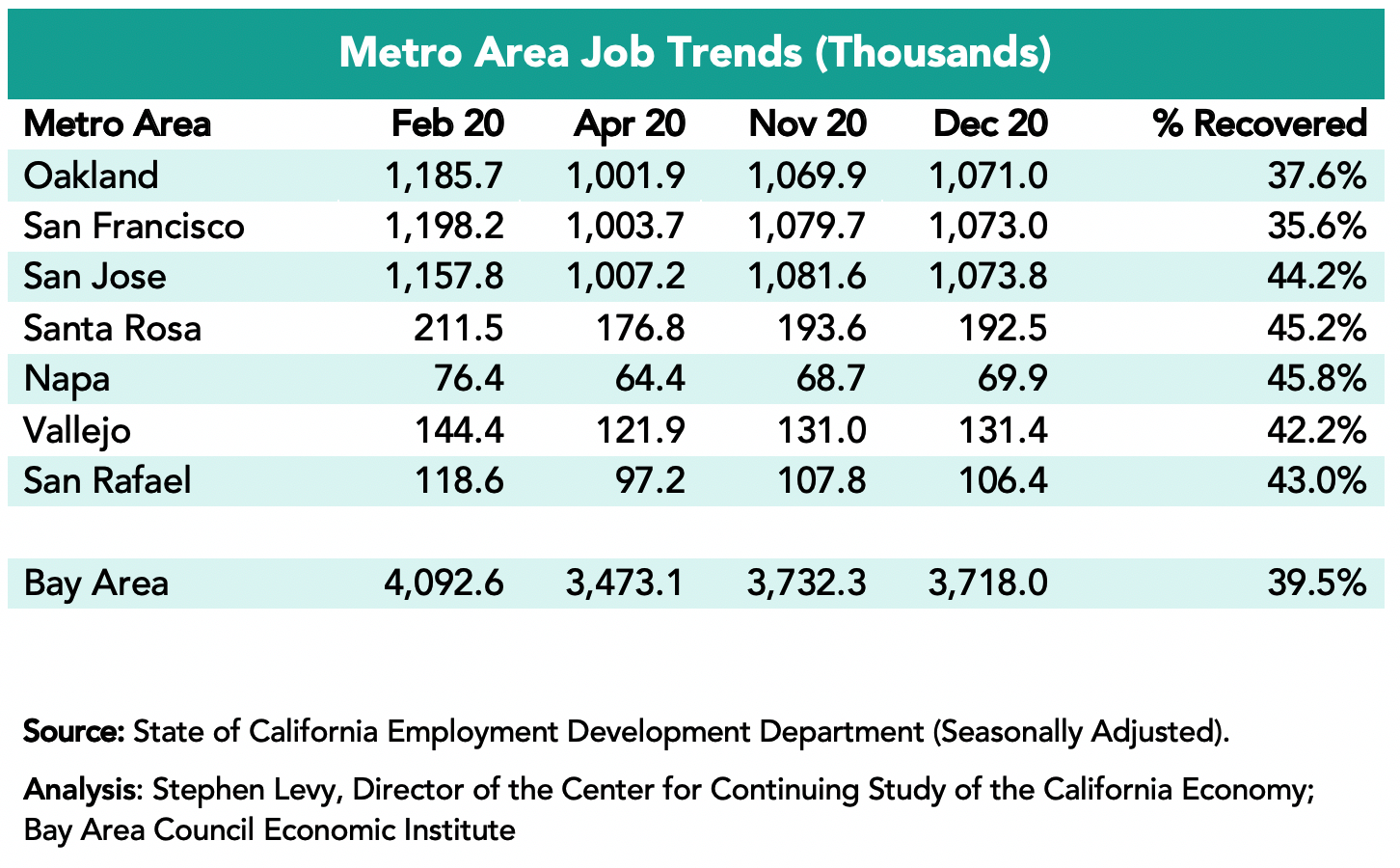 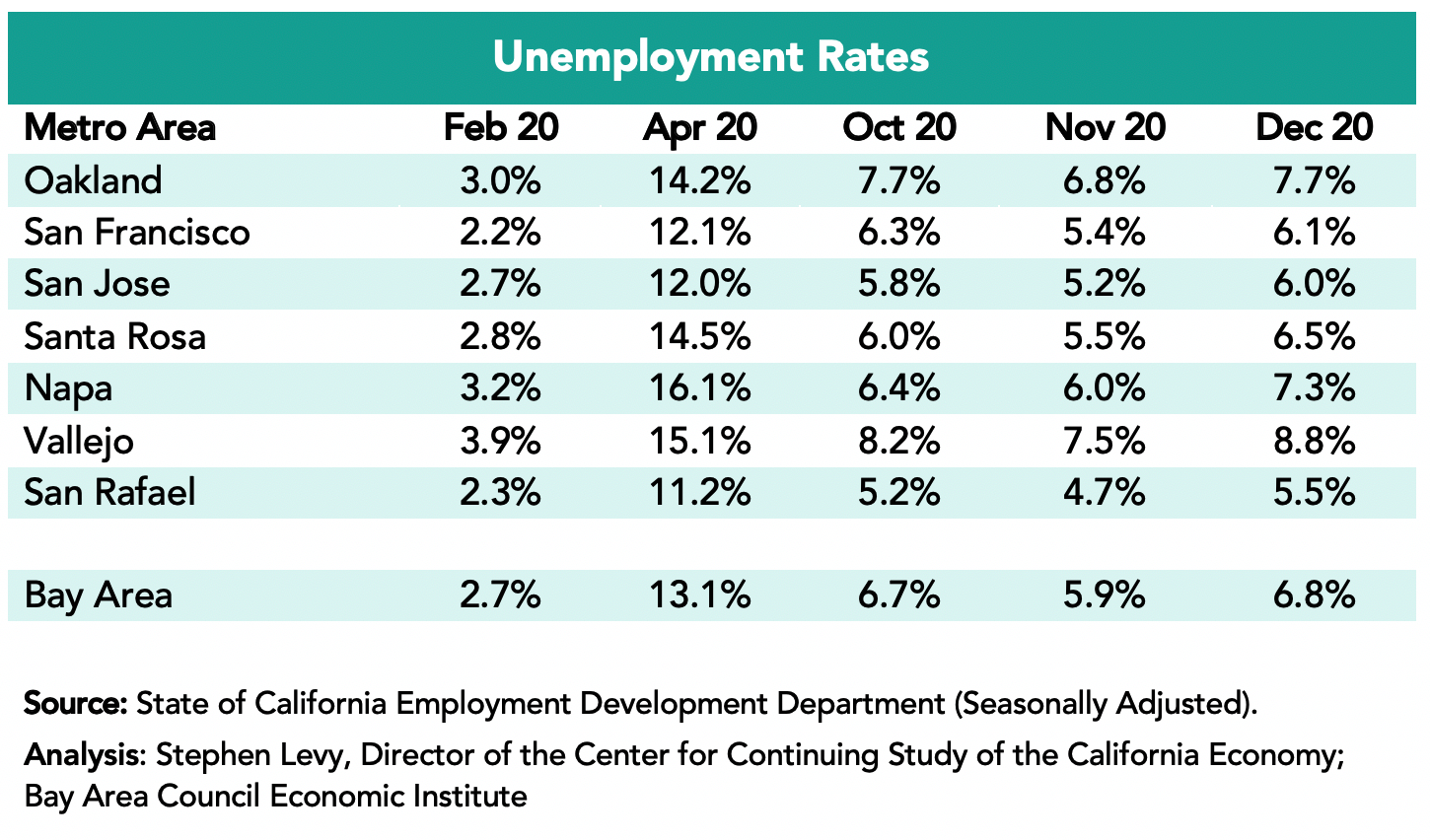 The number of unemployed residents rose in December to 279,200 from 241,900 in November. There are still more than twice as many residents unemployed compared to February before the pandemic spread. And the people who left the labor force are not counted as unemployed. 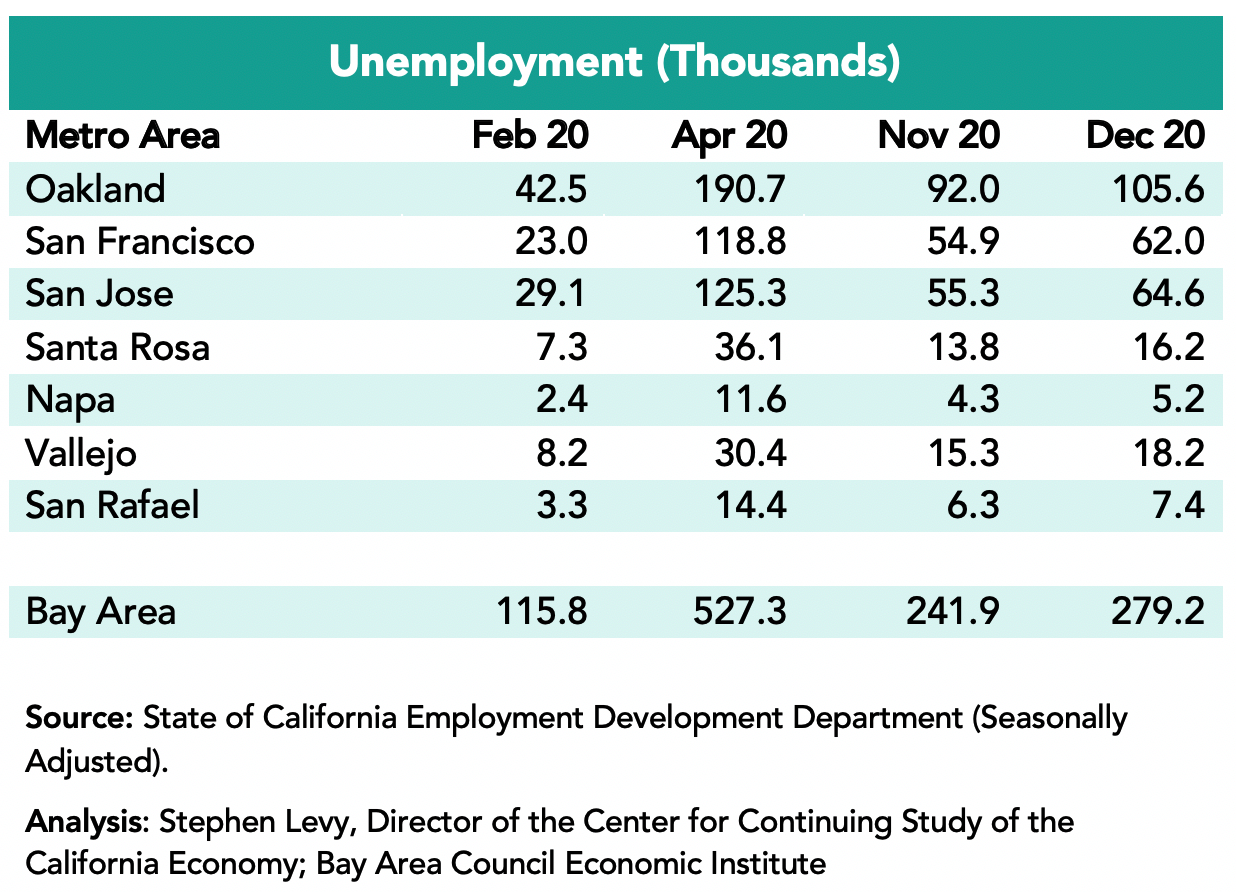 The largest job losses were in Leisure and Hospitality where half the jobs went away between February and April. Financial Activities (121.0%) showed the biggest recovery by November while the Wholesale Trade sector had a relatively small recovery rate so far along with Manufacturing, Leisure and Hospitality, Government and Information. Construction and Business and Professional Services recovered over 80% of the lost jobs. 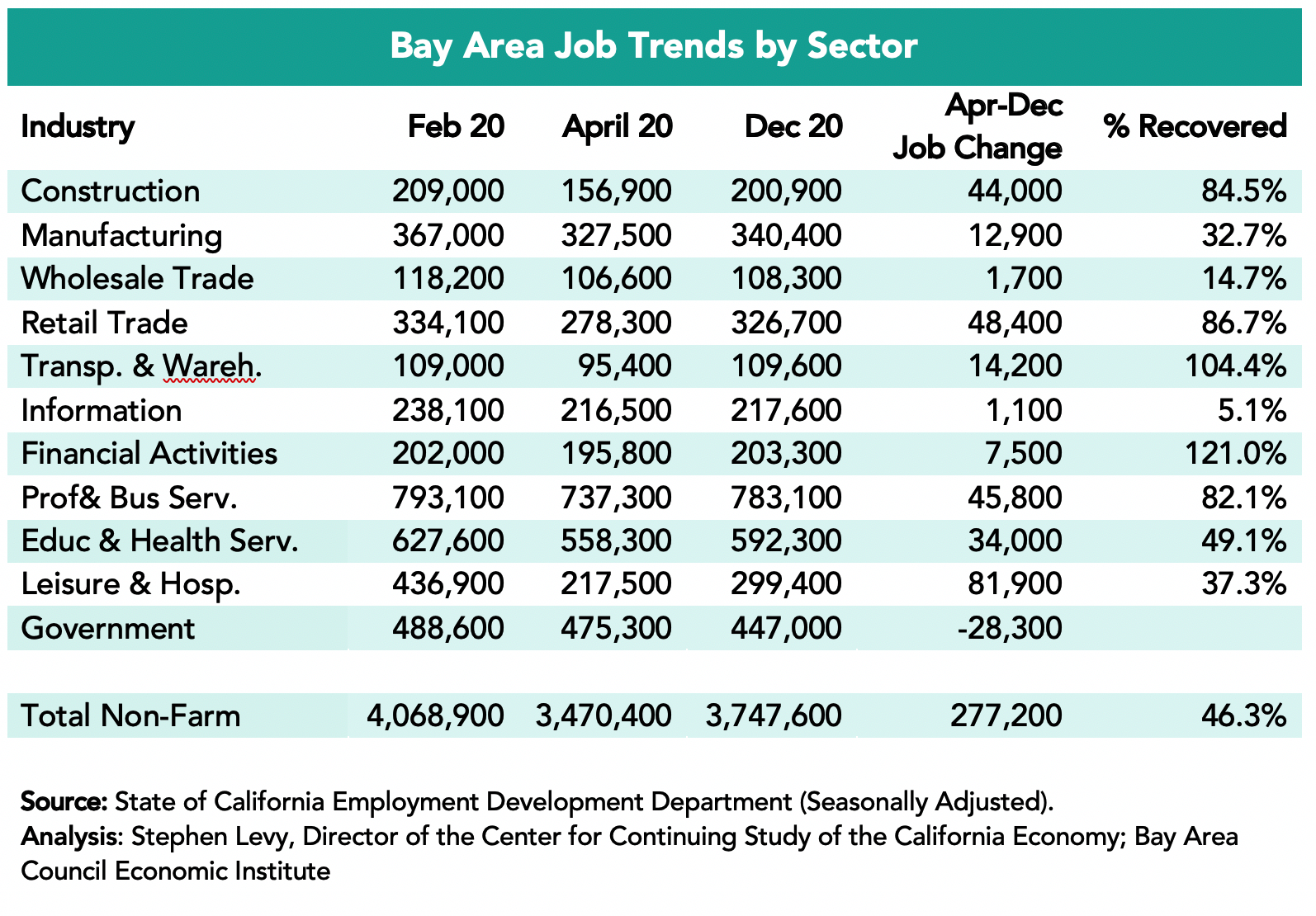 Airport data is late in being posted. San Jose reports a 76.4% decline in November compared to last year despite a surge at Thanksgiving. Oakland reports a 67.5% decline for the same period.

And, finally this alert from a recent BAC email.

With jobs and investment continuing to flee California, identifying the key issues and solutions to the state’s worsening business climate is imperative. Bay Area Council CEO Jim Wunderman today joined a virtual town hall hosted by Chapman University and including a panel of many of the state’s leading business and academic leaders to discuss the disastrous consequences of failing to take seriously the threat to California’s economy. The discussion comes as the Council launches a new statewide initiative focused on reversing the exodus of talent, companies and investment over concerns about high taxes, onerous regulations and the multiple threats of a historic housing crisis, growing homelessness and escalating impacts—wildfires, drought, extreme weather—of climate change. As well, how COVID is dramatically altering the considerations of businesses in deciding where they need to locate.

The Council will circulate a link to watch the recorded town hall next week. To learn more about the Council’s Repair California initiative and how you can participate and support the work, please contact Chief Operating Officer John Grubb.