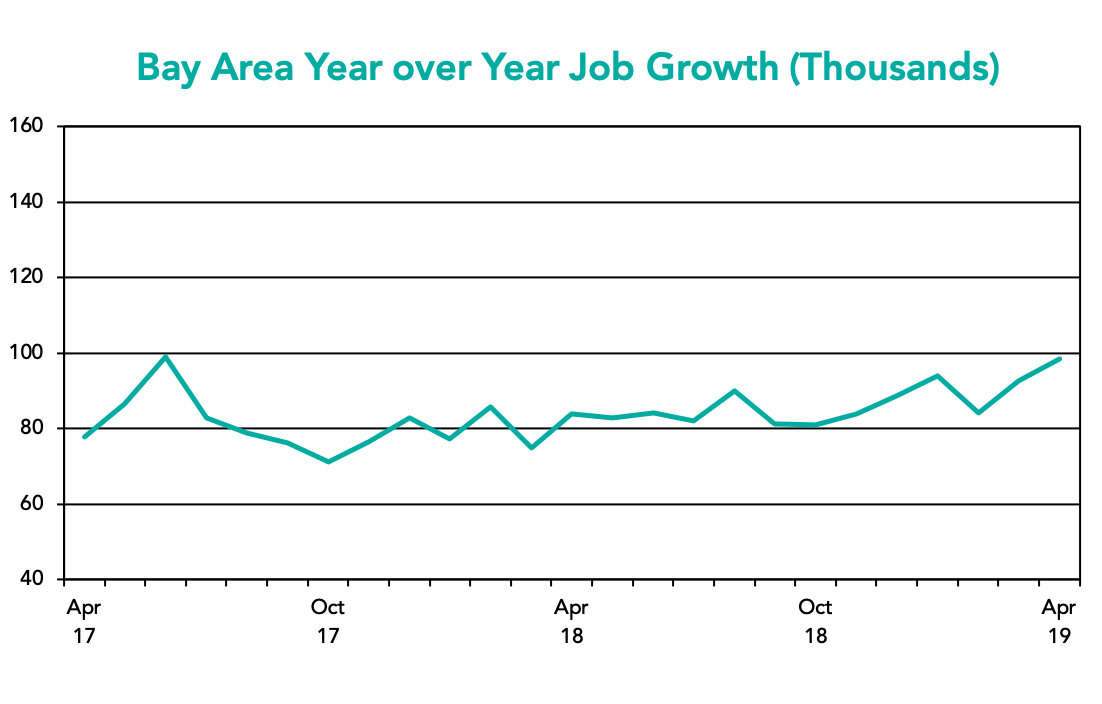 The highlights:
• Bay Area job growth surged again in April led by gains in the San Francisco and San Jose metro areas. Year over year growth rose to the highest level in two years.
• Labor force growth slowed though the month to month data is volatile.
• The regional unemployment rate fell to 2.5% and the number of unemployed workers fell to the lowest level since the recovery began.
• With job growth far outpacing labor force growth, the implication is that more workers are commuting in from lower cost housing areas outside the nine county region.

Year over year job growth rose to 2.5% and the region far outpaced the 1.8% growth for the nation and 1.6% state job growth. Job levels in California rose by 46,000 in April reversing the trend of recent months of more modest gains. 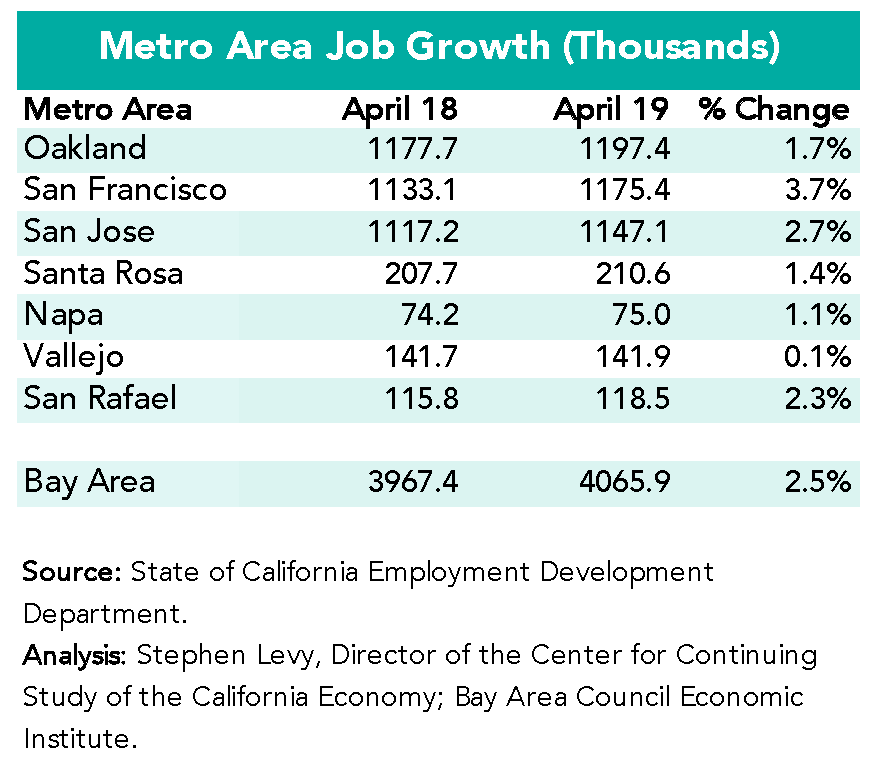 Unemployment rates fell to 2.5% in April 2019 compared to 2.6% in April 2018 with year over year declines in all metro area. It is hard to see these rates falling much further, which combined with the slowing labor force growth raises the questions of where the workers for future job growth will come from. 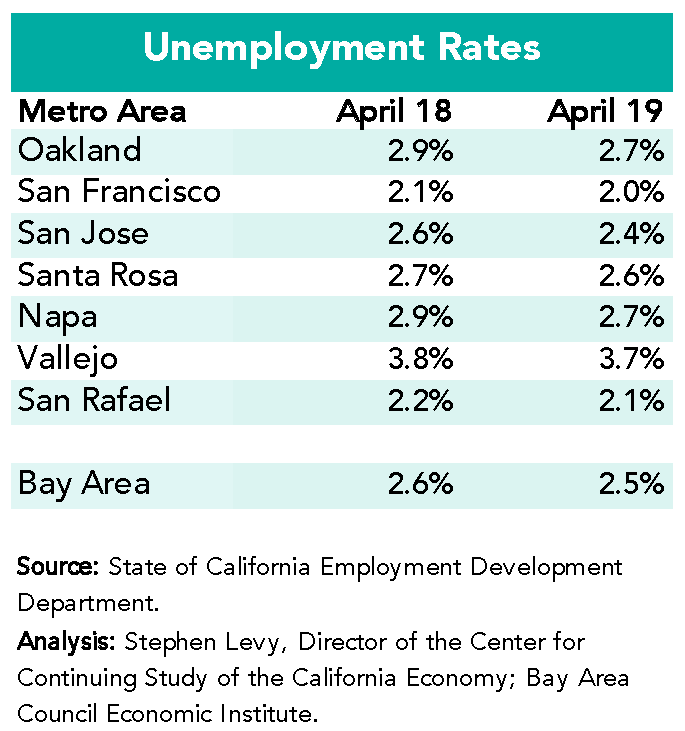 Regional labor force growth slowed in April and at 0.7% is far below the 2.5% regional job growth. It is important to note that monthly labor force estimates are volatile. 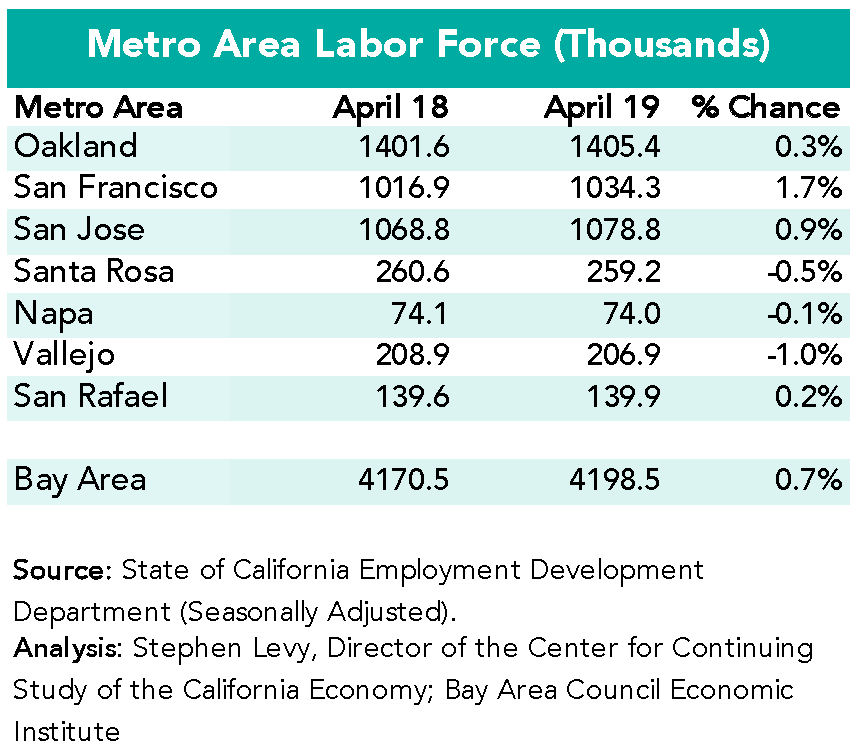 Year over year job growth has remained in a narrow range since early in 2017 supported by existing residents rejoining the workforce. This occurred despite slowing population growth and rising outmigration in the face of high housing costs. In April year over year job gains hit the top of the recent range.

Housing permit levels declined in the first three months of 2019 after an upward trend in 2018 though most of the gains came in the first six months of the year and in Sonoma County, site of the fire damage. 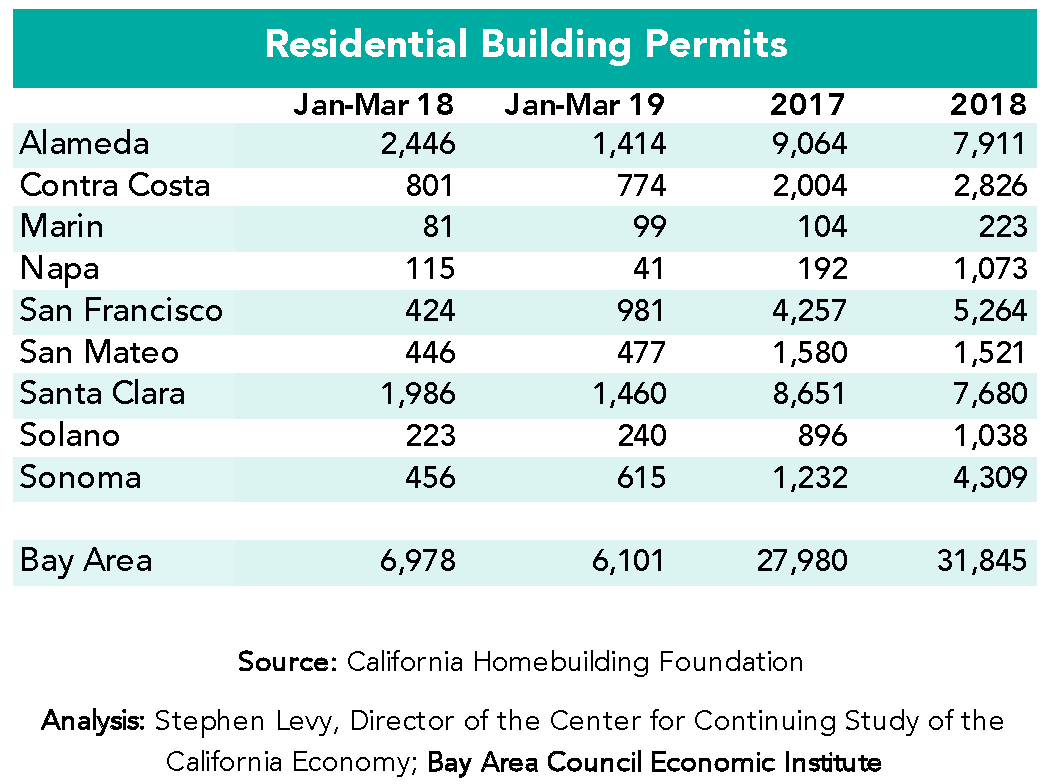 While new permit levels have declined, each week brings announcements of new projects being approved or planned for. This week the San Jose city council approved a project for teacher housing from Santa Clara University and gave approval to move forward with consideration of 8,000 homes in north San Jose without waiting for new commercial development.

The region will continue to struggle to find new workers as increasingly they will come from people moving to the region, which has become difficult given the housing shortage and high housing costs. The struggle to attract and house new workers will happen as 1 million Bay Area residents retire by 2030. Below is a link to the blog on this topic I wrote for SPUR.

SPUR published an estimate of the regional housing shortage (https://www.spur.org/news/2019-02-21/how-much-housing-should-bay-area-have-built-avoid-current-housing-crisis.) and has ongoing efforts in this area as does the Bay Area Council.