• The Bay Area added 17,600 jobs in October after two months of slow growth. Unemployment rates ticked up slightly but the region’s UE rate in October was 2.6%.

• Both the region and state showed conflicting trends between the jobs survey (up) and the household survey with rising unemployment and a decline in the labor force.

• Housing permits for the first nine months of the year surpassed both 2021 and 2019 levels though still well below the region’s new RHNA targets.

• Total and per capita income rose sharply across the region and state according to BEA estimates released this week.

All regions in the state except the San Joaquin Valley outpaced the nation in job growth during the past 12 months led by the Bay Area and San Diego.

The chart below gets wide media attention and focuses on our region’s below-average job recovery rate. The chart above indicates that the Bay Area is catching up. 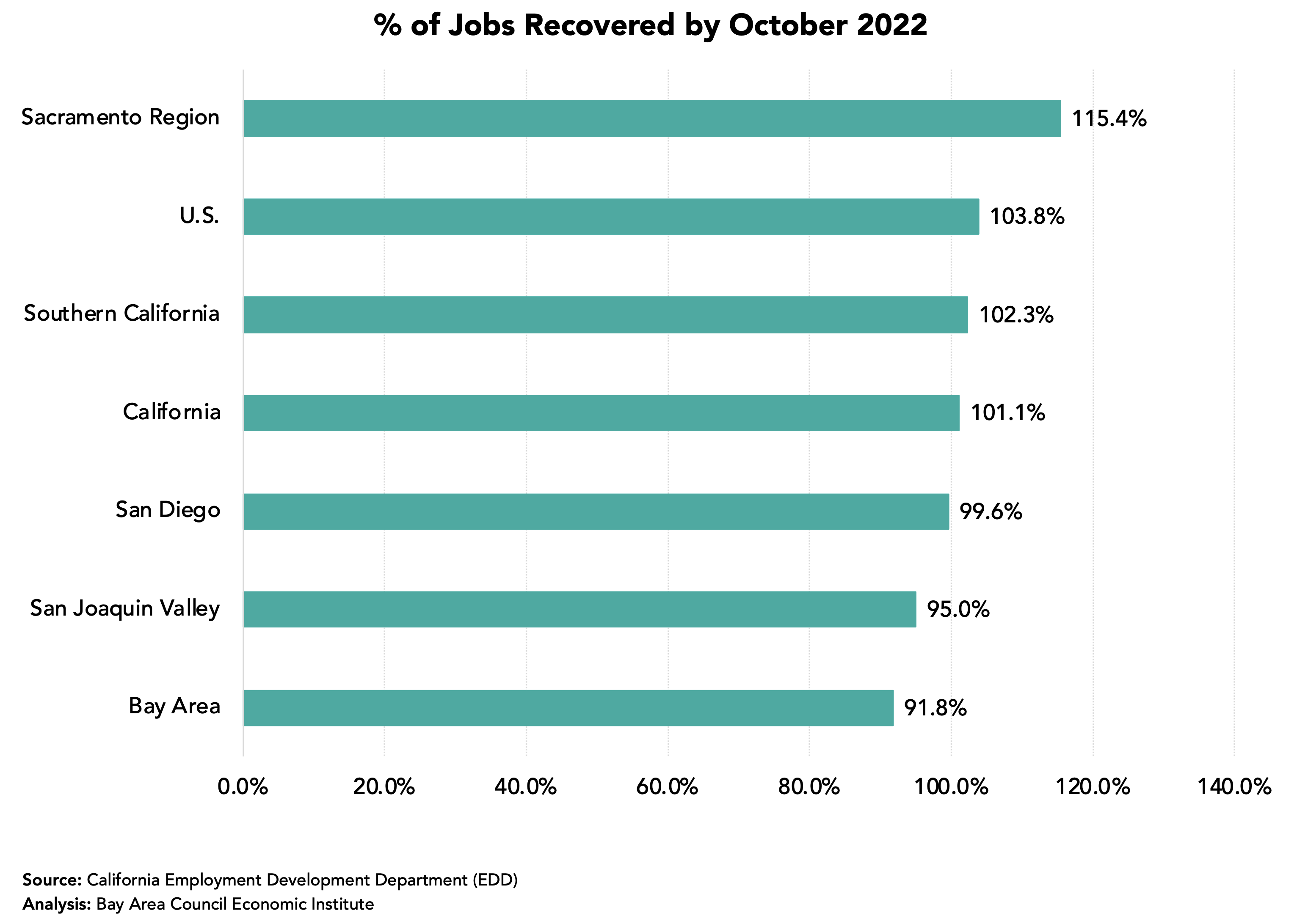 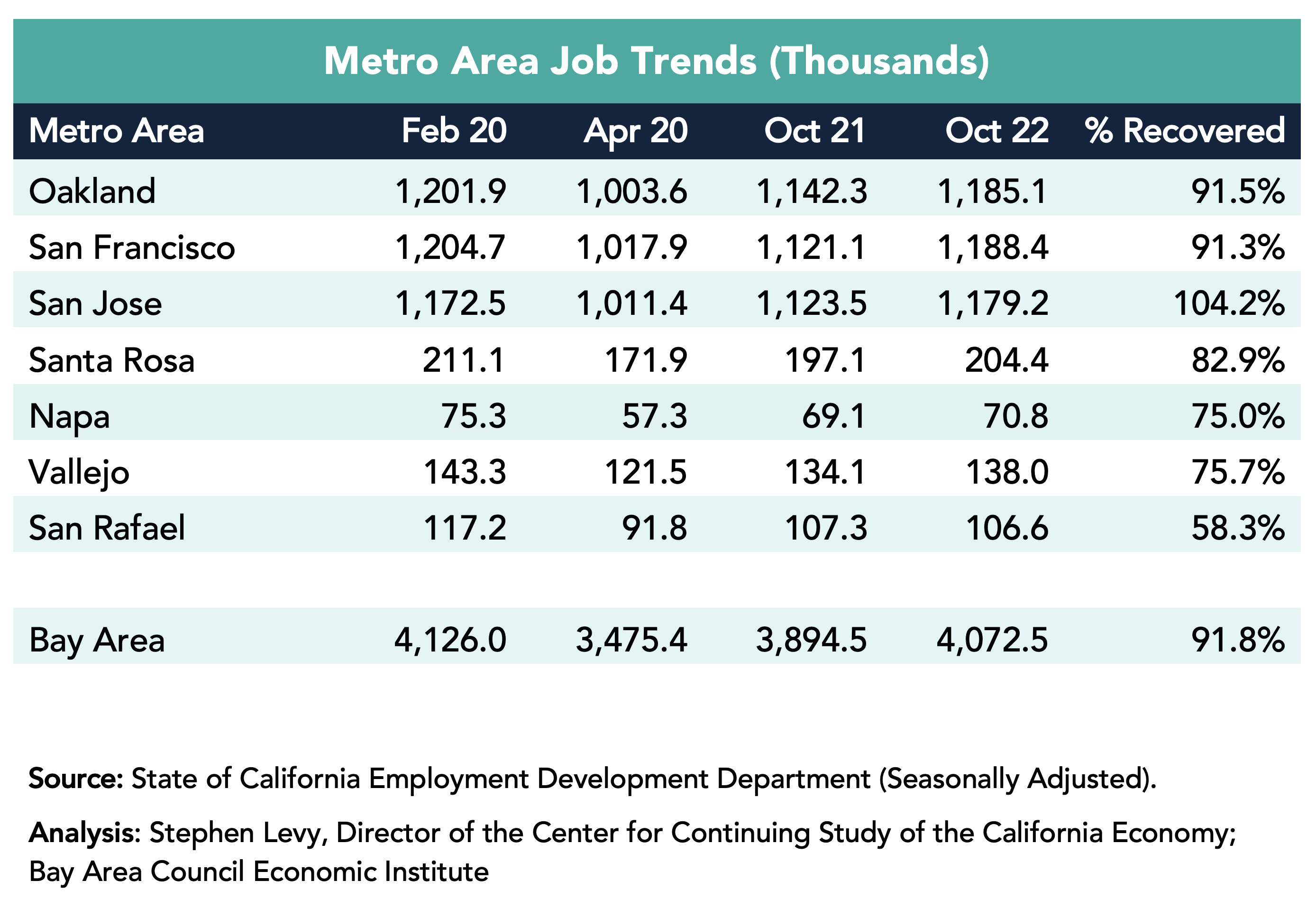 Unemployment rates ticked up a small amount in October but remain low by historical standards. The October 2022 rate of 2.6% for the region is below the February 2020 pre-pandemic rate of 2.7%. 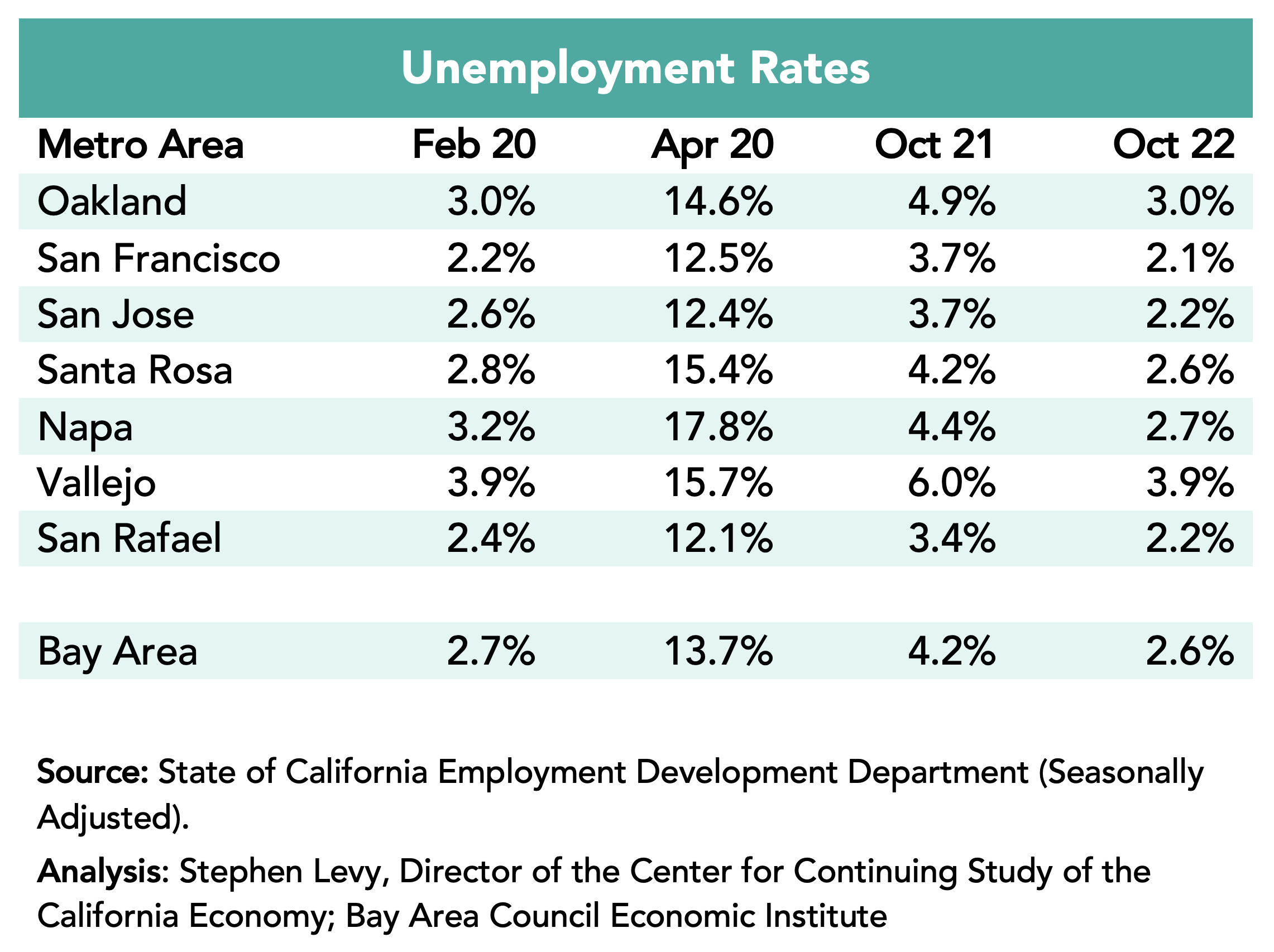 Though the recent pace of job growth has been encouraging, it is not clear where new workers will come from with low unemployment already and low population growth. Perhaps the new school year going back towards normal will allow parents who dropped out to return to the workforce. And it is possible that more workers can come from remote locations so the Bay Area and state can see job growth without more residents working. Job openings remain high and sectors like air travel are constrained by lack of enough workers. Increasing the level of immigration would be a large help to the region and state. 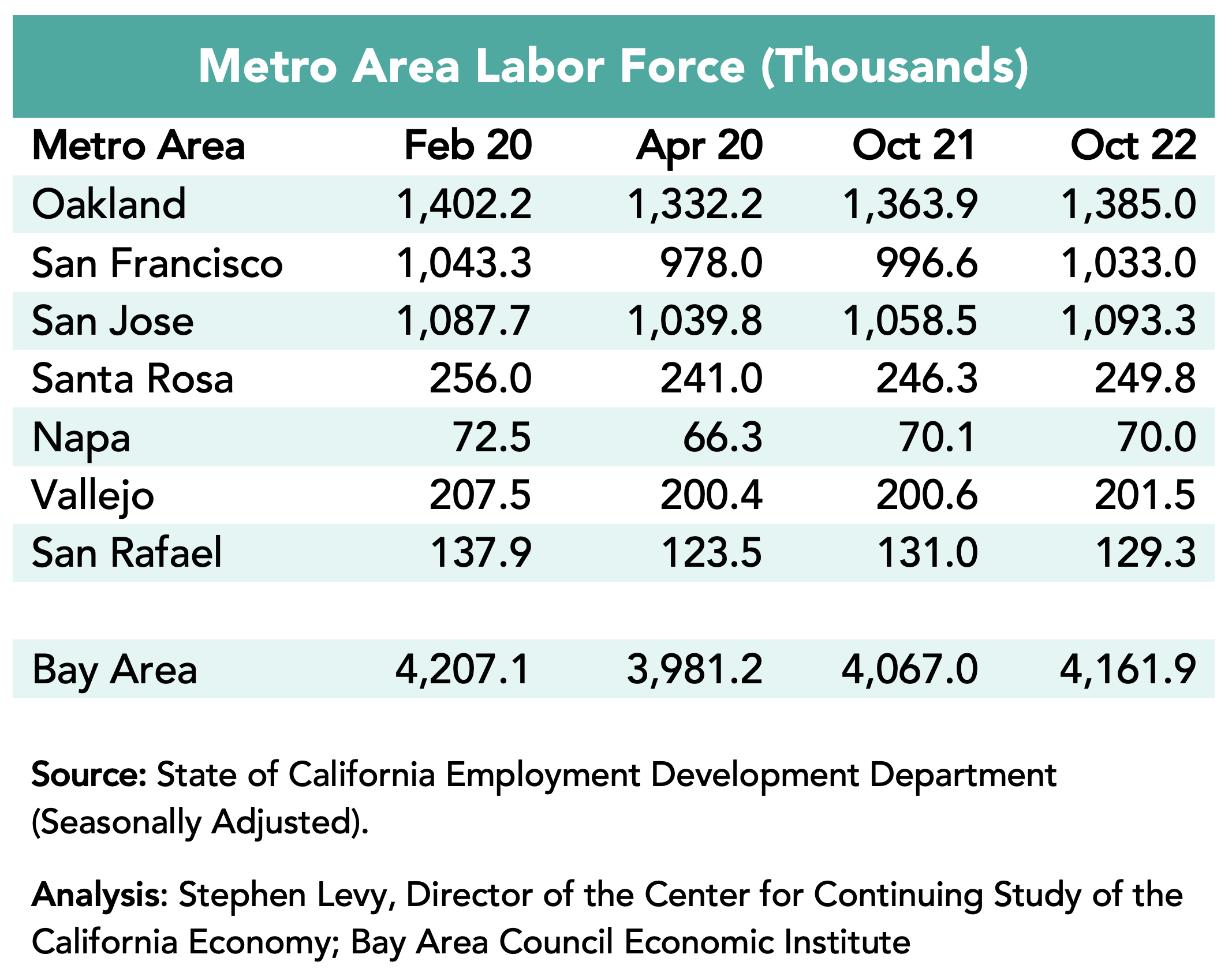 Permits levels in the first nine months of 2022 exceeded 2019 and 2021 levels though East Bay permit levels were below earlier levels.
The other counties showed large year over year gains. In addition, now there are almost daily reports of new housing projects being proposed and approved though it is often a long step until these units are completed and on the market.
Bay Area cities are updating their Housing Elements currently and learning about the requirements to meet their RHNA goals. It is possible that the RHNA and update process is encouraging cities to loosen development standards and to approve more projects.
While the current growth in permits is a positive sign, these levels are still below the RHNA targets for the region. More needs to be done. 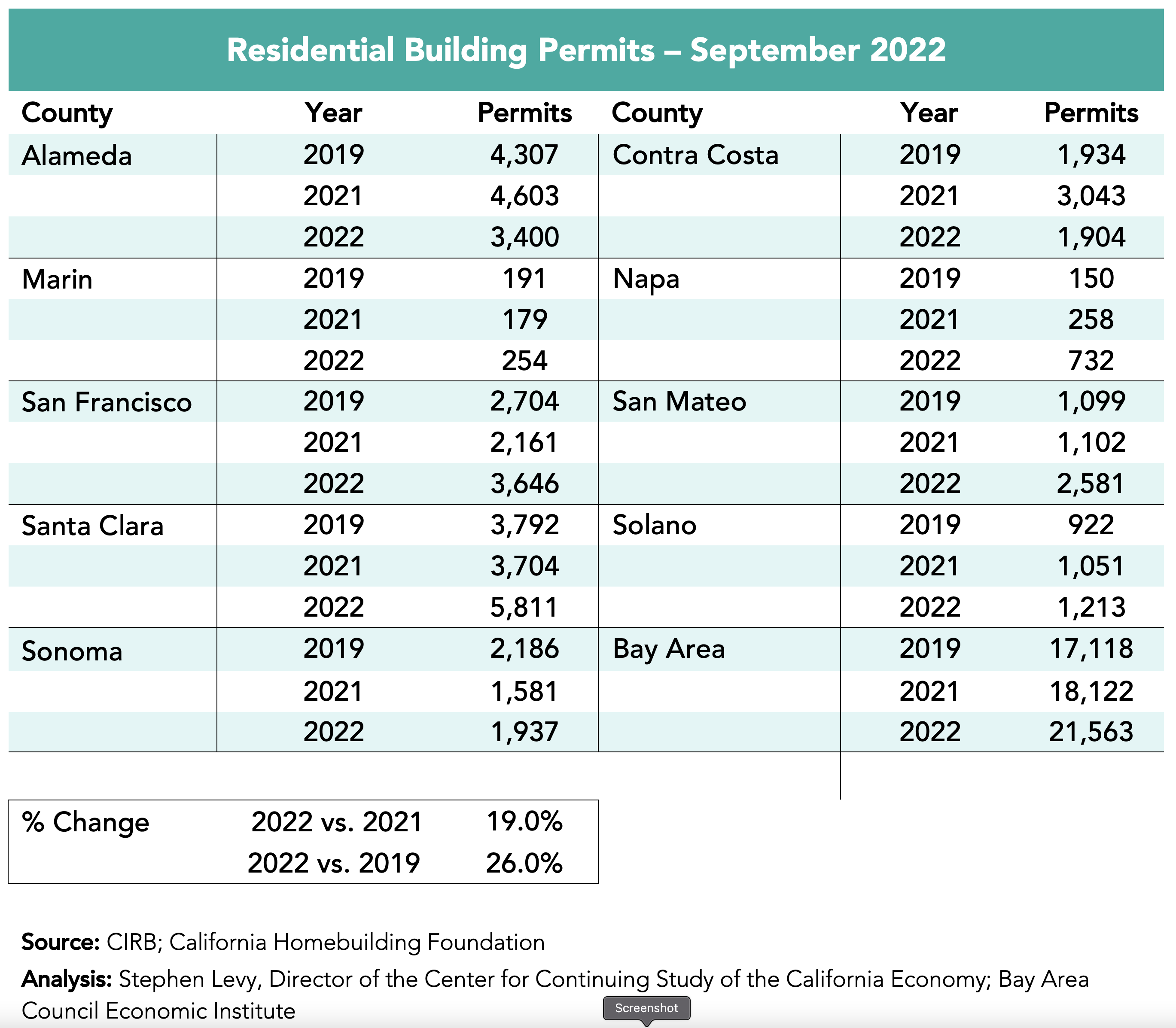 Strong Gains in Income in 2021

Total Personal Income rose by 18.6% in the region between 2019 and 2021 according to estimates released by BEA on November 16th this year. And per capita income rose by even more as most counties lost population during this period. 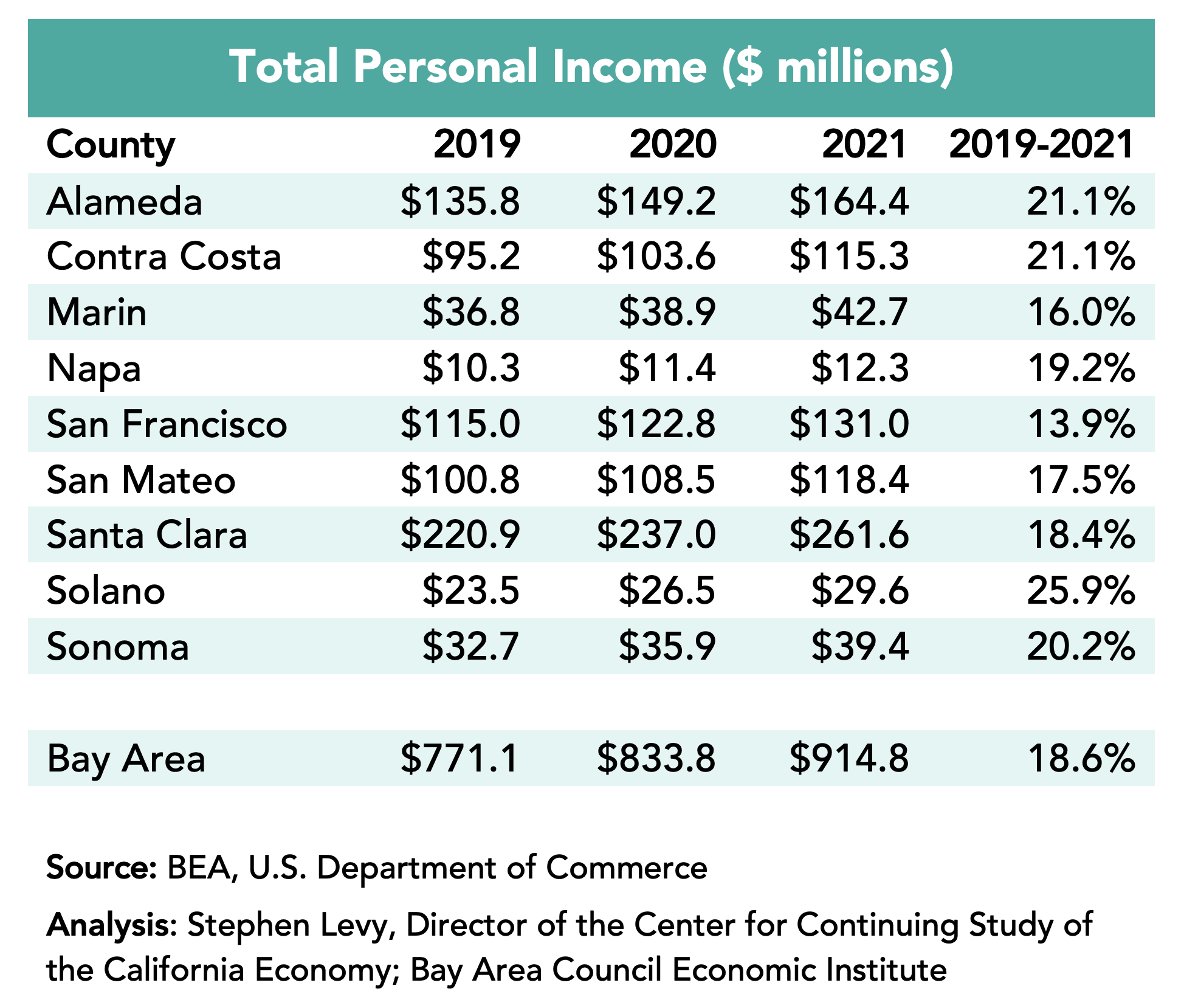