Bay Area job growth accelerated in September and October. At the same time VC funding has reached record levels, housing permits have begun to rebound, the Governor signed several housing bills and the region is a leader in vaccinations and lowering COVID cases. Congress passed an infrastructure bill and international travel restrictions have been eased. The Bay Area still faces challenges in housing, transportation and other areas that affect our economic competitiveness and, in doing so, reduce our ability to meet equity and environmental goals.

• The U.S. economy is recovering even as inflation and supply chain challenges remain and COVID cases are rising again. At the same time immigration and tourism are on pace to increase and some infrastructure spending could start next year.

• The region is a state and national leader in vaccinations and reducing COVID cases that is allowing a return to more normal living here.

Job growth accelerated in the past two months with gains of 21,100 jobs in October and an upward revised 18,200 jobs in September. There were strong gains in Professional and Business Services as well as a continuing recovery in Leisure and Hospitality. 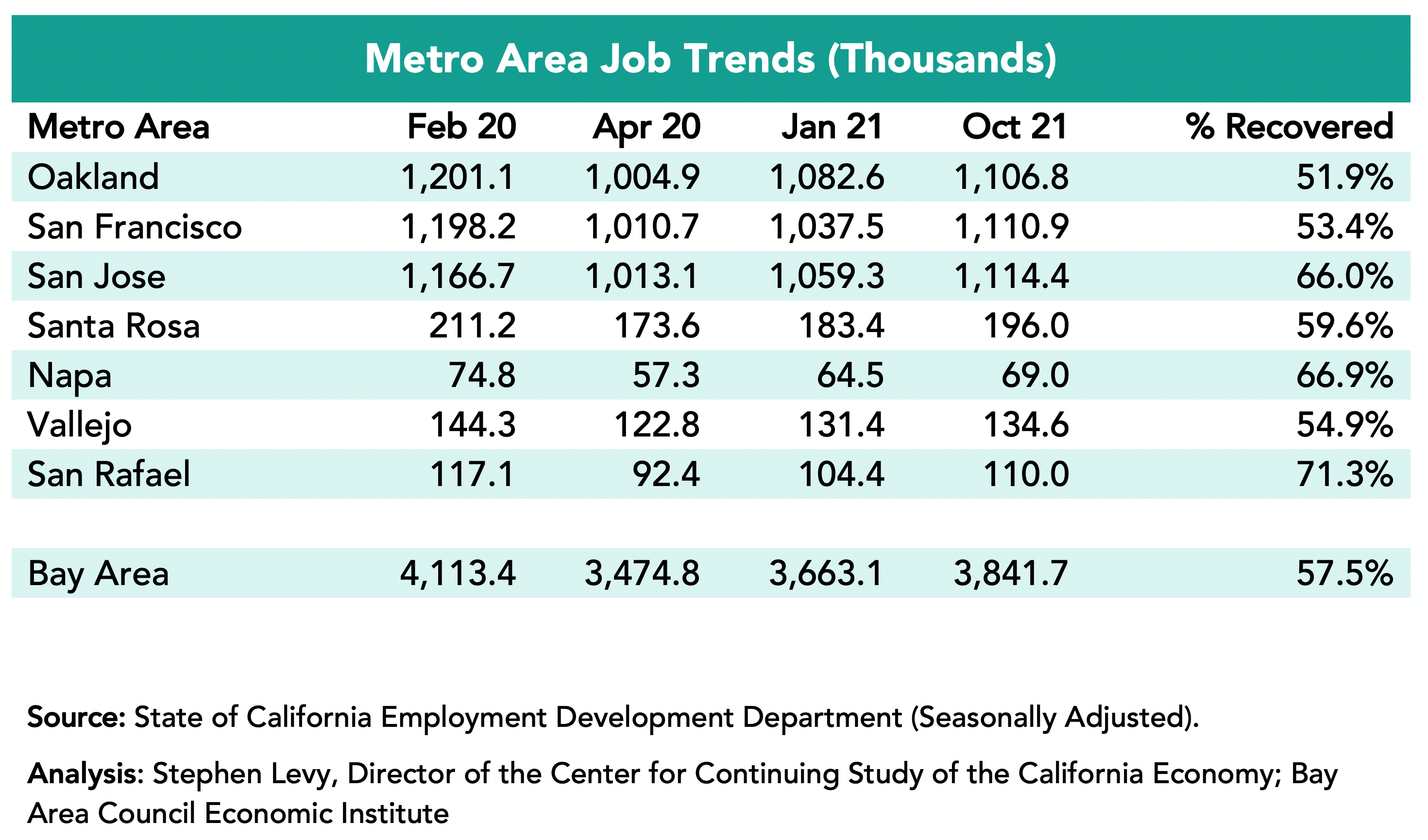 The Bay Area Had Recovered Just 57.5% of Lost Jobs by October 2021 Yet VC Funding is Surging and Tech Jobs Are Above Pre-Pandemic Levels 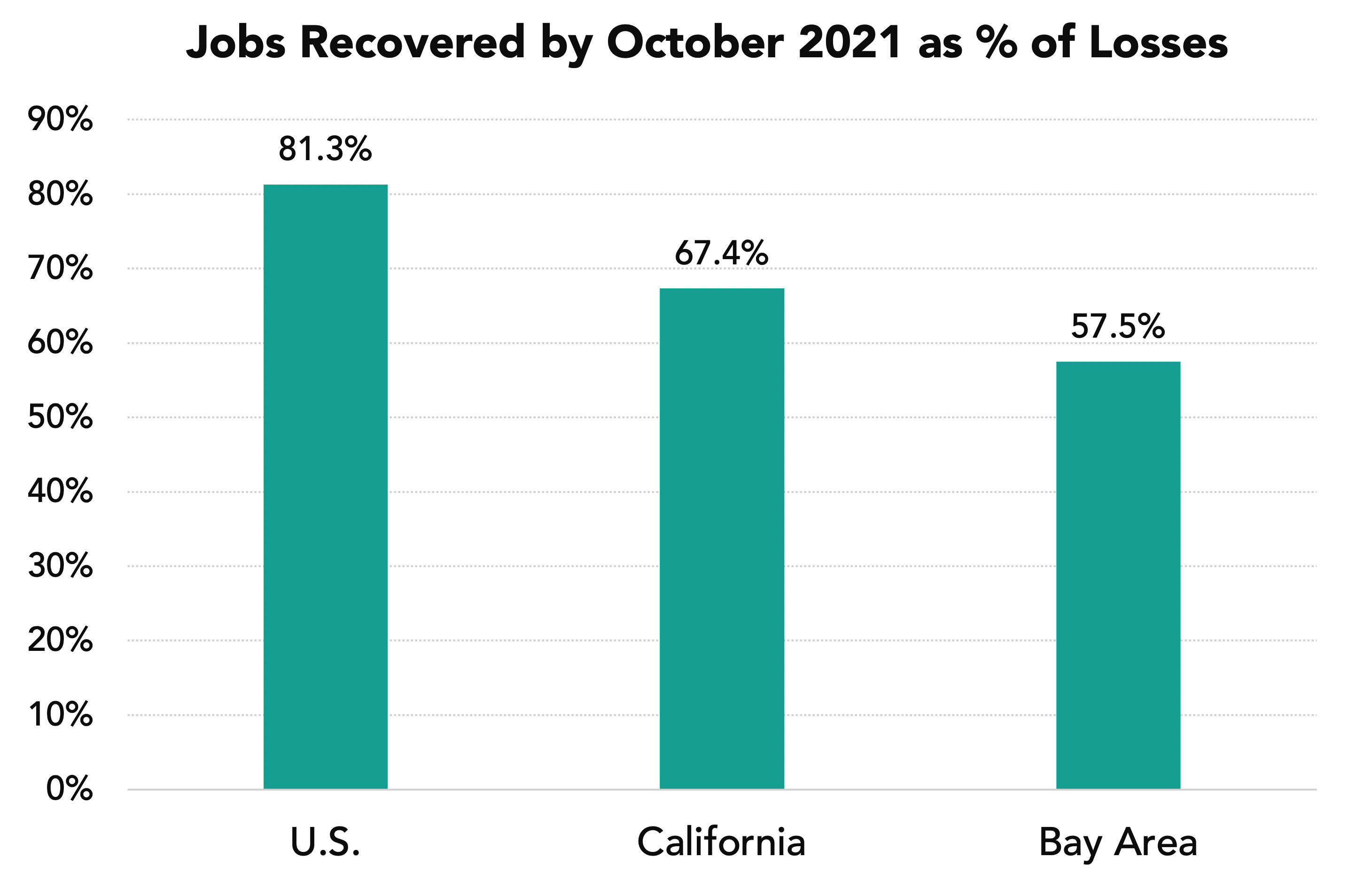 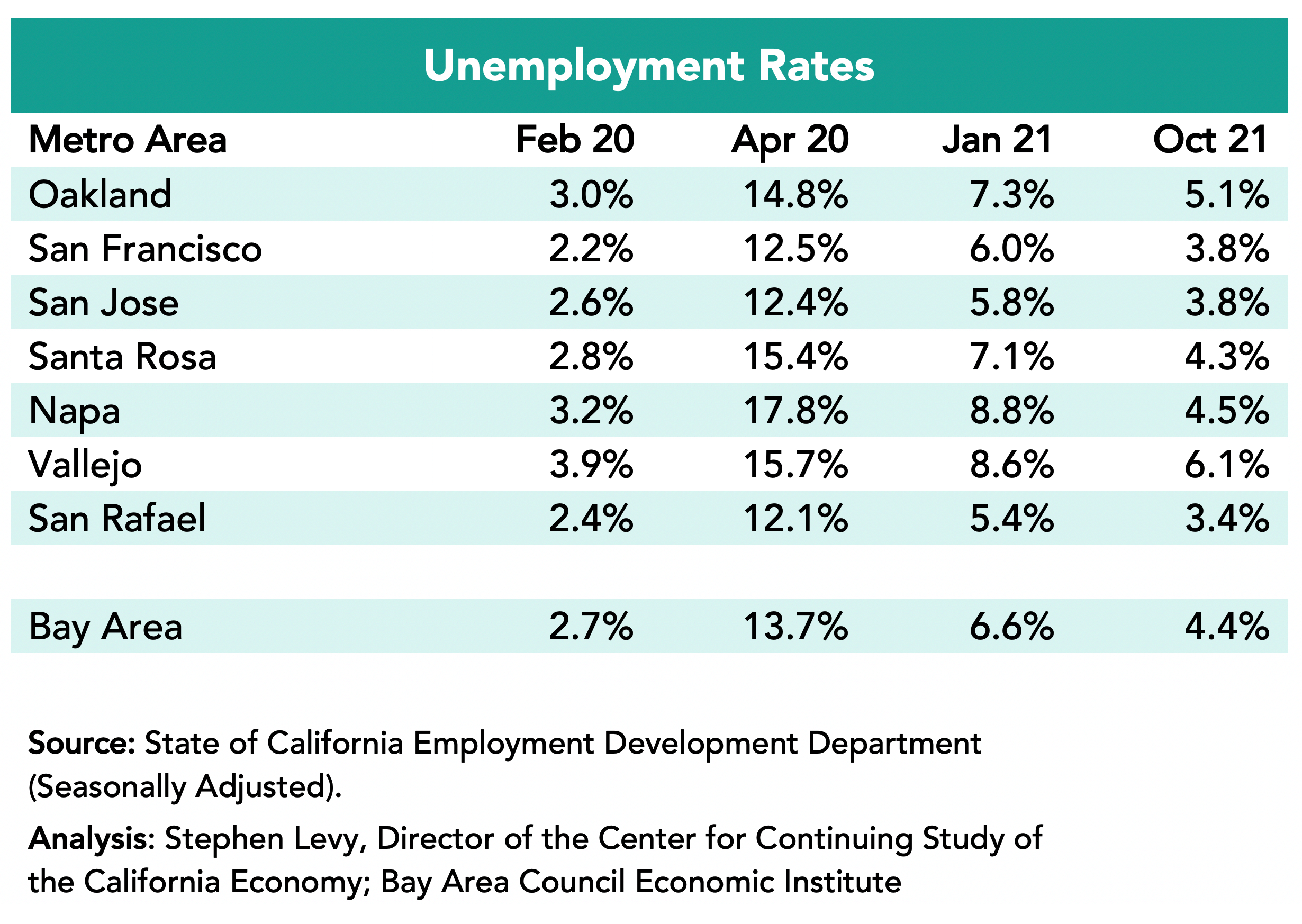 The Information sector actually added jobs compared to before the pandemic hit. And the Professional & Business Services sector is also above pre-pandemic job levels. On the other hand, the Leisure and Hospitality sector recovered only 55.0% of lost jobs by October 2021 though travel and tourism are now picking up again. The Government sector has fewer jobs now than in April 2020 though many jobs may be returning as schools and colleges reopen. The Construction and Manufacturing sectors have recovered most of the jobs between February and April 2020. 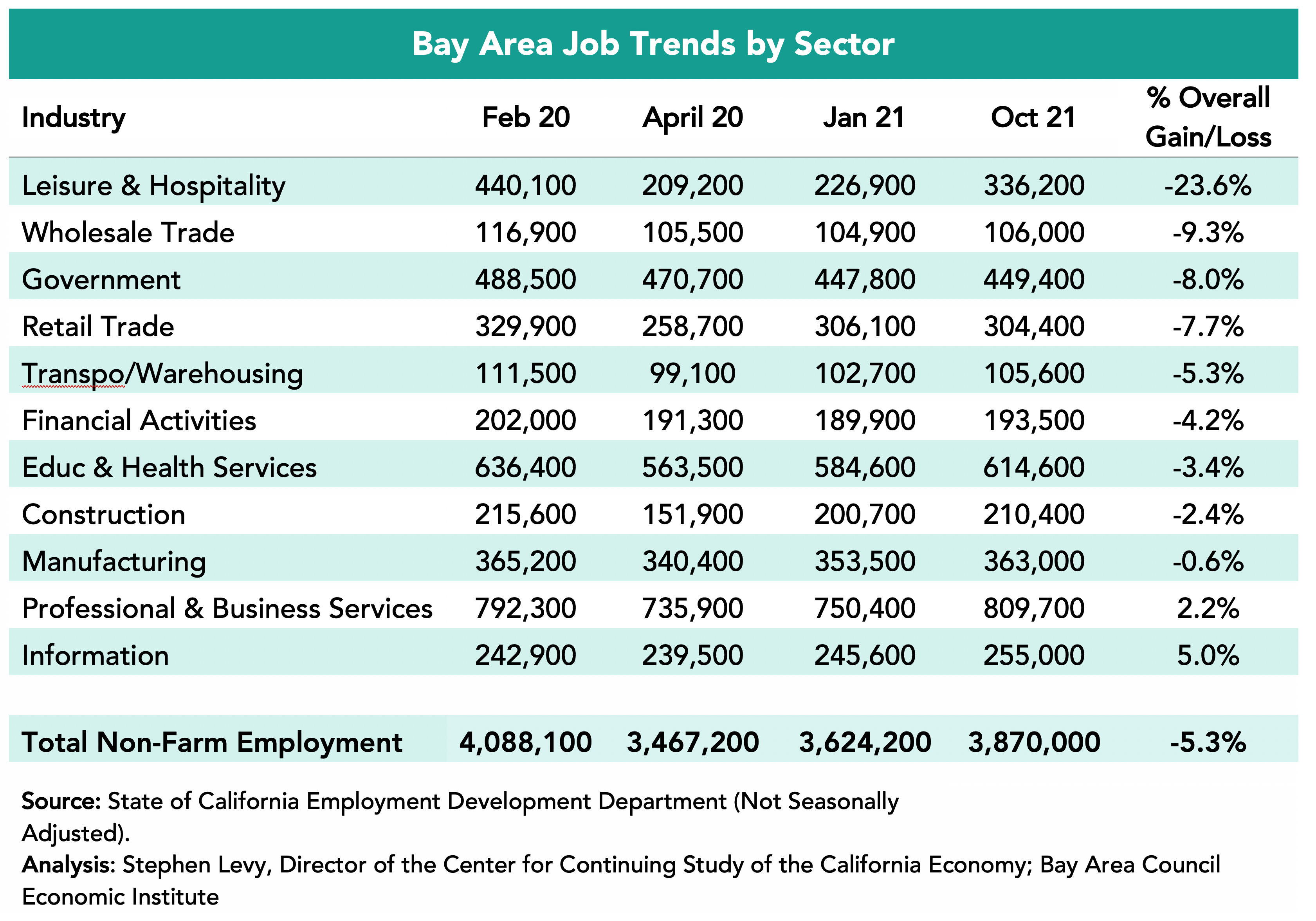 Housing permit levels are up over 2020 in the first nine months of 2021 but still slightly trail 2019 comparable months. But recently many new developments have been approved or proposed in places like Oakland and San Jose and in other cities as well as new developments being proposed. 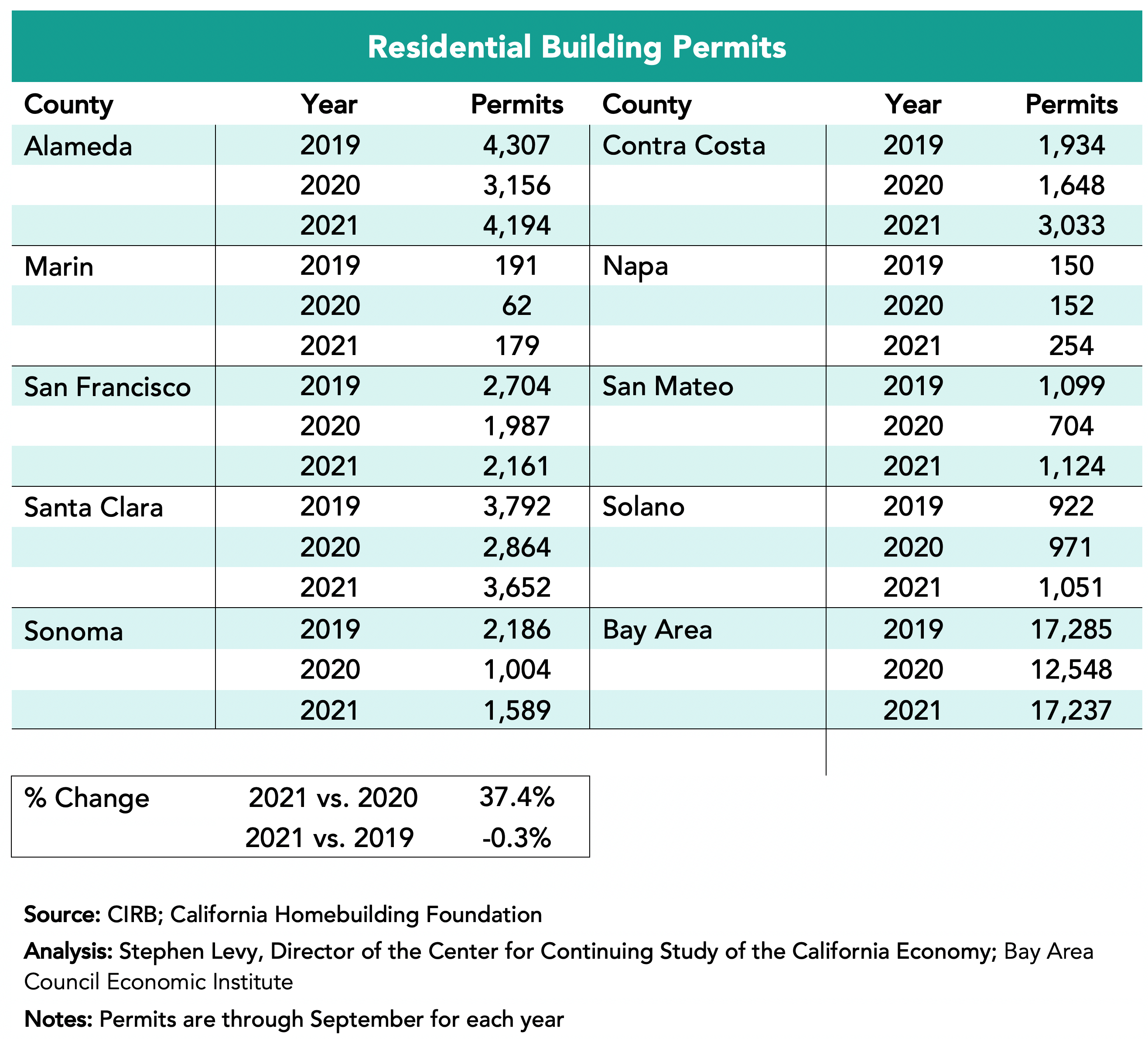 We have the paradox of continuing reports of headquarters’ relocations outside of the region at the same the region is capturing record VC funding levels and tech jobs are slightly above pre-pandemic levels. Yet, the Bay Area Council warnings about losing our competitiveness remain as housing and mobility challenges are far from solved—the major causes of recent movements of companies and residents.

The rebound from pandemic related economic losses will continue but new policies are needed to maintain and improve the long-term competitiveness of the Bay Area economy. There is now increased movement to integrate our many transportation systems and agencies and pursue fare integration in an effort both to improve but to maintain the solvency of our main public transit options.